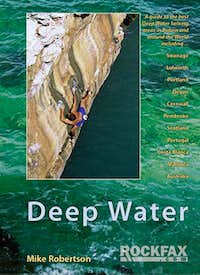 In the last fifteen years the branch of sea cliff rock climbing referred to as Deep Water Soloing has grown in popularity and spread its watery wings around the Globe. Deep Water is the first guidebook dedicated to documenting the major areas that have seen significant amounts of Deep Water Soloing interest and development over this period. The main author, Mike Robertson, was one of the first climbers to ditch the rope and security of standard protection and rely upon the safety-net of the sea. Mike has travelled far and wide, developing new routes and climbing old sea cliff lines in the Deep Water Solo style, and has published many articles and photographs in climbing magazines worldwide.

Deep Water Soloing is a sociable activity that has been popularised by several summer festivals and, during the warmer 'in' seasons, many of the popular venues documented in Deep Water see plenty of action from first-timers and old hands alike.

The first experience of Deep Water Soloing is for most climbers a major revelation, allowing the movement and flow of the climbing to be appreciated to the full without the encumbrance of a rack and rope, as well as the surge of excitement as progress is made above the water - if you can swim, try it!

The routes in the guidebook are described in full and are attributed Sport Grades in conjunction with the now accepted S-grade that gives an indication of the climb's seriousness, with regard to height above the water, and tide considerations. The difficulty of the routes included spans all grades, ranging from dreamy grade 4s, 5s and 6s above the warm waters of Asia and the Mediterranean to many hard grade 7s and 8s, some above the less-tepid seas of Northern Europe and the Southern Ocean.

The majority of the destinations covered in Deep Water are distinctly exotic and are a must for the climber who loves sun, warm water and stunning routes.

The information is presented in the full colour Rockfax photo-topo style and includes crucial advice on when and how to tackle the deep water solos. The guidebook is enticingly illustrated with many stunning photographs, the majority taken by Mike Robertson. As a stand-alone comprehensive reference book, or an essential companion to the guides to the venues, the Rockfax book Deep Water, is an essential read.

Deep water
Deep Water Soloing is something of a niche activity and as a consequence there are few guides dedicated to it. It is therefore difficult to review this book as there is little to compare it to. That said, it is not totally isolated as it follows the same format as Rockfax's other guidebooks, which are always well presented and easy to use and therefore seen it this context we can judge it on those grounds.

The book covers many different crags over a large geographical area and therefore my experience of using it is limited. However, I can confirm that it's descriptions of areas in Pembroke area excellent, with my personal favorite being Barrel Zawn, which is near St. David's.

In summary, the guide is easy to use and covers all the right detail. It is both an excellent introduction to DWS and useful to this with experience and is well worth your hard earned cash if that's what your into.