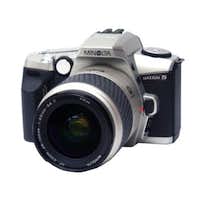 Description: So, you know about the high performance and superior image quality you can get with a Minolta Maxxum AF SLR camera, but you say that all SLR cameras are too big and bulky to carry around? Well, Minolta heard you.

Introducing the Maxxum 5 – the world’s smallest and lightest 35mm AF SLR.* It’s easy to pack, carry, and handle, so you can instantly react on your creative impulses anytime and anywhere. Plus, the Maxxum 5 houses a powerful array of high-performance features that will quickly satisfy beginner photographers and yet be valuable tools for photo hobbyists. If you want a true take-anywhere SLR, the little Maxxum 5 is the big winner.

The Minolta Maxxum 5 measures only 5 x 3.42 x 2.38 inches and weighs in at 11.8 ounces without batteries. It's the AF SLR camera you'll want to (and be able to) take along wherever you go.

Fastest Autofocusing in its Class

The Maxxum 5's high-response autofocus system makes sure your once-in-a-lifetime moments will be razor sharp. This new-generation Maxxum features an improved high-power AF drive motor and high-speed microcomputer for quicker and more precise AF control. It tracks even fast action and random movements effortlessly, right up to the moment the shutter releases.

The Maxxum 5 uses Minolta's new 7-point AF system. The focus sensors are laid out in a wide area to the "rule of thirds," so you have the creative flexibility of positioning your subject anywhere within the focus frame. The center crosshair sensor keeps the focus sharp regardless of vertical or horizontal subject contrast.

When using the wide focus frame, you'll always know exactly what your Maxxum 5 is focusing on. Minolta's LED-illuminated superimposition technology highlights the focus sensor being used.

For creative image compositions, you may want to switch between the wide focus area and the local focus areas to single out an off-center subject without recomposing the shot. No problem with the Maxxum 5 - its local focus areas can be individually selected.

Sometimes a perfect photo opportunity happens in the blink of an eye. The Maxxum 5 is ready when you are -- with Eye-Start Automation. Eye Start saves precious seconds and activates autofocus and autoexposure the instant you bring the camera to your eye. With one quick action, the camera starts working so you won't miss a split-second moment.

The Maxxum 5 is all about speed, precision, and power. That's why it features a top shutter speed of 1/4000 second, which can stop fast action or let you take beautiful portraits using large apertures under strong light. The Maxxum 5 also features a maximum flash sync speed of 1/125 second.

For capturing action as it unfolds, set the Maxxum 5 for continuous film advance. The film advances at 3 frames per second as long as you hold the shutter-release button down.

This security feature prevents the camera back from being opened while there is usable film in the chamber, thereby protecting your film from accidental exposure.

This professional feature lets you check the zone of sharp focus at a given aperture before taking the picture. DOF preview is especially useful to check subject and background sharpness when using small apertures, or to see the extent of sharp detail in macro photography.

The Maxxum 5's state-of-the-art metering system delivers accurate exposures under a diverse range of lighting and subject conditions. It measures light levels from 13 segments in a honeycomb pattern across the viewfinder frame, plus the background area. And much like a professional photographer, this intelligent metering system emphasizes the meter segments surrounding the focus sensor in use.

When you want to bias the exposure according to a very small section of your subject or scene, use the Maxxum 5's spot metering mode. This concentrates the meter's sensitivity into the center segment.

Maxxum 5's advanced exposure technology can be combined with a variety of creative exposure controls. Exposure can be compensated up to +/-3 Ev in 0.5 increments. And to ensure the optimum exposure for high-contrast scenes, three brackets can be made in 0.3, 0.5, 0.7, or 1.0 Ev increments. Also, a multiple exposure mode overrides film advance to allow an unlimited number of exposures on a single frame.

When using Maxxum HSS flash units, the Maxxum 5 is able to use flash sync shutter speeds up to 1/4000 second. High-Speed Sync allows much more control between the ambient light exposure and the flash exposure, particularly under bright light conditions. HSS is a valuable asset when taking portraits outdoors because it lets you select large apertures to create a shallow depth-of-field, which makes the subject stand out from the background.

This exclusive Maxxum feature lets you use multiple Maxxum program flash units off-camera without cords or connectors. The flash control signals are sent from the Maxxum 5's built-in flash. Using the built-in flash as fill light, the ratio flash function controls the flash units to give a lighting ratio of 2:1. With off-camera Maxxum Program Flashes 5600HS(D) and 3600HS(D), the flash can synchronize to the maximum shutter speed of 1/4000 second.

Subject Program Selection gives beginner photographers the ability to control the camera according to the subject, without a working knowledge of apertures and shutter speeds. Five modes are available, each ideally suited for a specific type of shot. Choose from portrait, landscape, close-up, sports action, or night portrait.

Loading film is a snap with the Maxxum 5. All you do is insert the film cartridge and position the film leader. The camera sets the film speed then threads, advances, and rewinds the film automatically. You can activate power rewind anytime.

The Maxxum 5 is the only camera in its class to offer 14 custom functions so you can custom-tailor your camera to suit your style or preferences.

The Maxxum 5 is a camera you can grow with. It is part of the Minolta Maxxum AF System and accepts all Maxxum lenses plus other accessories like Maxxum HS and Macro flashes, remote cables, Maxxum camera case, and more.

Untitled Review
This is a great camera for me right now. It takes great pictures, isn't not too expensive, and it's light enough to hike with easily. It has a lot of great features including DOF preview.

My major concern is with Minolta though. I was hoping to get a digital SLR body that would be compatable with my lenses within the next year or so, but unfortunately, Minolta does not yet have one. While Canon has a DSLR for under $1000, there are no options from Minolta right now. They plan to come out with a digital Maxxum 7 in October, but I'm sure the price will be very high, as it is their first DSLR.

This doesn't take away from the performance of the camera, which is up to par with similar Canons or Nikons, but I'm just worried about expanding my photo equipment with Minolta.

My Camera
I have this camera but I don't use it because I have a much better Minolta SRT 101.