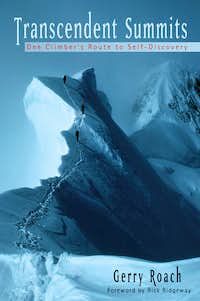 "This is Gerry’s first narrative. Autobiographical in nature, it examines his roots as a mountaineer during his youth and first decade of serious mountaineering. More than reflective, it looks for the inner motivation as felt by a young, headstrong lad. The concept of a Transcendent Summit matured over time as the lad grew into a boy, and later, as boy became man.

Often taking a humorous turn, this tome plies the routes and peaks of Gerry’s youth: the Third Flatiron, T2 in Eldorado Canyon, Longs Peak, the Grand Teton, the Mexican Volcanoes, the highest peaks in Hawaii and Norway, Rainier, and Denali. It is rare that a climber looks back across so many years with such a keen perspective, but Gerry has done just that."

Best to pick up a copy from Gerry's site (link above).

Great read
This is an excellent book. Gerry's writing style is easy to read and intriguing. A n excellent addition to a mountaineering library.