Twin peaked Pu'u Konahuanui is the tallest mountain in the Ko'olau range, on the island of Oahu. It is often known simply as Konahuanui (Pu'u means simply mount). Konahuanui translates basically to "large testicles," which is based of an Hawaiian legend in which a giant throws his testicles at a woman, and they land and form the two peaks of Konahuanui. The climb to the summit of Konahuanui is steep and eroded, but not long, and not the hardest hike in the Ko'olau Mountains. The summit region of Konahuanui is nearly a living catalog of the common and some of the uncommon plants found in Hawaii's wet forests. The views are spectacular on the rare clear day, but being on Konahuanui in the clouds is an equally special experience.

The most popular way and the only one that is a reasonable option for all but those with vast Hawaii hiking experience is the Konahuanui Trail, which is the remnants of an old Hawaiian trail and the Castle-Olympus trail which was built in 1911. This Trail begins at the end of the Pauoa Flats trail, at the Nu'uanu Lookout, part of the Honolulu-Mauka Makiki-Tantalus trail system. There are many different routes one can take to the Nu'uanu lookout on this popular trail system. The choices of trails and trailheads are the Pu'u Ohia Trail, Manoa Cliff Trail, or Kalawahine Trail, which all start up along Tantalus/Round Top Drive (Driving directions below). Another option is to start lower down in Manoa valley, and start on the insanely popular Manoa Falls trail, however this involves significantly more vertical gain.

All of these trails are well signed and all lead to the Pauoa Flats trail, which will take you to the Nu'uanu Lookout where the trail to Konahuanui begins. A topo map of these well used and maintained trails is available here and is helpful in choosing which of these trails to use and navigate. Kalawahine is probably the most direct route, but the views from Manoa Cliff and Pu'u Ohia are more interesting to most.

From the lookout, your hike really begins. The entrance to this unofficial trail may be slightly overgrown, but look for some metal stakes in the ground and perhaps pink flagging. The trail is intentionally left this way to keep inexperienced hikers from accidentally wandering up it. After the first few feet however, the trail should be very obvious. The main route begins ascending the ridge that continues all the way to Konahuanui, mostly on the left side of the ridge. There is an older trail that sticks to the ridge proper but it is probably more overgrown. The trail countours above small gullies down the ridge through nice native Ohia ahihi forest (Metrosideros tremuloides), a species only found on Oahu. Look for red native Apapane birds, and both red and yellow Ohia blossoms. Soon both trails converge and continue directly up the ridge towards the summit.

As you continue up the ridge, you leave the higher trees behind, and have a stunning view down into Lulumahu valley on your left. Look for the different tiers of Lulumahu falls peeking out of the vegetation. Continue along the ridge, where the trail is deeply rutted from years of erosion, as it steeply climbs to the summit. The trail reaches the summit and comes to an open, grassy area, great to sit for a snack. If your lucky enough to have a clear day, the view will be impeccable. This is the summit known as K2, the slightly lower peak of Pu'u Konahuanui. There are usually several fixed ropes or straps of webbing to help hikers up the steep, slippery ridge.

From here, those comfortable with exposure mixed with mud can take a left and begin along the ridge to K1, the higher peak of Konahuanui and the highest peak in the Ko'olau Mountains. The trail is muddy and sheer cliffs to the hikers right offer beautiful views and a great variety of native plants, some rare. The hike over takes around 20-40 minutes, and is well worth the time. This is not a good place to take a fall, because falling left or right could be fatal in some areas. After reaching K1, be sure to look down the steep ridge as it continues north, and look down to the tourists peering over the Pali lookout far below. Descend the same way you came up, back to K2 and down the ridge.

The other options for getting to Konahuanui are seldom attempted and highly dangerous. You can feasibly approach Konahuanui by following the main Ko'olau ridge, either up from the Pali Lookout or over from Mt. Olympus, but from both directions the ridge is steep, loose and overgrown. Another steep ridge, parallel to the standard route reaches Konahuanui from the floor of Nu'uanu. This has only been completed a couple of times and people have fallen and died on this ridge. There is a another, extremely steep ridge that comes up to Konahuanui from the windward, east side, called Piliwale, but this is also steep, loose, overgrown and like the others, should not be attempted without experience on steep Hawaii ridges and a high comfort level with exposure on loose terrain.

First you must get to Makiki Street. From H-1 Freeway town-bound (west-bound), get off at the Wilder Avenue Exit. Follow Wilder to Punahou street, take a right on Punahou, then take your second left on to Nehoa at the light. At the next light take a right onto Makiki St. If your heading east on H-1, take the Punahou Street exit and take a right up Punahou to Nehoa, where you take a right, and a right onto Makiki St at the first light. Round Top Drive and Tantalus Drive form a ten mile loop starting here. Makiki Street officially ends and turns into a fork at a park with a pumping station. Going at the fork takes you up Round Top Dr, faster half of the loop for Manoa Cliff Trail. The left fork takes you up Makiki Heights drive. When it ends, take a right and it will take you up to the Kalawahine Trailhead. The Pu'u Ohia Trailhead is about 5 miles up either way you take the fork, so it doesn't matter which one you take. Maybe take one up and the other way down.

Driving Instructions for Manoa Falls Trailhead:
From Waikiki, take McCully Street out of Waikiki toward the mountains. Turn right onto Kapiolani Blvd. Turn left onto University and drive through the University of Hawaii campus. Turn right onto Manoa Road. This will dead end at the trail head.

From H-1 East or West bound take the University off-ramp and turn towards the mountains on University, then follow the above directions.

The Konahuanui trail is within the Nu'uanu Watershed and is most likely technically closed to hiking (although there is some gray area there). That being said, the state, which manages the watershed, is well aware that people frequently hike the trail and know that the Hawaii Trail and Mountain Club maintains the trail at least once a year with a crew of 20-30 volunteers. The main reason the trail is not technically open is to keep inexperienced and unknowing hikers from the easy and popular Honolulu-Mauka Trail system wandering up onto much too difficult terrain. There is no enforcement of the watershed hiking requirements and there isn't even a sign anywhere on the trail or nearby. There is no one to enforce such a ban, and if there was an enforcement agency it is highly doubtful they would go near the Konahuanui trail. At least in the last 10 years, no one has been fined or even warned about using the trail. Many people hike the route every year. 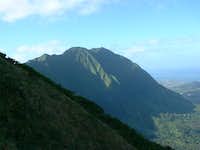 Konahuanui is frequently shrouded with clouds all year round. The entire Ko'olau range can be clear but often Konahuanui will still be socked in. You are more likely to catch a clear view in the early morning, but this is by all means not a rule and you can have many cloudy and rainy mornings on the summit, and clear afternoons are not unheard of. Summer is generally more clear than winter, but the summit can be clear in winter and rainy in summer. In the rain, the steep trail gets very slick and muddy, and can be quite dangerous, but being at the summit in the clouds and even rain is very unique and a special experience for those willing to brave the slick mud. Expect the summit to be very windy all year round.