This time when my friends and I went to the Maze, it was May right after school was out and we only had passenger cars. This backpack was to be a part of a much longer two week trip through southern Utah. After going through the permit process at the Hans Flat Ranger Station, we carefully drove our cars to the top of the Fling trail switchbacks where we had to park. Along the way I was able to get some nice panoramas. The plan for this go around was to walk the road down until we got to the Golden Stairs Camp and descend the Golden Stairs route to start.

Just before getting to the start of the trail after a long road walk, we looked over the cliffs at the panoramic view we had and crossed the China Neck. This wasn't as narrow as I had thought but it was very cool nonetheless.

The descent went a lot longer that I was expecting due to the long distances spent bench walking but the views were fantastic. Upon finishing the descent we got a close look at the Mother and Child rock.

Finishing the descent of the Golden Stairs 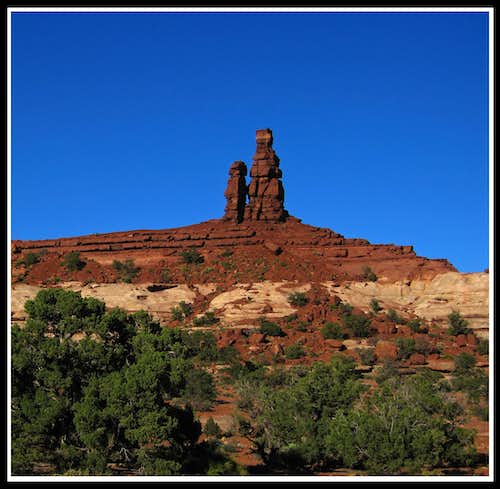 We walked a little more on road until we found the start of the Ernie's Country route. The plan was to take this route to the Dolls House. We started doing this narrow trail with very mature cryptobiotic soil all around us. It was amazing to see how much better preserved the soil is within the National Park than in other more public areas. We filled our water at the spring located up one of the side canyons. 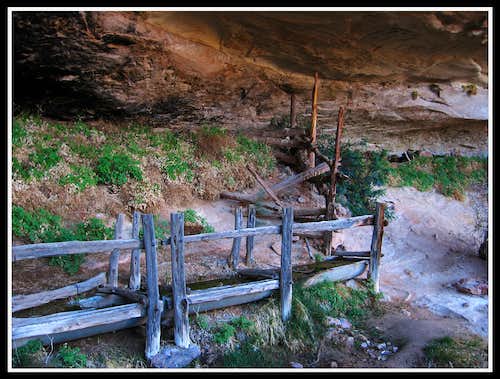 One of only a few water sources in the Maze

As we continued the sunset was looking better and better. Shot a great panorama looking into Ernie's country. Shortly after this was taken we did one last climb up and over the ridge to the next valley and found a nice sandy place to camp.

The next day we got an early start since it was going to be a long day. We continued down the trail and saw a beautiful sunrise that lit up the orange and red landscape. 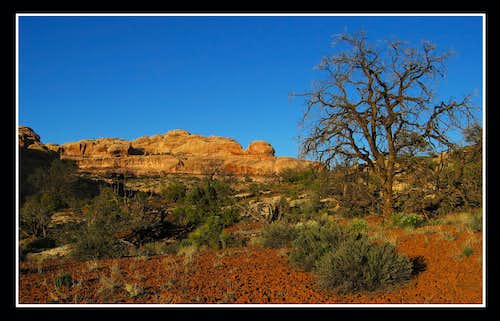 We got to the point where the trail intersected Sand Tank Canyon. We took a break here and started a short day hike up the canyon. The sand here was very deep and just walking was hard. Once we got to a nice view of the fins, we relaxed and ate some lunch.

After returning to our packs we continued towards the Dolls House and looked back every now and again to watch our progress and take in the views. We were slowly gaining elevation which allowed for more views to develop.

View back towards the Fins

When we finally reached the Dolls House we saw people for the first time. A mountain biking party was riding the roads through the Maze and stopped at the Dolls House to take their midday break. I told my friends we had to take a short side hike to see the Spanish Bottoms and the Colorado River. Plus I wanted to see how much vegetation had grown back since I was last there in March of 2009. Since then I had found out the cause of the fire and when it occurred which was about November of 2008. To my surprise, there had been much recovery. 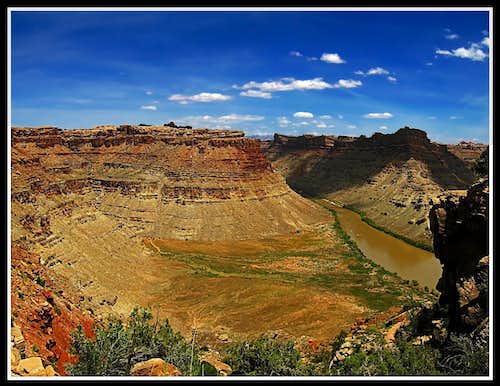 View down into Spanish Bottoms 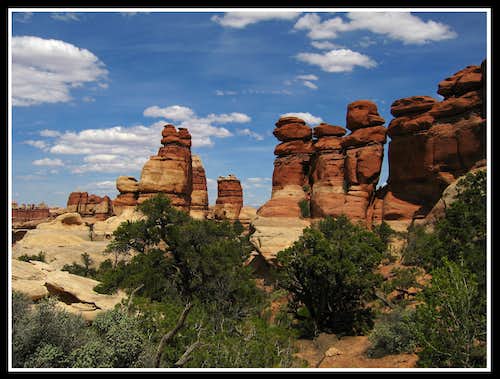 You couldn't actually see the confluence from here. It is much better seen from the Needles District side but the view was spectacular anyway even with the clouds. 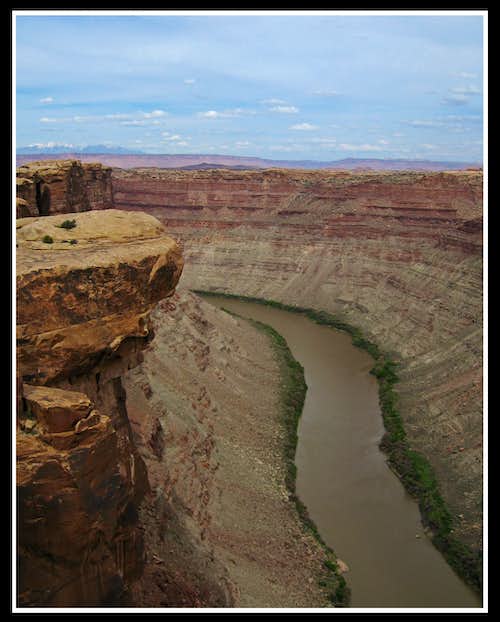 By now we were down to one more liter of water for the three of us which meant we had to get to Water Canyon to camp the night. We continued down the Water and Shot canyon route. We started descending into Water Canyon and after some hesitation, we found the flowing water in Water Canyon. We found a nice place to camp next to the water. The sun had also started to peek back out for a nice sunset. At sunrise the next morning I got a nice photo from Water Canyon. Since the sun was out, I had hoped we would have a nice day. 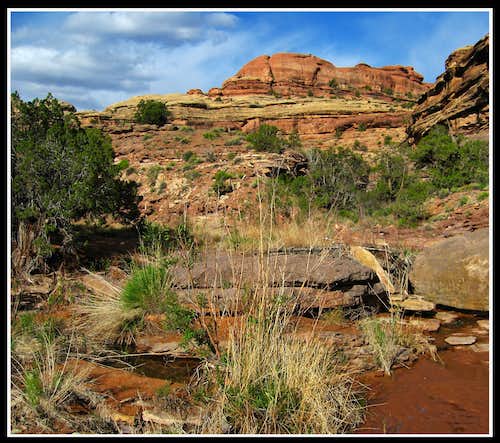 We started ascending to the pass on the ridge between Water and Shot Canyons. Clouds had built up again and it was drizzling but we had high hopes because to the west was brighter skies.

We descended into Shot canyon and found ourselves trying to find the correct route. Apparently we took the wrong side canyon and had to backtrack to find the route again. This actually helped us out because by the time we ascended back onto the higher ground near Chimney Rock, the sun came out and views opened in all directions with sunlight. 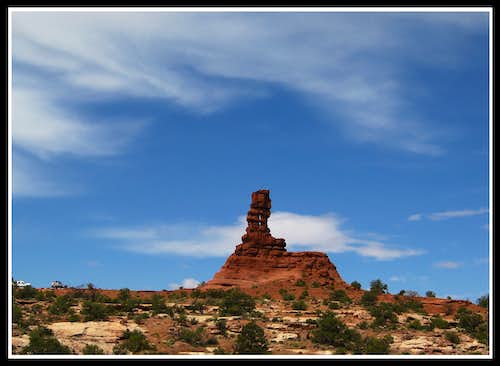 Part 3 - Chimney Rock to the Maze Overlook and out

We took a nice rest at Chimney Rock and noticed two trucks parked there. No one around though. The views towards the Chocolate Drops were great.

Since the last time I was here I had done much of the Pete's Mesa route in the dark by moonlight, I was happy to do it during the day when the sun was out. From here we simply retraced our steps from the last time I was here. We wanted to climb Pete's Mesa but clouds were building again and the wind was picking up. So we descended back down into the canyon and made our way back to the natural spring just below the Maze Overlook.

View of the Chocolate Drops from down in the canyon

This area was very pretty as it was all green from the spring water. Just as we started making our way to see the Harvest Scene it started getting very windy and drizzling. this was a nice break from the head we had earlier. The Harvest Scene pictographs really are worth seeing as they are over five feet long. We ascended to the Maze Overlook and really enjoyed the nice scrambling and Moqui steps. Right as we got to the top the sun came back out and I was once again taken away from the beauty of the whole place. Shot two great panoramas from the Maze Overlook.

Panoramic View from the Maze Overlook

Panoramic View from the Maze Overlook

We stayed here for about an hour enjoying the views and looking at the ground we covered. We simply decided to take the road all the way back to the top of the Flint Switchbacks from there. Just after we passed Horse canyon we found a nice place to pitch the tents and camp. The sunset that evening was spectacular. 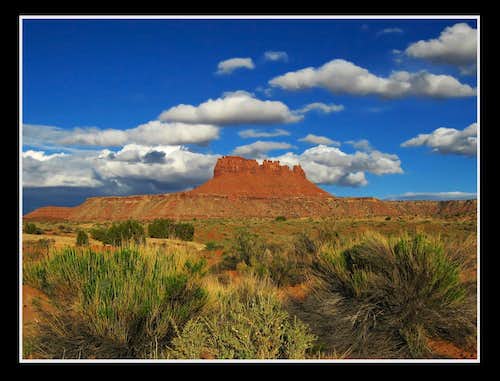 Overall this was an awesome backpack. Although long, it was very enjoyable. We covered about 45 miles in 3.5 days. I will definently return again sometime to get to places I haven't seen yet like the summit of Pete's Mesa, Jasper Ridge and the old Powell Route as well as actually hiking the ridge to get to the base of the Chocolate Drops.

Nice report. I was amazed on my first visit to the Maze and sure can't wait to go back. Your photos just fueled my fire to return. Thanks!

Such an alien but amazing place. I love Canyonlands! Keep up the surreal pix