Huts on the route to Piz Bernina

The Refuge Marco e Rosa 3609 m is an alpine hut located on the Italian side of the Bernina group on the "Forcola di Cresta Guzza". It is a newly re-built refuge, a popular destination for mountaineers and the starting point to climb Piz Bernina 4049 m from the Italian side along its Normal route. Piz Bernina is located on the border ridge between Italy and Switzerland and is one of the few "isolated Alpine four-thousanders".

The refuge is located in a magnificent position at the Southern end of Spalla (Shoulder) of Piz Bernina. Actually you can find two structures there. The first structure at 3597 m is really the old hut. It was constructed in 1913 and nowaday it's used for emergency and winter shelter. In the summer 2003 it was built the new Refuge Marco e Rosa few meters above (on 3609 m).

The first refuge was built in 1913 on the initiative and financing of Marco De Marchi and Rosa Curioni with the contribution of the alpinist Alfredo Corti, personal friend of Marco and Rosa, and was named in honour of De Marchi spouses. In 1964 the Italian Alpine Club of Valtellina built a larger hut. The current hut was inaugurated in 2003, while the 1964 shelter has assumed a function of a winter shelter. 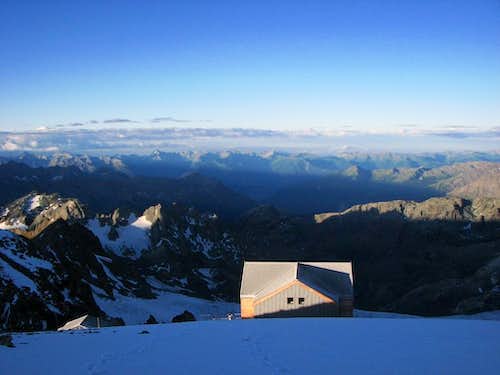 The refuge is a mountaineering destination that can be reached both on the Italian side and on the Swiss side of the Bernina Massif.

Italian side
From Campo Moro
Time: 7 hours  Difference in level: 1700 m
Difficulty: PD
Swiss side
From the Chamanna Diavolezza (ch)
Time: 5 hours  Difference in level: 1500m
If you want to approach Piz Bernina from the Italian side you can reach the next refuges:
Rifugio Zoia at Campo Moro 1990 m, Rifugio Carate - Brianza 2636 m, Rifugio Marinelli-Bombardieri 2813 m and Rifugio Marco e Rosa 3609 m.

You can reach Marco e Rosa from Rifugio Marinelli-Bombardieri in 3-4 hours on an itinerary with PD difficulty. There are two ways to do it. There are winter route and a summer route. The two routes have a common way first I write down the details of it: There is a well marked route from Rifugio Marinelli-Bombardieri on the rocky lower part of Scerscen Glacier after one hour you can reach the icy and snowy part. The next part of the route goes along a flat glacier surface to the north under the eastern slopes of Pizzo Argent and the large southern side of the ridge of Cresta Guzza.
Follow this direction and you'll reach the entrance to the gully on the ridge of Guzza near its northern edge, about 30 m from the terminal crevasse, you'll find the protected route that takes you to the mountain hut. This route contains metal steps in the more difficult points. There is a metal ladder at the base of the terminal crevasse to help you get over it.
In winter or in deep snow you can ignore the rocky via ferrata and you can choose a steep gully full of snow. The only problem here is to get over the terminal crevasse. Just climb up to the pass and you can easily walk up to the hut on the ridge.

If you want to approach Piz Bernina from the Swiss side you can reach the Chamanna Diavolezza 2978 m Phone:+41 81 839 39 00 Mail: berghaus@diavolezza.ch

This is the map of the Val Malenco region. (Sondrio - Franscia) 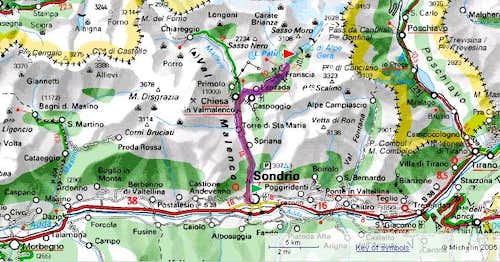