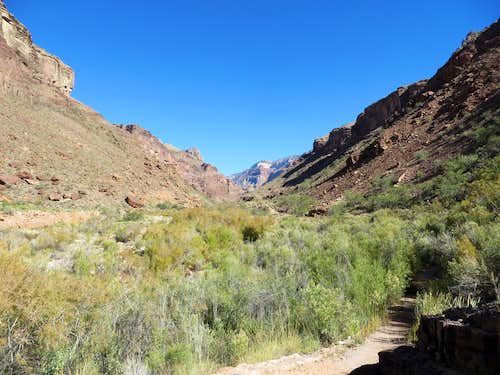 North Kaibab trail between the Box and Ribbon Falls
A Rim to Rim to Rim is a continuous event, only taking breaks for food, water and necessities. This endurance run ranges from 42 miles to 45 miles to 48 miles (official distances not including the inevitable side steps, detours and by-passes that add at least a mile to the distance), depending on the routes taken. As the name indicates, a RRR starts on one of the Grand Canyon rims, goes to the other, and comes back to the initial rim.
I hear people who claim of doing these hikes over a period of 3 to 4 days (and strongly recommending to others to follow suit, in order to "take in the beauty of the canyon.") I do not want to burst anyone’s bubble, but doing a Rim to Rim to Rim in multiple days is a mere camping trip and nothing else. Trying to take credit for completing a Rim to Rim to Rim in 2-3-4 days, while camping in the various camping sites along the trail, is like one would say he ran a marathon in 3 days, running 9 miles each day. That claim would be the ridicule of everybody, anywhere. Nobody that trail runs/ hikes a RRR does it for the beauty of the canyon but rather for accomplishing a grueling run/ hike in the shortest time of one's ability. A RRR tests the limits of the body, mind and spirit of most runners/ hikers.
There are claims by people who ran and completed a RRR in less than 10 hours and I read of hikers that finished the grueling undertaking in 36 hours. All of them did this as a non-stop "day hike" endeavor. There are voices that ask for a not-to-exceed 24 hours time limit for a RRR to be considered as such. As far as I am concerned, to everyone that completed a RRR as a "day hike", whatever it took to finish, congratulations. To everyone else that hiked a RRR by pitching a tent, you tell yourself what you want, but you did not do a RRR. You just went camping in the Grand Canyon.
There are hikers that like to call the RRR effort "the death march." As difficult as this trek might be, I don't like that terminology. Nobody goes on a RRR to kill themselves and most of the people that attempt the double crossing of the Grand Canyon are prepared and know what to expect. No many people who finish a RRR would be immediately ready for a soccer game, for sure. Being tired after running/ hiking almost 50 miles in high temperature, dry air and baking Sun, is no easy task. However, being very tired and having ugly looking blisters hardly qualifies for a near death experience.
The question is: how many RRR a person has to do to be memorable? The answer is: one. Do this trek more than once, and it becomes a statistic.

There are three trailheads to start a RRR. All these three trailheads are inside the Grand Canyon National Park. Two of the trealheads are on the South Rim and one on the North Rim. Grand Canyon is in the northwest corner of Arizona, close to the borders of Utah and Nevada. Grand Canyon National Park lies entirely within the state of Arizona.
Bright Angel Trail Head is located just left (West) of Bright Angel Lodge. Driving into the National Park follow signs for the "Village." The trail starts by mule corral. There is parking right next to the trail head.
South Kaibab Trail Head is located at Yaki Point, inside the Grand Canyon National Park. Yaki Point is the only viewpoint on Desert View Drive that is not accessible with a private vehicle. It can be reached using the free Shuttle Bus (Orange) departing from the Grand Canyon Visitor Center across the street from Mather Point on South Rim. Busses run from just before sunrise to just after sunset. The schedule changes slightly according to season, so check departing times on the Grand Canyon Visitor Center website (see below.) There is no private parking at this trailhead. Parking is permitted along the Desert View Drive, near the gate at Yaki point. However, there is a 1/2 mile (one way) walk to the trail head.

North Kaibab Trail Head is located 41 miles south of Jacob Lake on Highway 67 (1.5 miles north of North Rim Grand Canyon Lodge). Transportation is also available from the Grand Canyon Lodge (twice each morning; check at the lodge for times and fares) or, for those staying at North Rim Campground, it is a half-mile walk to the trailhead. Hikers on a rim-to-rim hike and who have only one vehicle often use the private Trans-Canyon Shuttle, which provides service between the North Rim (departs at 7 AM and 2 PM) and the South Rim (departs around 1 p.m.) daily from May 15 to October 31. North Rim park facilities (lodge, store, gas station) close on October 15, but Highway 67 remains open to vehicle traffic until winter conditions preclude access. Visitors should be prepared for road closure anytime after October 15, but often Highway 67 remains open into November. Once closed Highway 67 remains so until May 15. It is not possible to reach the trailhead by vehicle before May 15.

I noticed that psychologically it makes a big difference breaking down the entire distance in shorter segments. It is easier to think of getting to the next milestone that could be 1, 2 3 4 5 miles away rather than to keep thinking the entire day of the whole 42 to 48 miles. For convenience, here is a list of a breakdown of distance.
South Kaibab trailhead to Colorado River/ Bright Angel Campground/ Phantom Ranch - 7 miles

A very important aspect of a RRR endeavor is water. Not needing to carry all necessary water for a RRR is a very important aspect. There is drinking tap water on all three main trails in the Grand Canyon. However, depending on the time of the year, some water stations are closed for the winter (usually from late October to May 15.) The water pipe is old and breaks many times during the year, therefore causing unpredictable water closures. I strongly suggest that before starting to hike down the trail, to visit the Backcountry Information Center and check any last minute water main closures. If the office is closed, they would have a note on the door listing the issues. (See link below for critical backcountry information/ water station availability.)
There is plenty of water in the canyon, from various creeks or springs. It is strongly recommended to treat the water. Nevertheless, during the monsoon season July to September, the water in the canyon is muddy and undrinkable unless filtered and treated.

Below is a list of the water stations along these trails and the distances between them (water available only from Mid May to late October:) (See NPS link below for water stations and the facilitiesw associated with them.) 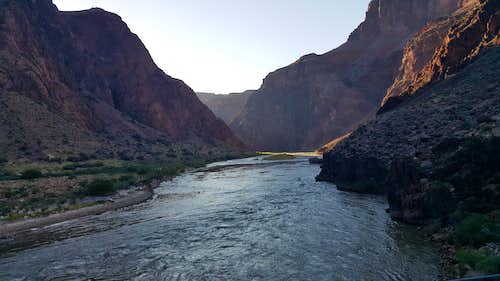 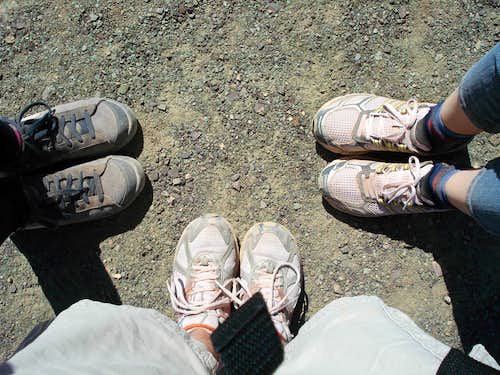 The right shoes are very important.
A good pair of trail running shoes. Flashlight with an extra set of batteries. Hiking boots or hiking shoes are not really necessary, unless the RRR is done during the winter months. Sun glasses, hat, sunscreen, a watch with night light, trekking poles can be used if only hiking, band-aides, iodine pills for treating creek water. Taping the feet should be strongly considered. One can carry a cellphone, but the cell reception only goes 3 miles down the trail from the South Rim. There is no reception anywhere after that, including at the North Rim North Kaibab Trail Head.

$30 a car fee for entering the National Park. 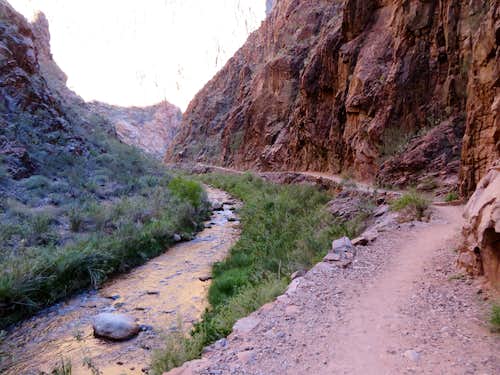 North Kaibab Trail
Doing a RRR is a mater of personal choice, just like running a marathon. A RRR is not a race for who is the fastest but rather a personal search, the opportunity to proving oneself his/hers undiscovered strengths, mental and physical resources. RRR is first about learning a lesson about oneself. Finishing the grueling trek is a result of this quest and not an option. Finishing the trek under a self-demanded time is the only visible prize one will get. Each RRR experience is different and also unique to each runner/hiker. 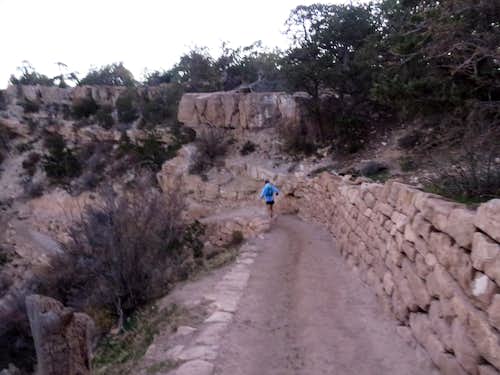 Rim Rim Rim
There are lots of websites that list various people and their record times. As far as I know, the fastest alleged record is of almost 7 hours for the shortest distance - 42 miles. I have a very hard time believing that someone can actually run at an average of 6 mph on those trails, given the sharp switchbacks, rocky and uneven surface and steepness of the last 5 miles to each rim, in addition to getting and drinking water and eating the energy gels. Being that as it may, congratulations are in order to anyone that manages to complete this trek without pitching a tent, regardless of the time.
A RRR is an arduous undertaking. Months of prior training, both cardio and strength are a must. Shorter hikes on these trails should be completed prior to attempting a RRR. As well, going down from the rim to river and back to rim, although a day-long tough hike, would give one a taste of hiking in this environment. No marathon runner should attempt a RRR only based on the marathon experience. A RRR is a totally different kind of running/ jogging/ hiking. Shorter hikes (10-15 miles) on these trails will give one priceless info about the particularities of hiking in the Grand Canyon.
A good plan to follow, after a few months of training, would be to first hike a rim to river to rim, then a rim to rim and only after having these experiences, a RRR could be attempted. After finishing a rim to rim one should evaluate how it feels and think of what it would take to turn around and continue for another 23 miles. I am sure that not many folks would determin that they have the necessary resources to go back to where they started. There are many things that can go wrong on these trails, from having a bad day, dehydration, heat exhaustion, sprain ankle or broken leg. All these can happen to anyone. But if one lacks physical training, all bets are off. Being able to run at 9 mph for an hour, three times a week will hardly train one for a 50 mile desert trek.
Be prepared and hike smart. There is no satisfaction in dying doing what you like. The success lays with being able to tell the story. 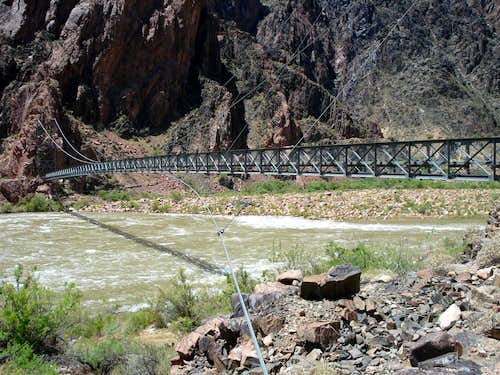