Just about every outdoors-oriented person in the Washington, D.C. area has heard about, and probably been on, the Billy Goat Trail, a popular hiking and scrambling route on the Maryland side of the Great Falls area.

But what about the Virginia side, where the cliffs are taller and steeper? Is there anything like that there?

Yes, there is a trail along the clifftops; it is the River Trail. No, it is not a scrambling trail like the Billy Goat Trail; it is a hiking trail used by everyone from casual sightseers in their church clothes to accomplished rock climbers.

Sort of-- When conditions are right, you can find your own little scrambling adventure. There is no marked route, but that adds to the fun. And it is more challenging, and vastly less crowded, than the Billy Goat Trail. It is also just as scenic, arguably much more so.

Riverside Scramble 1 is the shorter and easier of the two riverside routes I have detailed for Great Falls Park. It is mostly rock-hopping along a boulderfield beside the Potomac River in Mather Gorge, and difficulties do not have to exceed Class 3. Riverside Scramble 2, on the other hand, often follows the base of sheer cliffs in the narrowest section of Mather Gorge; it is rougher and has a wilder feel, even though it's not in a true wilderness setting, and scramblers there will almost certainly have to negotiate some Class 4 terrain, perhaps even some 5.0-5.2 depending on conditions and exact route choices.

Because the two routes differ in character, and because they are separated by an impassable cliff rising straight up from deep water, there is a separate page for each. 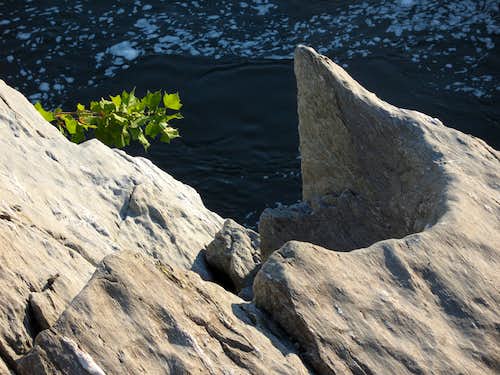 From the western part of I-495, a piece of the Capital Beltway, take Exit 44 for Route 193, Georgetown Pike; this is the second exit south of the Maryland border. Drive west for a few miles until you see the well-signed road leading to Great Falls Park. Turn right and follow the road about a mile to the entrance station. After passing the entrance station, make an immediate right and drive down to a parking area. This is the area used by most climbers and kayakers.

The scramble runs from Gorky Park to Dihedrals, passing five other named crags along the way. The total length along the river is only about half a mile, but the rock-hopping and the scrambling will slow you down (once you reach the rocks, the going is almost always Class 2+ or 3); total distance with the approach, scramble, and return hike is maybe about 1.25 miles. Elevation gain from the river back up to the trails is only about fifty feet, but the up-and-down nature of the route makes the real elevation gain more like 200-300', perhaps more. This route is for fun, not for conditioning or physical challenge.

This route is best when water levels are low. When levels are normal or slightly above, you will often have to leave the riverside and make a higher traverse. During flood conditions, most or all of the route is nonexistent. 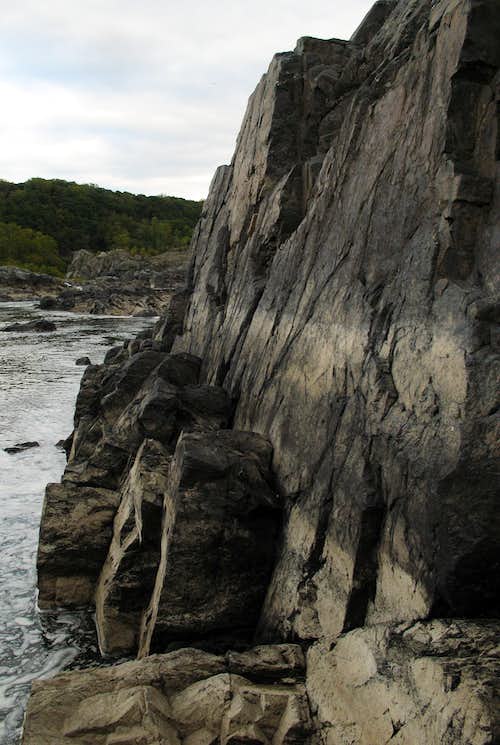 Gorky Park traverse
From the parking lot, hike east toward the river. To your left, in the direction of the visitor center, there is an overlook accessed by a boardwalk, steps, and a ramp. Just a few yards before (downstream from) the overlook, on the other side of a fence, a dirt-and-sand path leads through an obvious break in the trees for about 0.1 miles (at most), to a sandy area atop some cliffs. This is the top of Gorky Park. A few yards to the left, a gully leads down through a large, obvious break in the cliffs. My guidebook calls this route Class 4, but it's really Class 3, especially if you stay to the left as you descend. At the upstream end of the crag, there is a walk-down route that accesses some of the scrambling opportunities and unnamed routes on the crag, but high water levels will most likely bar access to the named routes via this descent. If, however, water levels are low enough, this is a nice way to start the traverse, for you will begin with an interesting scramble across some narrow ledges and outcrops just inches above the river. 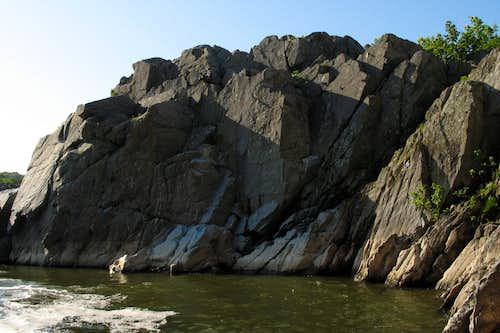 Flat Iron
To get the most out of the setting, stay as close to the river as possible. As you near Microdome, water levels may force you to go up and over it and its neighboring rocks, but you should be able to return to the river level rather quickly after crossing the top of Microdome. The rambling will next take you past Fish Face, and then you will be confronted with the great block of slippery schist known as Flat Iron. 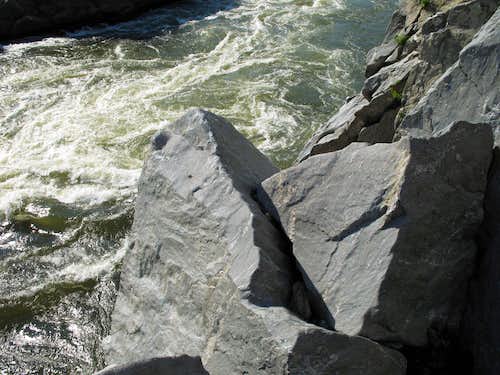 There is no traversing around the base of Flat Iron; the cliffs rise sheer from a deep, swift section of the Potomac River. In fact, this is one of the most dangerous areas of Mather Gorge, as a fall into the river will almost certainly result in a drowning death (the river is not only deep and swift but is also known for its treacherous currents, some of which have been known to pin victims to the bottom). It is Class 3 scrambling to get atop Flat Iron, where the views are impressive and even a little vertigo-inducing despite the fact that the top of the crag is only about 40 feet above the river. Note-- the Flat Iron page details an unnamed low Class 5 route that more adventurous and experienced scramblers may wish to try as an alternative to the Class 3 scrambling. 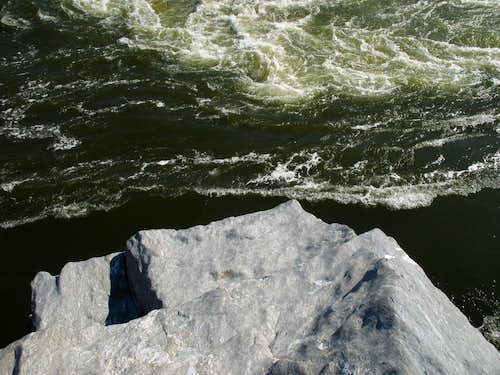 From the top of Flat Iron, carefully descend back to the river level. I emphasize carefully because although it's mostly Class 2 hiking down the crag, the rock is extremely smooth and slippery in many places; I once lost my footing while just hiking here and fell about 15 feet, and I thank luck or God or whatever that I wasn't directly above the river when I fell. Some more scrambling and traversing will get you to the shell-covered area at the base of the Sandbox (this is a great crag for beginners and people interested in routes on the easier side of moderate), and some more scrambling (here it gets into some harder Class 3 and even what some might argue is Class 4) gets you to the Cigar Box area. 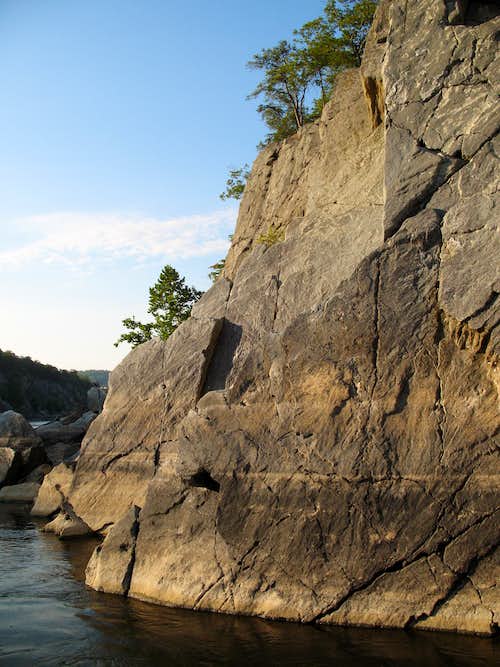 Dihedrals-- end of the line
After Cigar Box, the route ends very soon. Some hiking and scrambling take you to the sheer upstream-facing wall of the Dihedrals crag. The water along the cliffs is deep and drops off right away, and I have never seen the river low enough to permit wading through here. Therefore, since swimming in the river here is both illegal and dangerous, one must scramble up to the gorge rim. Once there, follow the River Trail right (upstream) to return to the parking area, or scramble back down a little further downstream to reach the base of the Dihedrals crag and the start of Riverside Scramble 2.

Because of all the clambering and scrambling on rock, I recommend hiking boots with good ankle support. Chacos, with their good soles, work well, too. I do not recommend wearing sneakers; I have found that sneakers do not provide good traction on the slippery rock out here.