Riverside Scramble 2-- Dihedrals and Beyond

Riverside Scramble 2 is longer, more challenging, and more scenic than Riverside Scramble 1, and both are in Great Falls Park in Virginia. Directly across the Potomac River from these routes is the extremely popular Billy Goat Trail, a fun and scenic hiking and scrambling route on the Maryland side of the Great Falls area. But if you're looking for a different perspective of spectacular Mather Gorge (these routes, in addition to being on the other side of the gorge, run along the river's edge whereas the best sections of the Billy Goat Trail mostly stick to the rim), an escape from the crowds, or, for Virginians, an escape from the traffic (D.C.-area residents are all too familiar with the frequently nightmarish traffic on the Capital Beltway), this route will please you. Also, this route has more scrambling than the Billy Goat Trail does, and the scrambling is more challenging.

When conditions are just right, and they usually only are so when water levels are low, one can traverse the river's edge from the Dihedrals crag all the way to the upstream area of the Downstream Climbs crags. Shorter jaunts are possible, and they can be kept at Class 3, but the full route begins (or ends) with a 5.1 pitch and ends (or begins) with a 5.0 one, with several sections of Class 3 and some occasional Class 4 along the way between them.

Please note: The pictures on this page are presented to show in order the scenery and conditions along this route, first by horizontal format and then by vertical, and they do not match the text descriptions immediately above, beneath, or adjacent to them (the first in the sequence is actually this page's primary image). There are, however, photos of several features mentioned in the route description, and the captions provide useful information (I hope).

From the western part of I-495, a piece of the Capital Beltway, take Exit 44 for Route 193, Georgetown Pike; this is the second exit south of the Maryland border. Drive west for a few miles until you see the well-signed road leading to Great Falls Park. Turn right and follow the road about a mile to the entrance station. There are two large parking lots after the entrance station.

Just past the entrance station, though, an unmarked road turns sharply right and leads to the parking area for climbers, where there is a registration box. From there, hike east to a bridge crossing the Patowmack Canal, cross the bridge, turn left, and then quickly turn right onto the River Trail. It is maybe a tenth of a mile to this point.

Quick Overview-- length about 2.5 miles RT (0.5 to the river, 1.25 along the river, and 0.7 back to the parking area). There is a descent of about 50' to reach the river and a climb of about 50' to get back up, but the up-and-down scrambling makes the real elevation gain at least two or three times that. This route is for fun, not for conditioning or aerobic challenge. 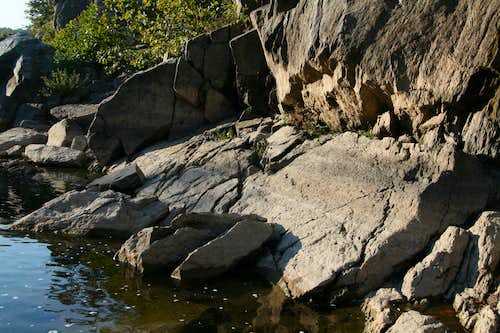 Boat Ramp-- Canal Cut crags
This route is best when water levels are low. When levels are normal or slightly above, you will often have to scramble back up to the gorge rim and hike downstream until you find a way back down to the river. During flood conditions, the route is impassable; actually, it will be several feet underwater. 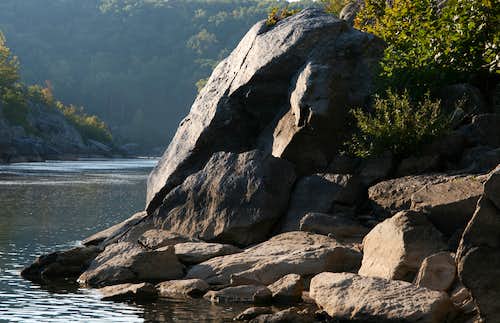 The route starts at the base of the Dihedrals crag. About 0.2 miles along the River Trail, on the left, there is an outcrop overlooking the river. This overlook is shortly after the Sandbox climbing area. On one of the rocks, there is an easy-to-spot informational plaque about Stephen Mather. This outcrop is the top of the Dihedrals area. From the plaque, you can look straight down on the Layback Dihedral route (5.4).

To access the base of the crag, there are two choices. The first and easier way is to walk about 10 yards downstream from the plaque and look for a Class 3 way down to the river. But to make your trip more challenging and slightly longer, consider the 5.1 Beginner's Chimney route instead. It follows a large crack and gully system that starts about 20 yards upstream from the Mather plaque. 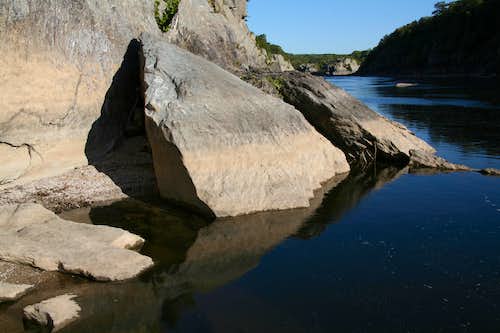 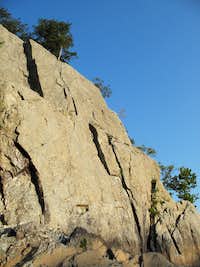 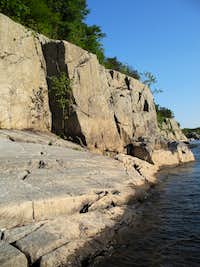 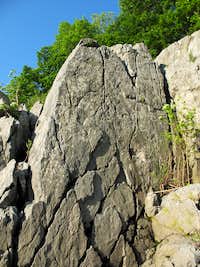 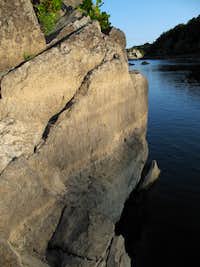 8-- 45-Degree Downclimb
Now start following the river downstream. You'll soon reach the Dike Creek Crags area, which is known for some short toprope routes and numerous bouldering opportunities. When the river is low, a sandy beach appears here and makes for easy going; when that beach isn't there, however, there's probably no getting through here.
After the Dike Creek Crags area, you reach Juliet's Balcony. This popular toproping crag has a distinguishing feature-- a mid-level shelf referred to as the "balcony." The lower section of the crag rises straight from the river, but our scrambling route continues via some Class 3 or 4 climbing up to the balcony, followed by a Class 4 downclimb back to the river from the balcony's downstream end.

Next up is one of the most scenic sections of this route. A little hiking and scrambling lead to the start of an area graced by four contiguous crags: Seclusion, Romeo's Ladder, Little Aid Box, and Aid Box. Seclusion, the first of the crags, is the highest and the closest to the river, and your traverse along here will have you inches from the river while directly beneath some of the best and most popular routes at Great Falls. Aid Box, last of the crags and set back just a bit from the river, is one of the most spectacular, and hardest to climb, crags in the park. A prominent formation called the Nose draws eyes, cameras, and climbers, and it is interesting from several different positions.

After Aid Box is a short stretch of Class 3 and 4 scrambling along a little-visited stretch of the gorge, taking you to the Canal Cut Crags. At this spot, the cut of the old Pawtomack Canal meets the river. The upstream side is called the Grimsome area, and the downstream side is called the Boat Ramp area. Unless river levels are unbelievably low, and I have never seen them low enough for a direct traverse, not even after a period of almost six months with just trace amounts of rainfall, you will have to engage in some Class 4-5.2 climbing through Grimsome to get to the actual canal cut and beyond.

Expect some Class 4 moves in order to pass from the Canal Cut area to the Bird's Nest crags, home to some of the longest routes at Great Falls and some of its most spectacular cliffs. Then it's some more hiking and scrambling through a riverside hinterland until you reach, via some more Class 4 or easier Class 5 moves, the Cornice area. Cornice is a small crag by Great Falls standards and only has a handful of established routes, but it is known for some of the best moderate routes in Mather Gorge.

Now things can get interesting.

Beyond Cornice, the scrambling leads to the upstream end of the Dr. Needlepoint crag, another highly scenic section of the gorge and the site of many excellent climbing routes. When river levels are very low, such as they are several months into a drought, you can keep hiking and scrambling (Class 3 and 4) along the river's edge until you reach cliffs rising straight from the downstream end of the Degree 101 crag; those cliffs are probably where the riverside portion of the route will end for most people and where they will turn around and head back up Poison Ivy Gully (Class 3, approximately in the middle of Degree 101) to reach the River Trail and return to the car.

However, not all droughts are the same, and not all begin under the same conditions. One year, I was able to make the entire traverse across the base of Dr. Needlepoint near the end of a long drought, but the next year, again well into a drought, I could not. If the river does meet the short but still sheer cliffs and blocks further progress, it will be at the upstream end of the Needlepoint area, and some Class 3 scrambling will get one up the cliffs and outcrops to the trail above.

From up top, you can call it a day (or a morning or afternoon-- this isn't a long route), knowing there's not much left to the route, anyway, or you can be stubborn and head back down to get every little bit from the route that you can.

If you choose the second option, then your best bet is to take Needlepoint Descent back down to the river. This is a 5.0 route rock climbers sometimes use to access the base of the crag. Anyone used to scrambling should find it pretty easy to ascend, but it can be a little tricky the other way. The first move (descending) is by far the hardest one and is the only technical one, and it may prove too awkward or unnerving for scramblers accustomed to Class 3. The move is not a long one (a drop of about 7 or 8 feet to a shelf), but it almost has to be done facing in without really being able to see where to place your feet (check it out well from above first), and a fall could result in a fall off the shelf, which could be seriously injurious or even fatal.

Whether the river is low enough for a full base traverse along Dr. Needlepoint or you have to scramble up and then back down to bypass the encroaching water, the route seemingly comes to an abrupt end (see the photo captioned "7: Into the river or up") about 20 yards beyond Poison Ivy Gully.

But if you still want a little more and you're willing to get a little wet, you can push on. By staying next to the sheer wall, you can walk over submerged rocks for around 20 yards to reach the upper end of a cliff system with a number of routes the local guidebook simply calls Downstream Climbs. Warning: Do not attempt this part of the route if you cannot see the rocks; when they are visible, the water will be as much as waist-deep.

Shortly after reaching dry land again, the route does come to a certain end, as the sheer cliffs rise from deep water that drops off straight from the rock. To reach the trail above, climb Donovan, (5.2-- a steep gully and wall in a small inset area, see this photo) or 45-Degree Downclimb (5.0, easy cracks and ledges, a short distance downstream from Donovan, see the photo to the right).