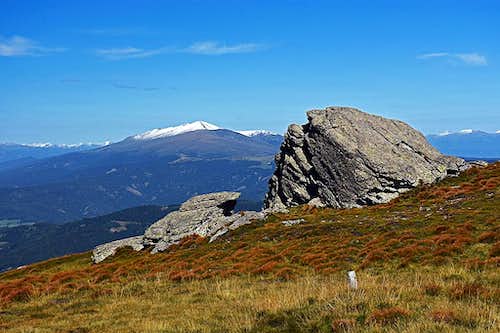 By the main ridge towards the north

The characteristics of Lavanttal Alps are more or less everywhere the same. Huge ridge massifs are reaching quite high altitudes (over 2000 m), their summit parts are grassy, dotted with picturesque rock formations, their lower parts are covered with beautiful forrests and meadows, with hundreds of farms, reaching in some cases quite high altitudes. The massif of Sau Alps is the same. For a soul which is not seeking only sheer rocks landscape, the massif offers a lot of possibilities to explore. Hiking trips, biking trips, skiing, horse riding, just car driving or any other outdoor activity can capture you for several visits.

In this group I will for now not create any mountain page. All the main mountains are just humble, rounded elevations in the main ridge. But will bring a few ideas how to explore the group.

The massif is clearly delimited from the other Lavanttal Alps. On the north, the Klippitztoerl road pass is delimiting it from the group of Seetal Alps (Seetaler Alpen). On the south, the Sau Alps are lowering with many side ridges down to the Drau / Drava valley. On the east, the border is the valley of Lavant. And on the west, the Gurk river makes a clear border. The N-S distance (Klippitztörl - Völkermarkt / Velikovec) is some 35 km, the E-W distance (Wolfsberg - Gurk) is some 28 km. As seen on the map right, the main ridge is running in the N-S direction. The main summits and crossing route is drawn in red. The forrested southern part can be hiked in all directions, but distances are quite considerable.

For mountain hiking, some 15 km of the northern part are interesting - from the Klippitztörl to the summit of Kleiner Sauofen. Due to easy terrain, the massif is of course criss-crossed with marked paths in all sections. You can walk (or bike) for days, from one valley to the other, or by the slopes, adapting itinerary accordingly. It makes no sense to mention all possibilities or draw the marked paths on a map sketch. But the summits, reaching above the timberline are worth to be named. In the south-north direction they are:

In a touristic sense there are many nice places to visit. Almost all towns around the group are having something to show. Many of them were in the Middle Ages quarded by strong castles, like the ones above Wolfsberg, Griffen, Hochosterwitz and others. On the lower slopes of the massif there are beautifully lying villages. Let me mention only the Diex and Preims. And, on the southern, eastern and western slopes you will see many picturesque and panoramic farms. Some of them offer also rooms and food.

The Sau Alps are already on the very eastern part of the Central Eastern Alps. On one hand, the main and most picturesque groups of Alps are already remote, but on the other hand the views are open all around. In a clear day you'll be able to enjoy a really immense panorama. If you come early in the morning, also the Southern alps will not be seen in the noon dusk. So, towards the south, first the long range of Karawanks can be seen. All the main summits are clearly visible, the highest part of the group is towards the SW. More towards the SE there is the big massif of Pohorje. Behind the Karawanks you will see the highest, very rugged summits of Kamnik and Savinja Alps. More towards the SW, behind the Karawanks you will see the wonderful Julian Alps. The Triglav is looming high and all the main giants towards the Montaž on the very west can be seen. Towards the west there are the lower, rounded summits of Gurktal Alps and Nockberge, with the hilly landscape of Kärnten below. But behind all this the glaciated giants of Hohe Tauern can be clearly seen. Towards the north, the closest is the high summit of Zirbitzkogel, the highest of the Seetal Alps. Behind it, the whole horizon is packed with the summits of Niedere Tauern. We were lucky to see them in summer already covered with snow! Further towards the NE and E there are the remaining groups of Lavanttal Alps - The Pack Alps and the Kor Alps.

If you are coming with a car, you can drive quite high on the Sau Alps. The roads, reaching touristic huts, should be chosen. But some roads are closed for public traffic and some roads higher on turn into hardly passable dirt-roads. The towns and villages around the massif are quite remote from main summits, so only rarely anyone hikes up the whole distance. Here are just a few options for a start:

It all depends on your taste, but there's one thing which really deserves to be recommended: crossing all the highest summits in the main ridge, or at least the ones in the northern part. These two logistic advices can be useful: 1. Leave your bikes on the Klippitztörl, drive down in Wolfsberg and take the 8:00 bus (only Monday) to Ofnerhütte. Then ascend the main ridge and cross it all the way to Klippitztörl. Finally return to Wolfsberg, biking over the Preims hamlet. You'll never forget that day! 2. Park in Wolfsberg and take the bus to Klippitztörl, say on Monday at 8:00. Start crossing the main ridge there. After the Ladinger Spitz descend to the Ofner hut and from there return to Wolfsberg with the bus at 17:00 (only Monday). To cross the whole northern part of the main ridge you need some 4-5 hours. If you start and end the hike in the same place, you'll probably shorten the list of visited summits.

The same logic holds in winter conditions. But then the busses to mountain huts are not driving, the only bus is probably going on the Klippitztörl. Crossing the whole ridge on skis must be wonderful, especially if you have enough snow to ski down to, let's say, Wolfsberg. The town lies 1600 m below the Ladinger Spitz!

In the whole massif there are no limitations, besides driving by the roads, closed for public traffic.

The highest summits of the Sau Alps can be ascended any time of a year. In winter conditions have in mind that tours will be very long.