Scout Falls Couloir is a superb spring/winter alternative to the popular Timpooneke Trail route to the summit of Mt. Timpanogos. My first experience with the Timpooneke Trail was 10 years ago on a blistering-hot August day. The trip was successful, but so dusty and hot that I have never wanted to return over the last 10 years.

This spring (well it was June 10th to be honest, but it was spring-like with thick snow and large cornices everywhere) I climbed this route with a small group as a training opportunity for some large summer climbs, and I have to say that the cool temps, soft green grass, bursting waterfalls, and stark alpine environment up high, renewed my excitement for this area of Timpanogos. During the spring time, this route is awesome! Not only that, we were completely alone on the mountain. Another wonderful feat that is nearly impossible during the mid-to-late summer.

Those familiar with the Timpooneke Trail will note that the terrain of this route is fairly similar to the summer trail. I feel this route is worth listing because rather than meandering through the cliffs of Scout Falls, and the Grand Staircase, this couloir is a direct line up middle that provides exciting terrain and a much shorter distance (not to mention a superb glissade back down). Scout Falls Couloir is a great alternative to a classic trail up Mt. Timpanogos.
Click for the Full Trip Report on my photography website.

When traveling in snow conditions (especially winter/spring), only attempt this route with skilled awareness and understanding of avalanches and snow conditions. This route is a major avalanche zone and would be unsurvivable in the event of an avalanche. 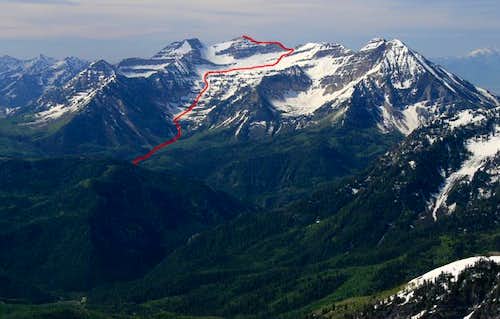 Take I-15 to the Highland/Alpine Exit (#287), turn east onto UT-92. Continue east on this highway and you will arrive at the mouth of American Fork Canyon. There is a Forest Service Toll Booth and a $3.00 fee for a three-day pass on the road.

From the mouth of American Fork Canyon, go 8.4 miles along the Alpine Loop road and turn right to the Timpooneke Campground. Go a short distance past the campground host trailer to a parking lot on the left and the Timpooneke Trailhead.

The Timpooneke Trailhead is well marked, and this is where you start. Take the trail roughly 1 mile to the base of Scout Falls. This area is a moderate range of cliffs with multiple waterfalls cascading down. If you travel this route in April or May you should find think snow and ice surrounding Scout Falls. Make your way through Scout Falls the best way you can. At the top of Scout Falls you will arrive in a large meadow called the Middle Basin.

Scout Falls
The Scout Falls area is a good mountaineering challenge. Chosen routes begin at 55-degree snow and increase in difficulty to vertical, and overhanging, mixed climbing. Simply go with what you want. By late-May or early-June the Scout Falls area is melted out (as it was during this year's trip). Melted out, the Scout Falls climb would be a miserable, steep bushwack and is not recommended. Instead, follow the Timpooneke Trail to the Middle Basin where you'll hit snow.

It is worth noting that the road to the Timpooneke Trailhead is only opened on, or after, Memorial Day, and by then Scout Falls is melted. So if you really want to climb this area you'll have to hike an additional 5 miles roundtrip from the winter gates to the trailhead on the asphalt road, or ski it during the winter. Members of my group had done this and said it's worth it--at least once.

At the Middle Basin, you'll receive a clear shot of Scout Falls Couloir traveling directly up the Grand Staircase. This year in June, the Couloir appeared thick and safe. During times of low snowpack, note there is a large stream under the couloir that will weaken the snow until it caves in. Check out the moats next to the cliffs to gauge the depth and strength of the snow. We chose to rope up in the couloir. Not because it was too steep, but because the water was very loud and sometimes it is hard to tell if you'll punch through or not. Just be safe. The couloir is mostly between 35-40 degrees. There are two sections between 45-50 degrees.

Scout Falls Couloir will take you to the grand beauty of the Timpanogos Basin. Under cover of deep snow, during a sunset, I can hardly remember a more awe-inspiring setting. It was awesome. The basin rolls gently to the final headwall leading to Timp's summit ridge. This headwall isn't too bad on the summer trail, but with snowpack, it is much steeper. The enormous cornices solidify creating a near-vertical section at the top. From the basin to the top of the headwall, the steep slope has two 55 degree sections (cliff bands), and the last 50 feet to the summit ridge was over 60 degrees (I guess that's not near-vertical, but it felt like it with a long way to go if you tumble).

Definitely axe/crampons, and a rope to protect against any weakness or thinning in the Scout Falls Couloir. If you are traveling during winter, know precisely what you are doing. This entire route is a major avalanche zone--the kind of stuff you can't survive. Bring avalanche gear if the conditions warrant.

Also remember, it is very cold in the Timpanogos Basin and above, even if it is nice and warm at the trailhead. Bring proper clothing. 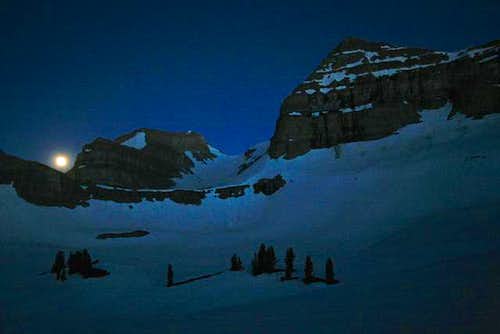