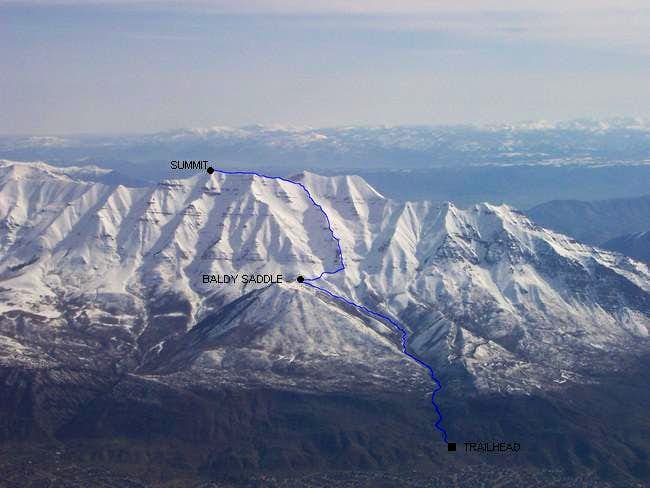 From I-15 take the Lindon/1600 North Orem Exit, proceed east and climb gently. As the road begins a gentle turn to the south, look for Skyline Drive and turn north onto Skyline Drive. Continue on Skyline Drive until Dry Canyon Road, a turn to the north again and in a suburb of humongous homes. Follow the paved road to the obvious TH.

There is now an asphalt parking area, toilet and trailhead signs.

This is probably the safest line on Timpanogos for winter ascents. It is also one of the easier winter routes. Easy is used as a realitive term, however as the SW face of Timp rises 7,000 feet in the space of only a few miles. In late Spring and early Summer, the Coulior Variation of the route becomes easier than the Spur Varation described on this page. This (Spur) route is not recommended in summer. Once the snow melts off the SW face, this becomes a hot and dry mountainside, and the east side is more scenic in summer, with the cirques, alpine meadows, and Emerald Lake. In winter this is a spectacular route.

From the trailhead, follow the trail up Dry Creek. The trail should be easy to follow, even when covered in snow. After a short distance the trail goes through a rock formation sometimes known as the Great Blue Gate. The upper section of the trail is known as the Indian Trail. After three miles you will reach the "Baldy Saddle", at 8332 feet, which is located between Big Baldy and the SW face of Timp. This is where you should set up camp for the night. It is recommended that on day one, that you get a late start, hike the three miles to the saddle and camp. The reason for this is because although this is probably the safest winter route on the mountain, the next part of the route will cross an avalanche chute. This chute is best crossed first thing in the morning and before dawn, thus it is recommended that you camp at the saddle and hit it first thing in the morning.

Pre-dawn on day two, notice the terraces (man-made) contouring the mountain. Contour SE to then along the terrace, crossing the big avalanche chute (aka North Fork Dry Canyon). Bigger slides do occasionally reach this low in the chute, so move quickly. After crossing the chute, climb up to the spur (known locally as Ginsu Ridge). This spur is fairly direct up to "Glacier Saddle" and up the SW face of Timp. There are many cliffs to pass, but the route is pretty obvious. Always pass the cliffs on the south or right side. Follow the steep spur until it fades into the face about 350 feet below the Glacier Saddle, which is very obvious. The next section, depending on conditions may be the crux of the entire route. When we climbed up it, it was steep, but either blown free of snow, or the snow was rock hard. When we climbed down it, the face was iced up and dangerous. It all depends on conditions, but either way, the next section is very steep and forms sort of a headwall. The route is usually either blown dry or has shallow snow, but if you climb it just after a snowstorm, it could slide. As long as it has been a few days after a snowstorm, the route should be OK. Climb up to the summit ridge at the Glacier Saddle. The summit is reached by following the ridge to the north. There will be one cliff to pass on the ridge. Descend the same route, and resist the temptation to follow the North Fork of Dry Creek down to Baldy Saddle. The chute is un-interupted for 3500 feet elevation drop and is up to 45 degrees, so it is a real death trap in the winter.