A walk to see Lake Superior sea caves normally accessible only by boat begins with a stroll across a bay of frozen Lake Superior. This route, only available at certain times of certain Winters, is almost 2.5 miles of flatness, many times bitterly cold and windy. But the reward is sea caves transformed into incredible, and famous, ice caves.  Snowshoes are not required, but be prepared for all conditions.  There was everything from packed snow to glare ice, but thankfully no open water!

Lake Superior, the world's largest freshwater lake, is about the size of South Carolina, or Austria, and is capable of great violence.  It sits between the Northern US and Canada.

Addition 2/14/14:  I am told that this is the first time in 5 years that the caves are accessible, and that visitation is creating a small economic boom for the normally small winter tourism trade in this area.

When word gets out that the Ice Caves are accessible, this route can get very popular.  On the late Friday afternoon I visited, the place was jammed, though the people were spread across the expanse of the cliffs and mostly returning as I was starting out.  A couple I met said they had the caves to themselves that morning, but I imagine the light is better on the west facing cliffs in the PM.

I walked out on this part of the Apostle Islands National Lakeshore on Feb 8, 2014, starting at the Meyers Beach parking area.  Wind Chill warnings existed earlier in the day, and the wind was at my back walking out there. 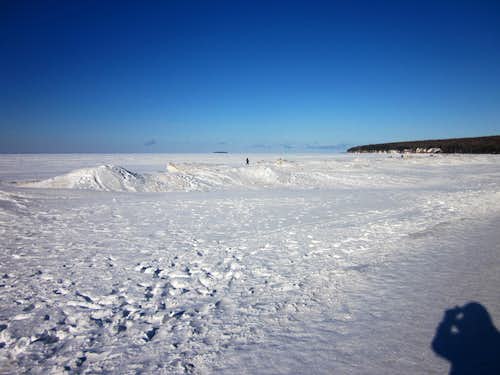 A Stroll across Lake Superior 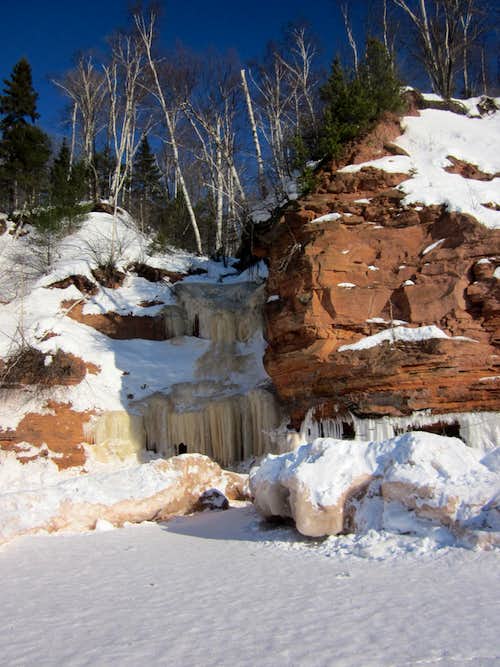 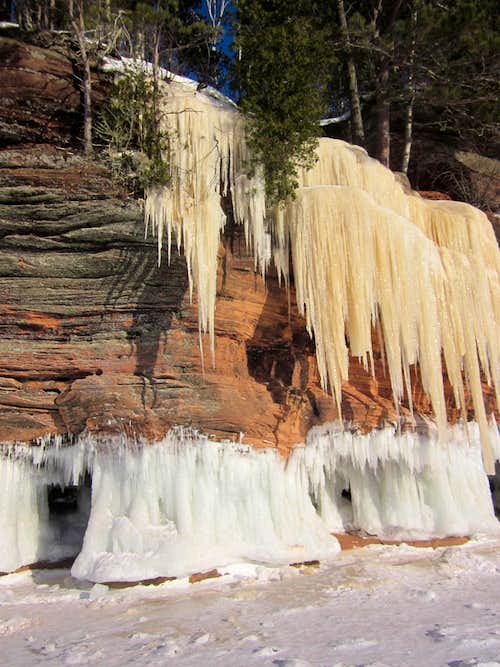 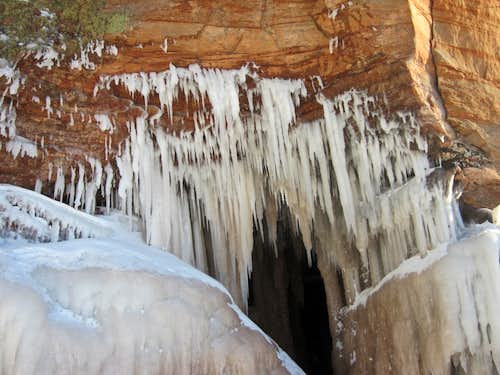 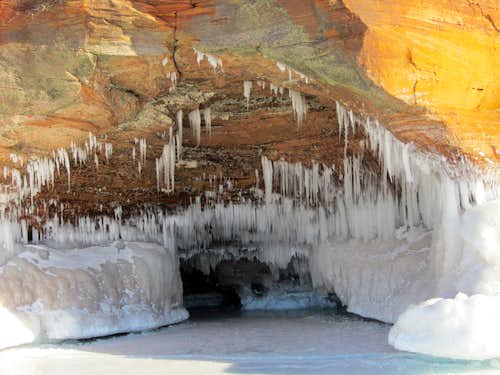 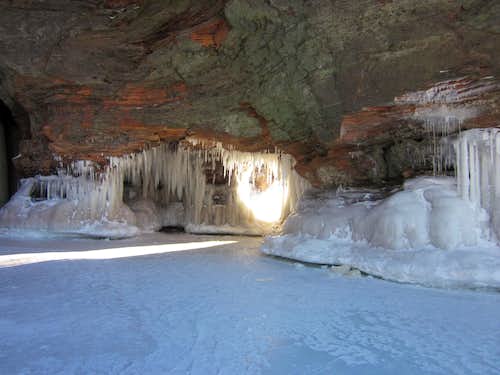 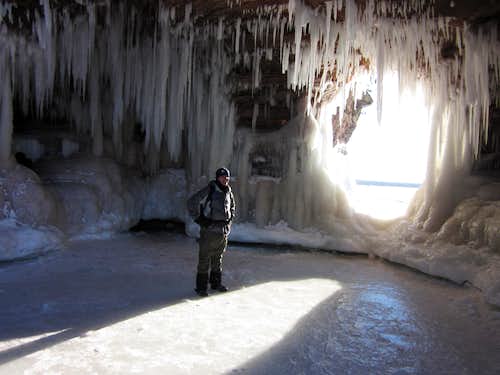 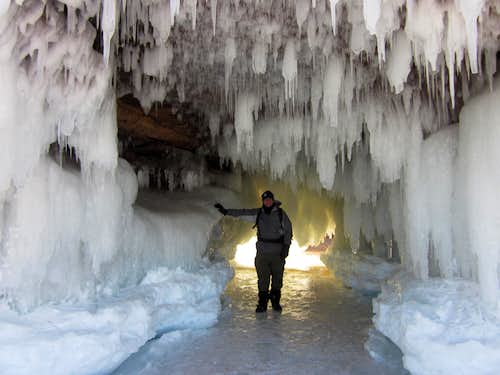 Icicles on the Lake Superior Coast

The walk back into the teeth of the wind howling across the bulk of frozen Lake Superior was not fun, but the trip was totally worth it.

...something so beautiful come out of this brutally cold winter we are having here in the midwest. I had never heard of these sea caves before, so thanks for posting. Truly beautiful..and unusual. Happy Trails, Mark

Thanks Mark. The day started at -15 degrees F but had risen to about 10 degrees that afternoon. It was nearly as brutal in Chicago when I left, so I decided I would may as well go here and be cold!

I have been living in Janesville for the past 14 years and am ashamed to say that I have not been to northern Wisconsin yet.

When I heard about this place, I kept all the details in a folder on my desk in hopes I would get a weekend this winter to go up there - and that the weather would cooperate. Everything aligned and I was able to enjoy a frigid but sunny 2 days.

You are very welcome. My pleasure, truly!

Stu, thanks so much for sharing this! I had just read about ice caves forming on the lake itself, based on wave action and quick-freezing temperatures, and wondered whether I was close enough to any of them in Cleveland. Apparently Chicago is! And the sea caves make for even more amazing icicles, and sheer size. The sunlight blazing in through holes in those last two photos- just perfect.

We're doing a big tour of Utah in mid/late September. I'll do my first post at this site, and share some of the arches and canyons!

Whoa! Big Al on Summitpost! Glad to share these with you my friend. If you get some time, these are 8 hours from Chicago, and I had an even more spectacular hike the next day, which I plan to post soon. I will give you more details if you need them.

I've only been to the Apostles once, in summer as a kid. This is a beautiful change of pace from what I remember. Maybe I need to take a four day weekend and hike out there; I've got relations in Ashland and Bayfield Counties where I can stay. Thanks for posting the TR!

This was my first time up to the Apostles, and I will be back, I almost want to go right away and get some more pictures. If I had relatives there, I would go back soon!

Is it safe to assume someone would object if you threw up a line of bolts, a la Helmcken? In any case kind of pointless given how rarely it forms.

Do not know much about mixed climbing, but there is nothing of a size that would be worth it, I would think. Especially looking up Helmcken!

Per NPS, it's illegal to climb there. Also, the rock is really soft, sometimes crumble-in-your-hands soft.

Thanks for the info!

I guess my bro wasn't kidding about the cold when he was at Lake Superior Sate University. It's a brutal year, thanks for sharing!

I love visiting but I am not sure I could live there all winter.

There's something you don't see everyday!

Great pics and report. This is something I would love to see someday. Thanks for the stoke!

Re: There's something you don't see everyday!

Thanks! You don't know how close I came to not going (8 hour drive from my Chicago home base). I am glad I went!

Re: There's something you don't see everyday!

I'd totally drive 8 hours for that. As a state highpointer, I've driven a lot more for a lot less, as I'm sure you have!

I heard about this from the internet and my friend. I was planning to drive with her all the way there from Windsor Ontario, about 3 weeks ago, though the road conditions did not allow us to do so.
Thanks for sharing! (attached per your request sorry for a delay)
Safe hiking! Aranka