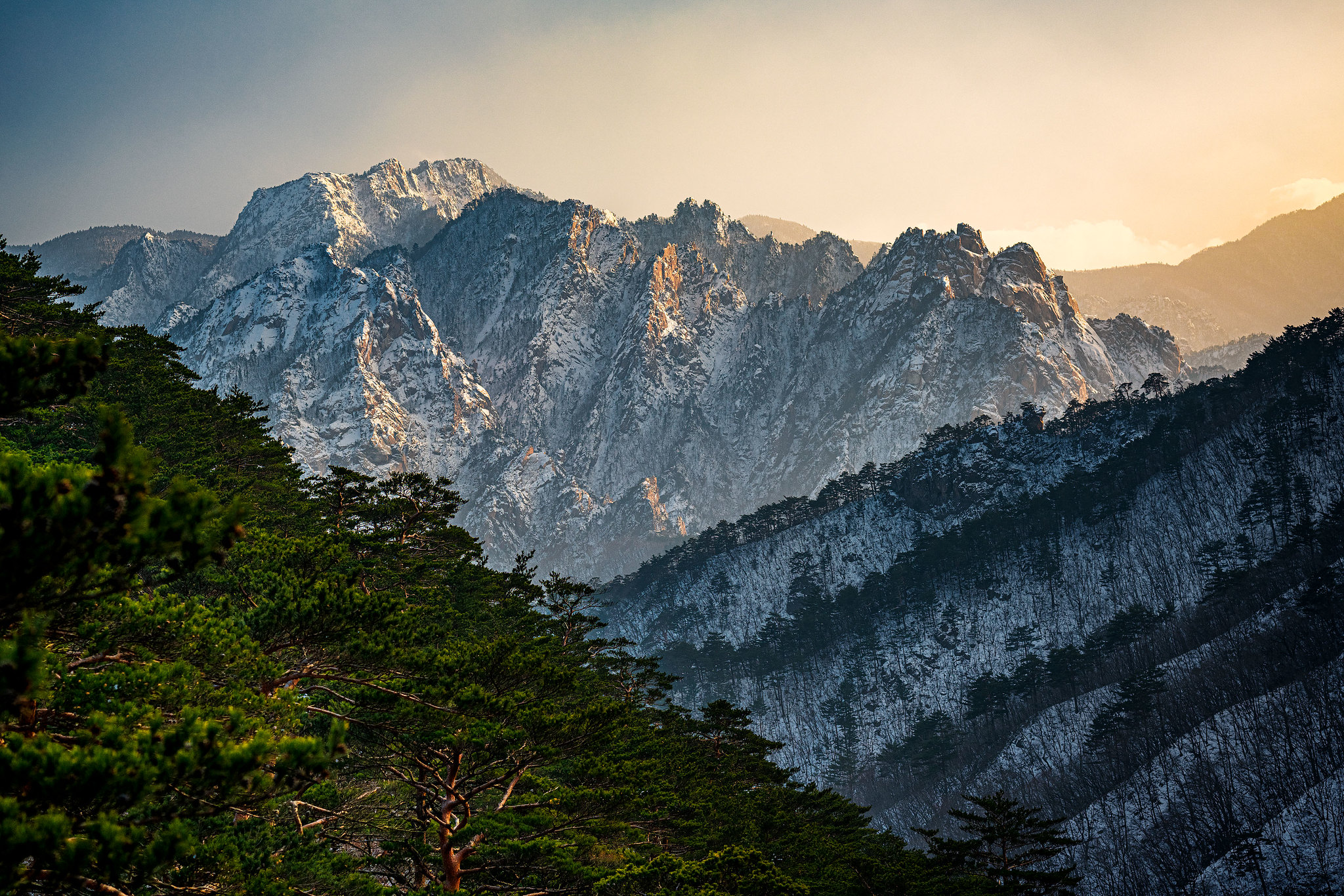 Seoraksan National park was designated the 5th national park in Korea in 1970 and chosen as a nature preservation area on November 5, 1965 Also, internationally recognized for its rare species, Seoraksan is the area in Korea to have been designated as a Biosphere Preservation District by UNESCO in 1982, and in IUCN recognized its rich natural resources and labeled it category Ⅱ(National Park).

The total area of Seoraksan National park is 398.539㎢ and it is divided among the areas of Inge-gun, Goseong-gun, Yangyang-gun, and Sokcho-si, Naeseorak (Inner) is in Inje, Naeseorak (South) is the area from Hangyerteong (Ridge) to Osaek, and Oeseorak (Outer) lies in the eastern area across Sokcho-si, Yangyang-gun, and Goseong-gun. Including its main peak, Daecheongbong, Seoraksan has a total of 30 imposing peaks spread across its territory such as Hwachaebong, Hangyeryeong, and Madeungryeong. 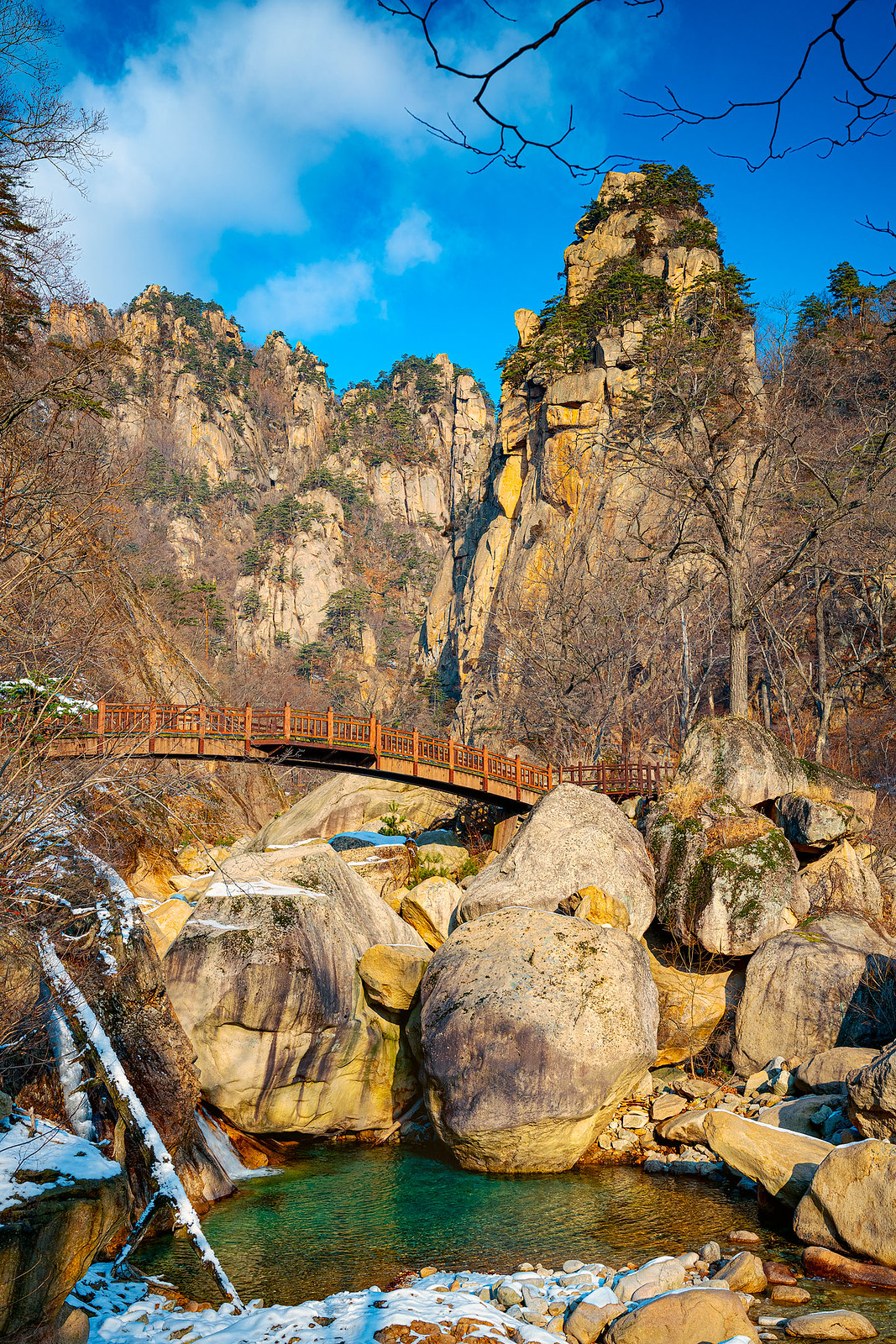 Clear blue waters and steep cliffs of the Osaek valley area of the park.

Over 2,000 animal species live in Seoraksan, including the Korea goral, Musk deer, and Other. There are also more than 1,400 rare plant species, such as the Edelweiss, here as well. 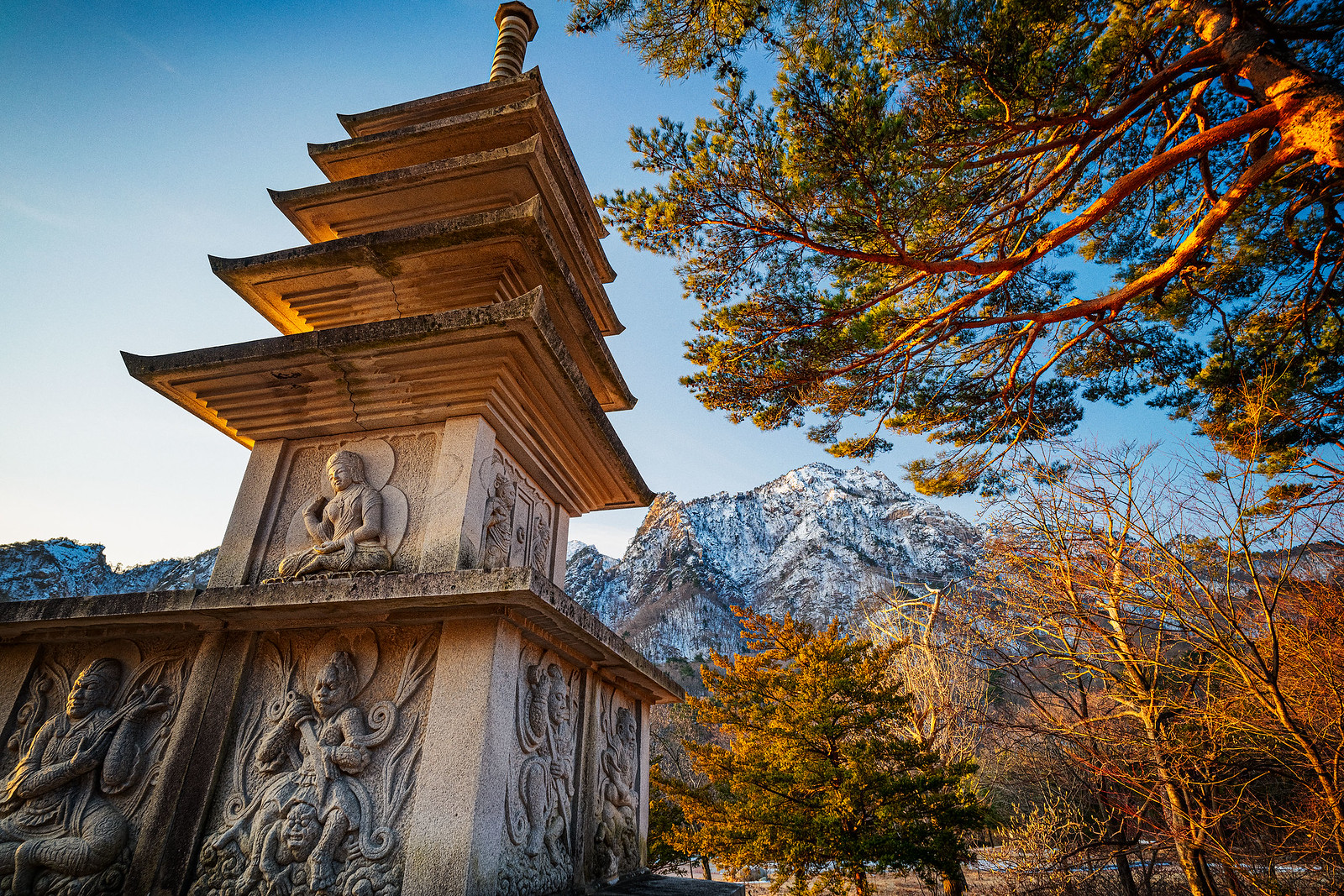 A pagoda near the park entrance in the morning light

In addition to the natural wonders, Seoraksan has some interesting cultural sites as well.  At the park entrance there is a beautiful temple, which offers temple stays, and a large Buddha statue.  Up the mountain towards Ulsanbawi, there is an old hermitage site and temple built into a cave, with many inscriptions carved into the nearby rocks.  To note, the bathrooms at the temple near the park entrance are the nicest public bathrooms I have ever been in, ever, in the entire country of Korea. 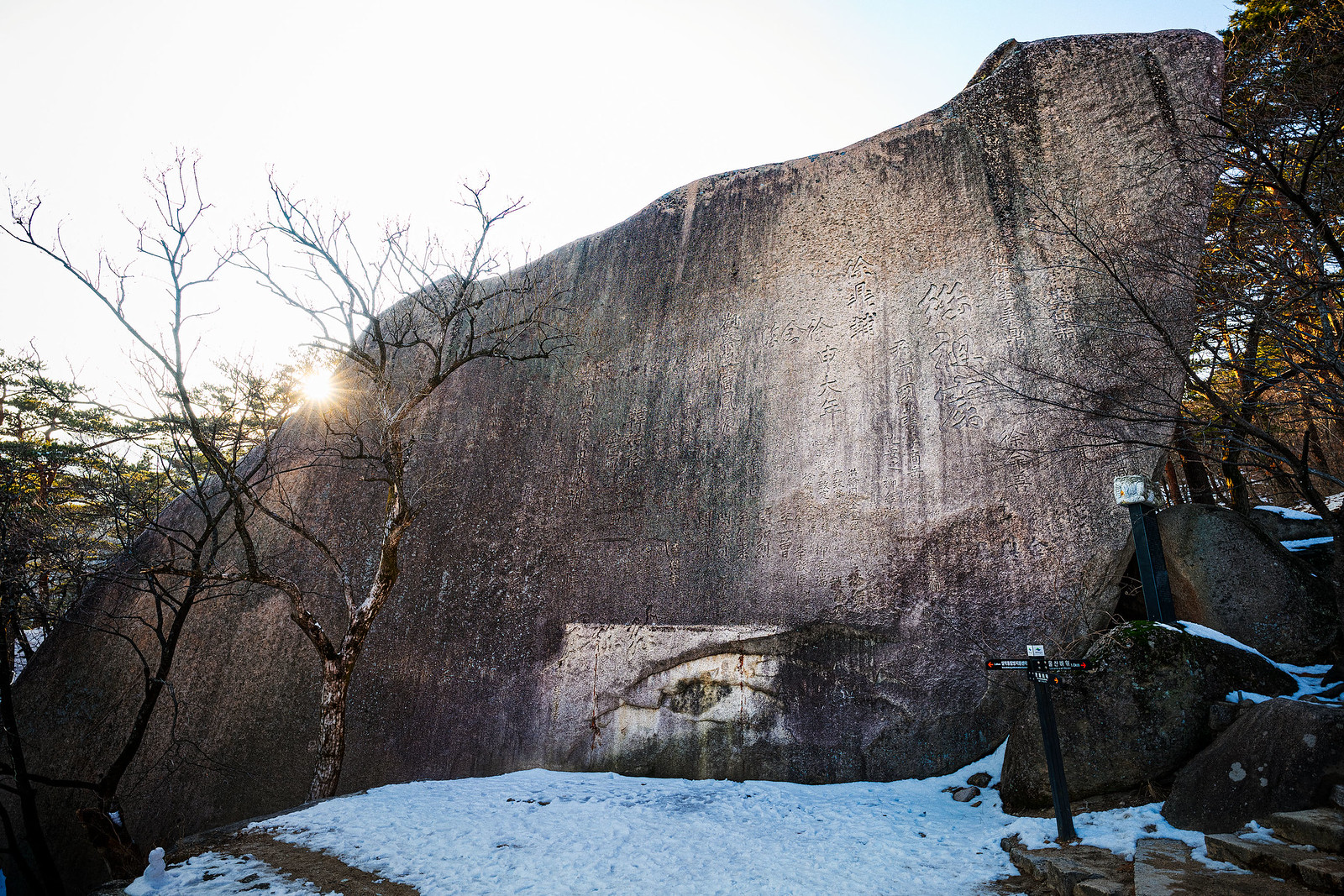 Inscriptions on a large boulder near the mountain hermitage temple 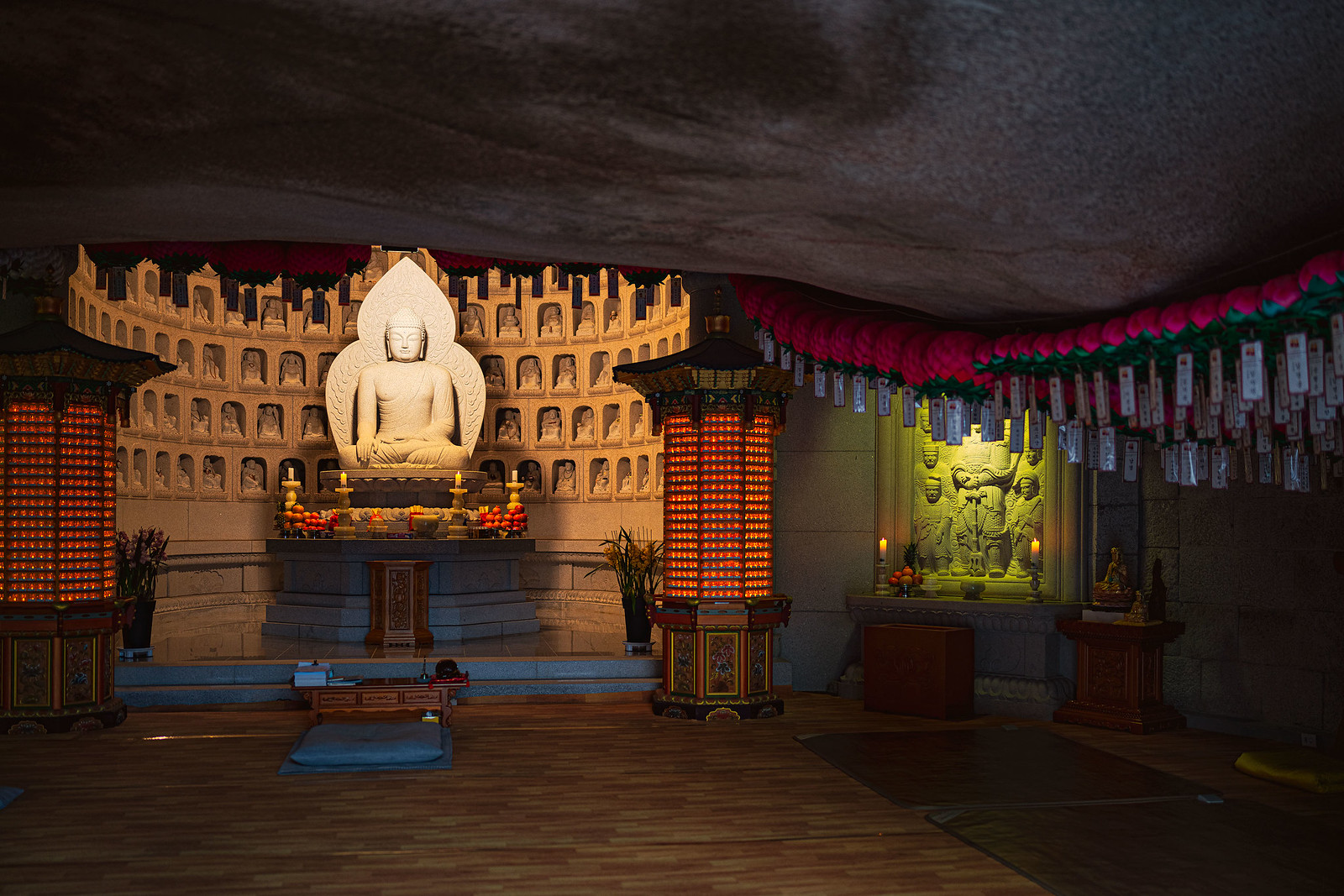 The inside of the cave temple near Ulsanbawi 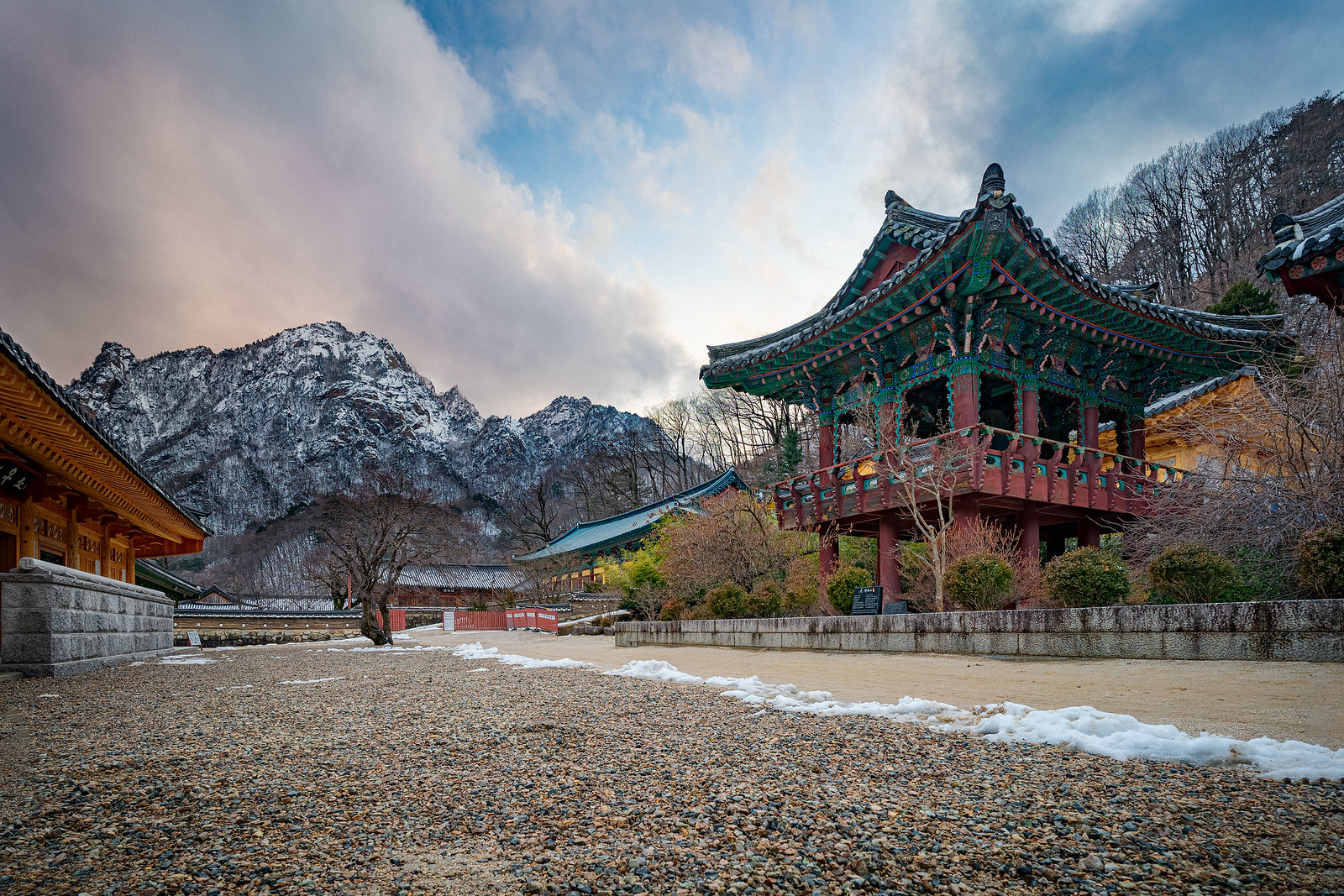 This temple near the park entrance offers temple stays, fancy bathrooms on the left 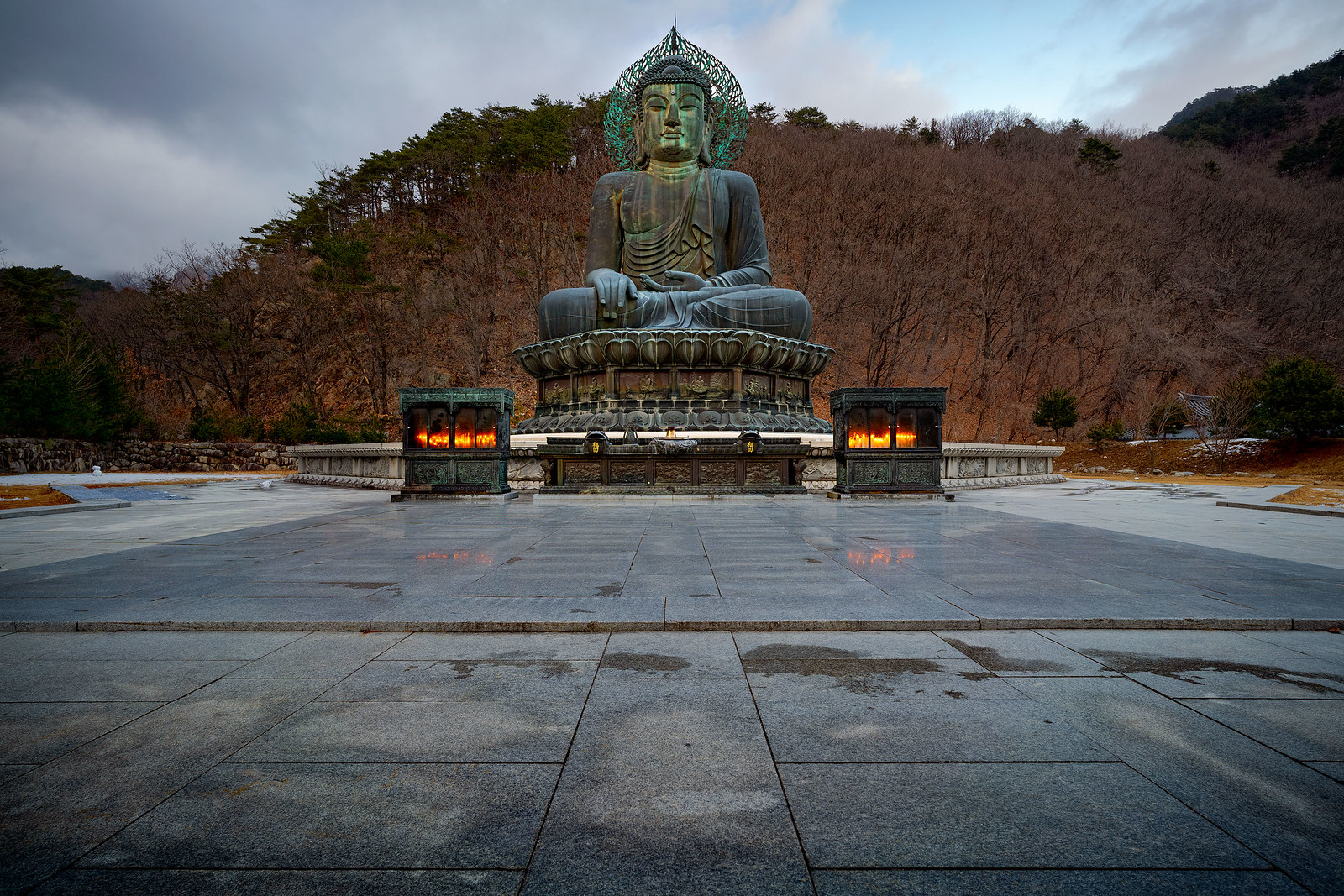 Seoraksan National Park is renowned for its steep walls and deep valleys.  It is the only mountainous area of Korea that truly looks like an alpine paradise.  Given the spectacular scenery, it is one of the busiest parks in the country.  For many Korean mountaineeirs and hikers, peakbagging in Seoraksan is a close tie with Jirisan and Hallsan as the "classic" achievement in Korean mountain culture.  I had the odd coincidence of being on the summit with a film crew from KBS news, and they did a short interview during which they told me that Seoraksan had "the most difficult mountains in Korea".  I'd be inclined to believe them. 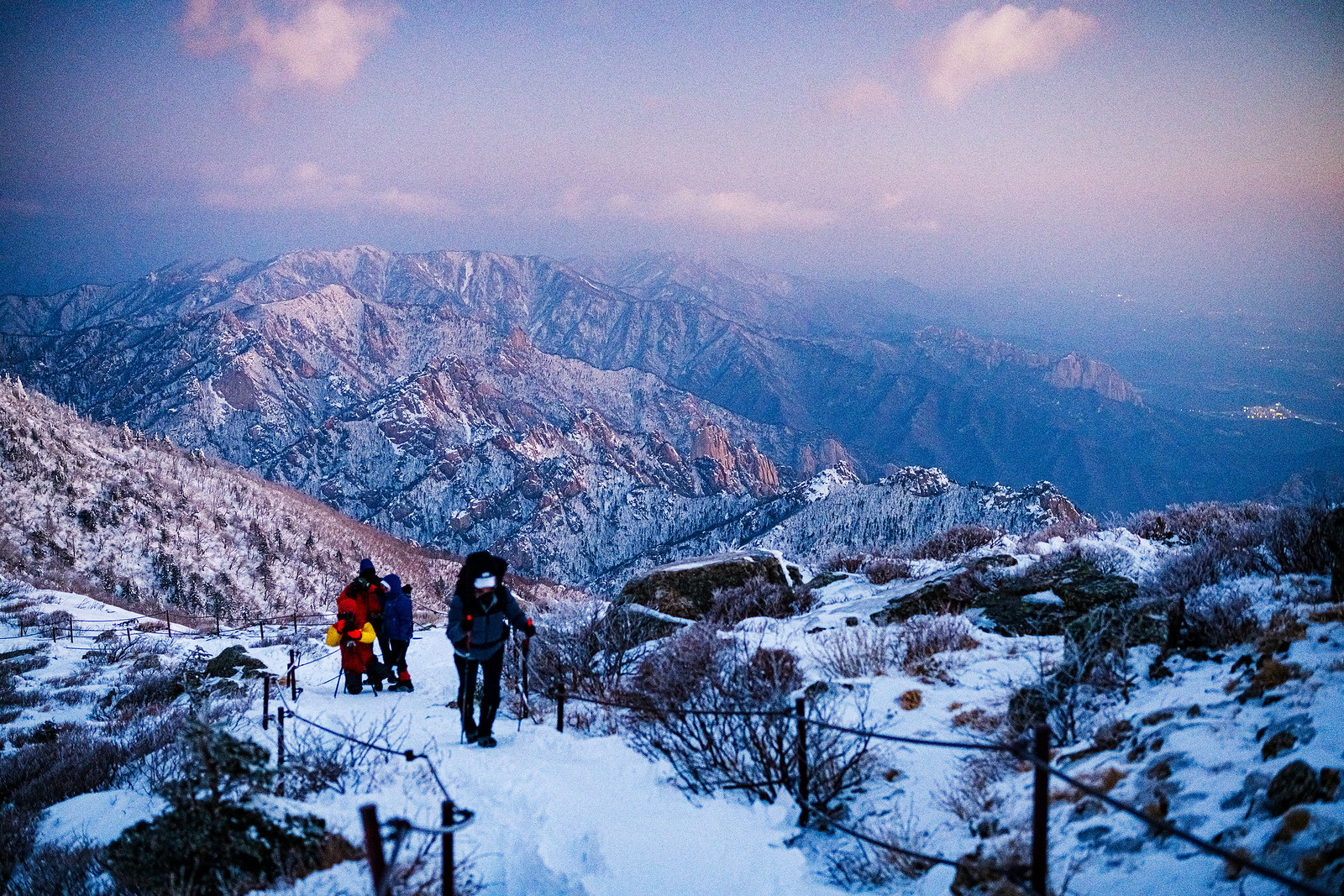 At the earliest light (hence the high ISO), a film crew from KBS makes their way to the summit of Decheongbong as part of their mountain webcast series

For hikers and non-technical peak baggers:

Decheongbong is the highest peak in the park, and the 2nd highest on the mainland of Korea.  The #1 cultural thing to do, and I highly recommend it, is to be at the summit before sunrise, and watch the sunrise from the top.  This is the way many traditional Koreans hike every mountain.  There are 3 main routes to get there.

From the south, is the shortest route.  Steep, but gets to the summit in least distance, albeit with little aesthetic value during the hike.  Truly a peak-bagging route, because one will not get to see any of the greatness of Seoraksan National Park along this route.

From the north, the main trail through the center of the park.  Long-ish, but doable in a day hike.  I did it in the worst possible winter conditions with a heavy load of photography equipment (where all these pics came from) and it was about 7.5 hours to the shelter.

From the west, a very long trail but with ample opportunity to see sights. Most likely an overnight stay in Suryeomdong shelter on the way.  Sadly in "fire risk" conditions, the first trails to get shut down are these ones that run east to west through the park, so this may not be an option. 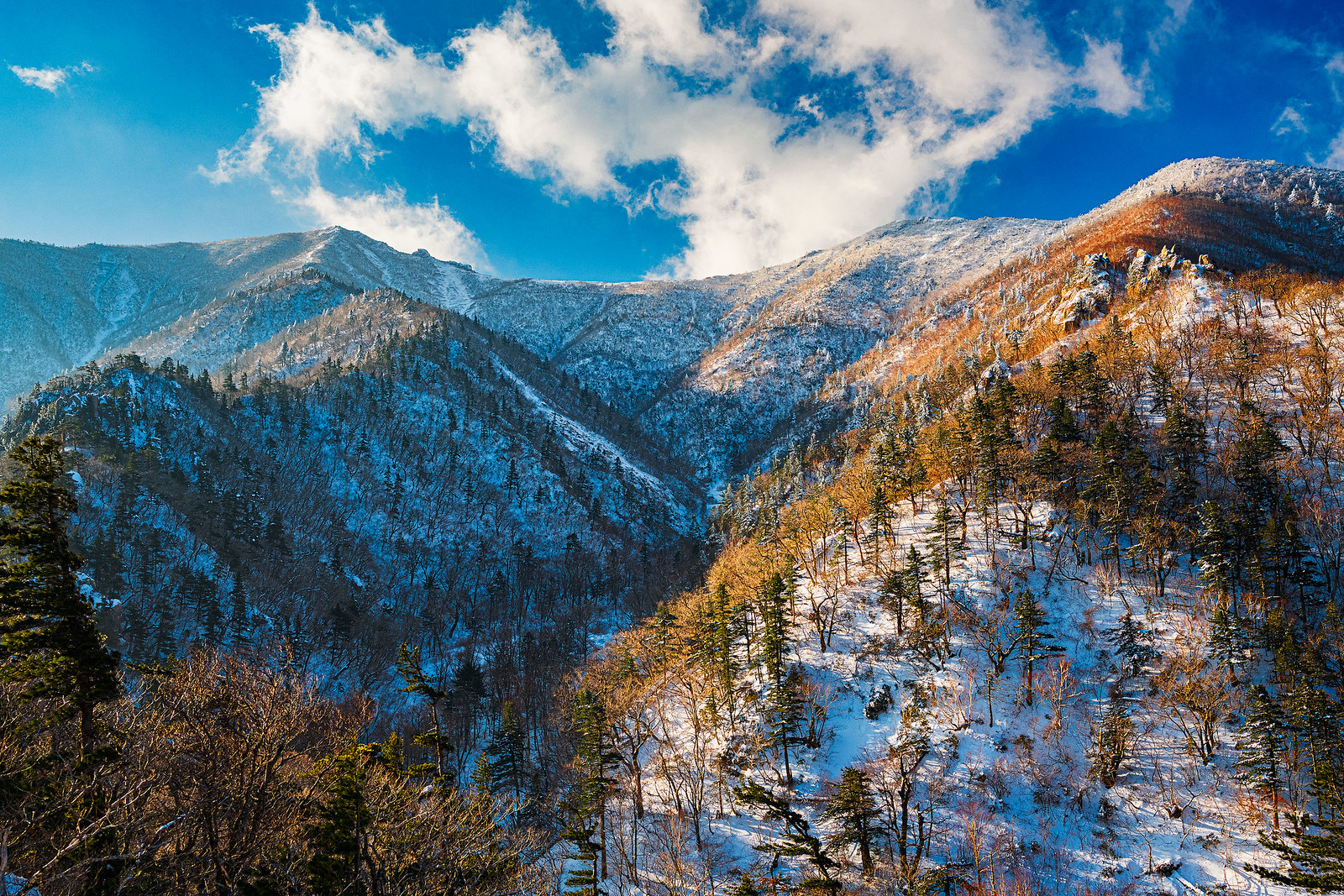 Decheongbong is the left peak, the trail follows the sunlit ridge on the right 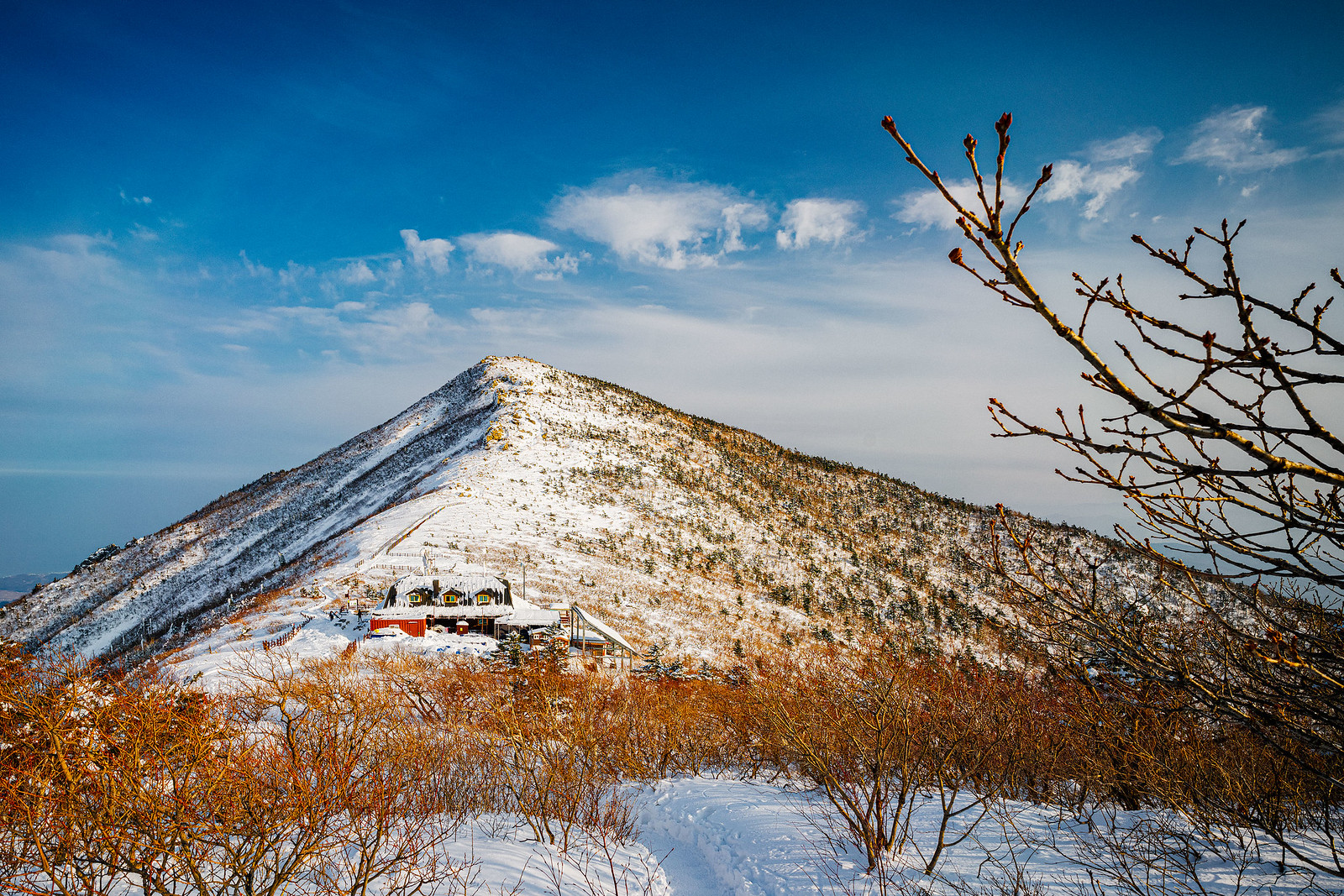 Spring and Fall are the most popular seasons.  In particular, autumin in Seoraksan National Park is impeccable, and also beyond crowded.  The trails will be fairly dry and clear, easy to navigate, and comfortable to carry light loads from shelter to shelter.  All this adds up to high levels of congestion.  Personally, unless it was a weekday trip, I would pass despite the beauty of the fall colors or spring blossoms.

Summer is both extremely humid, and hot. Unless one is used to hiking in those conditions, it would be very unpleasant.  I choose to spend my mid-summer in Korea walking as slowly as possible between cool locations to enjoy a cold beer.  Summer is also somewhat of the "rainy season", so that doesn't do hiking any favors either.

WINTER!!! The BEST season for Seoraksan.  Snow, ice, and cold temps keep the crowds at bay, and provide excellent scenery and that soft winter lighting.  Even weekends are tolerable in terms of crowds.  The trail conditions are also optimal during winter.  This part of Korea gets the most snow, so the trails will likely be covered in snow, probably hard-packed and icy.  This will even make the stairs in the mountains a significant challenge as they get packed down at an angle.  These challenges, combined with the cold (I had 70kmph winds and a windchill of -50 on my summit morning) really do wonders in keeping the crowds to the die-hards only.  Additonally, these sketchy trail conditions made it feel like real mountaineering.  I had to put on my mountaineering boots, crampons in some sections of ice, and use real footwork techinques.  It was absolutely perfect.  Don't miss out on mid-winter in Seoraksan. 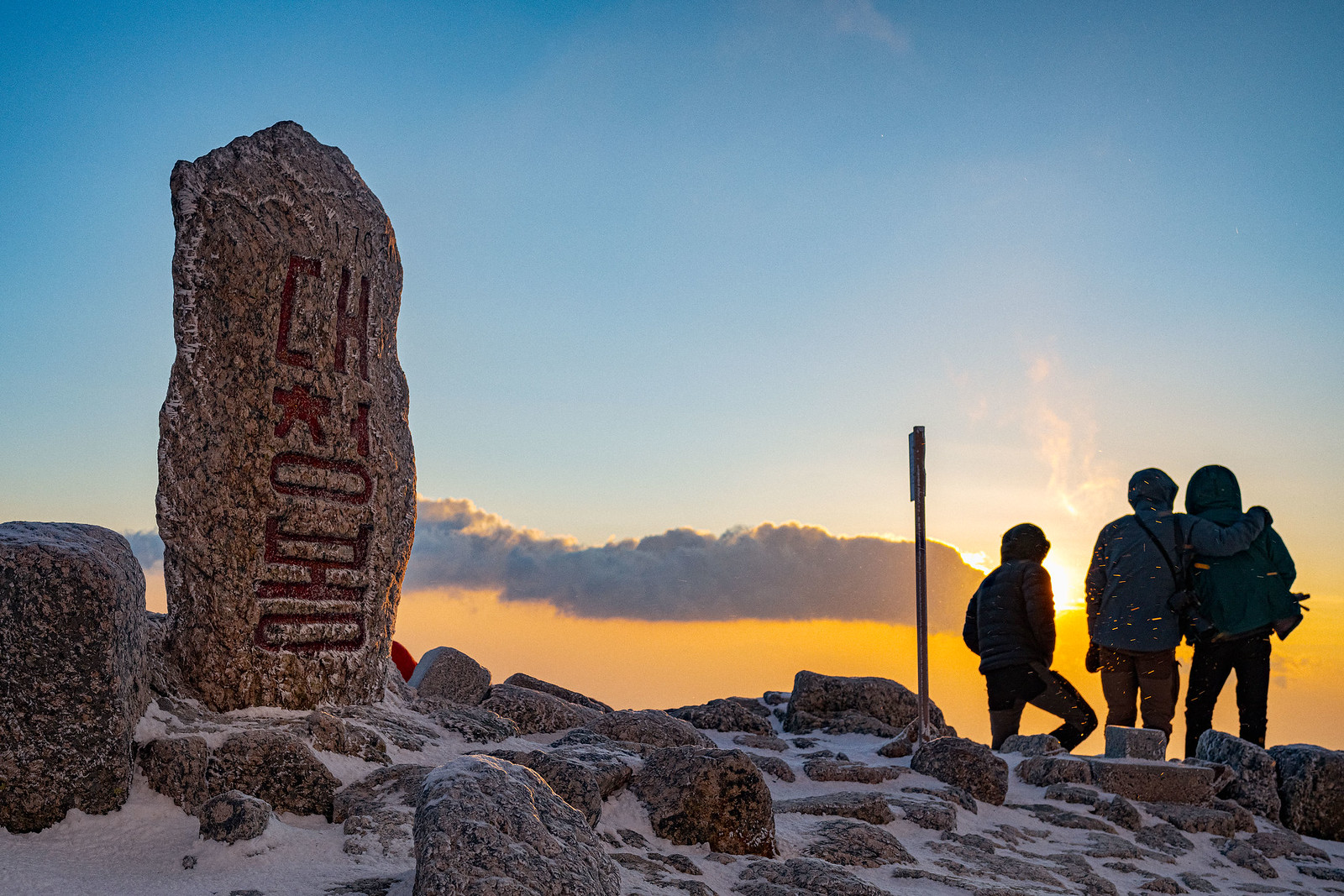 Hikers on the summit for sunrise - note the backlit snow in 75kmph winds is blowing straight sideways haha. 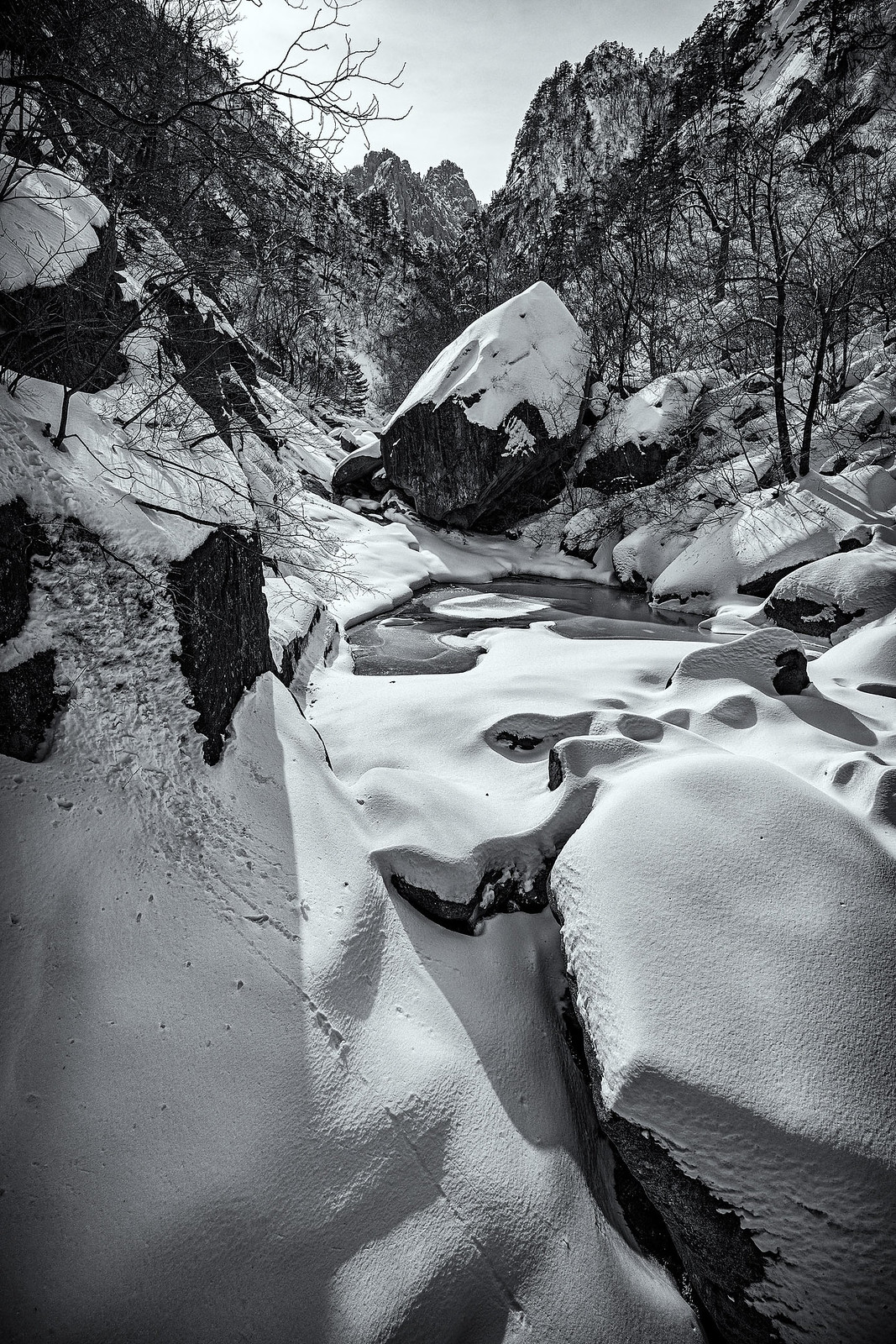 Fresh snow on the main trail to Decheongbong 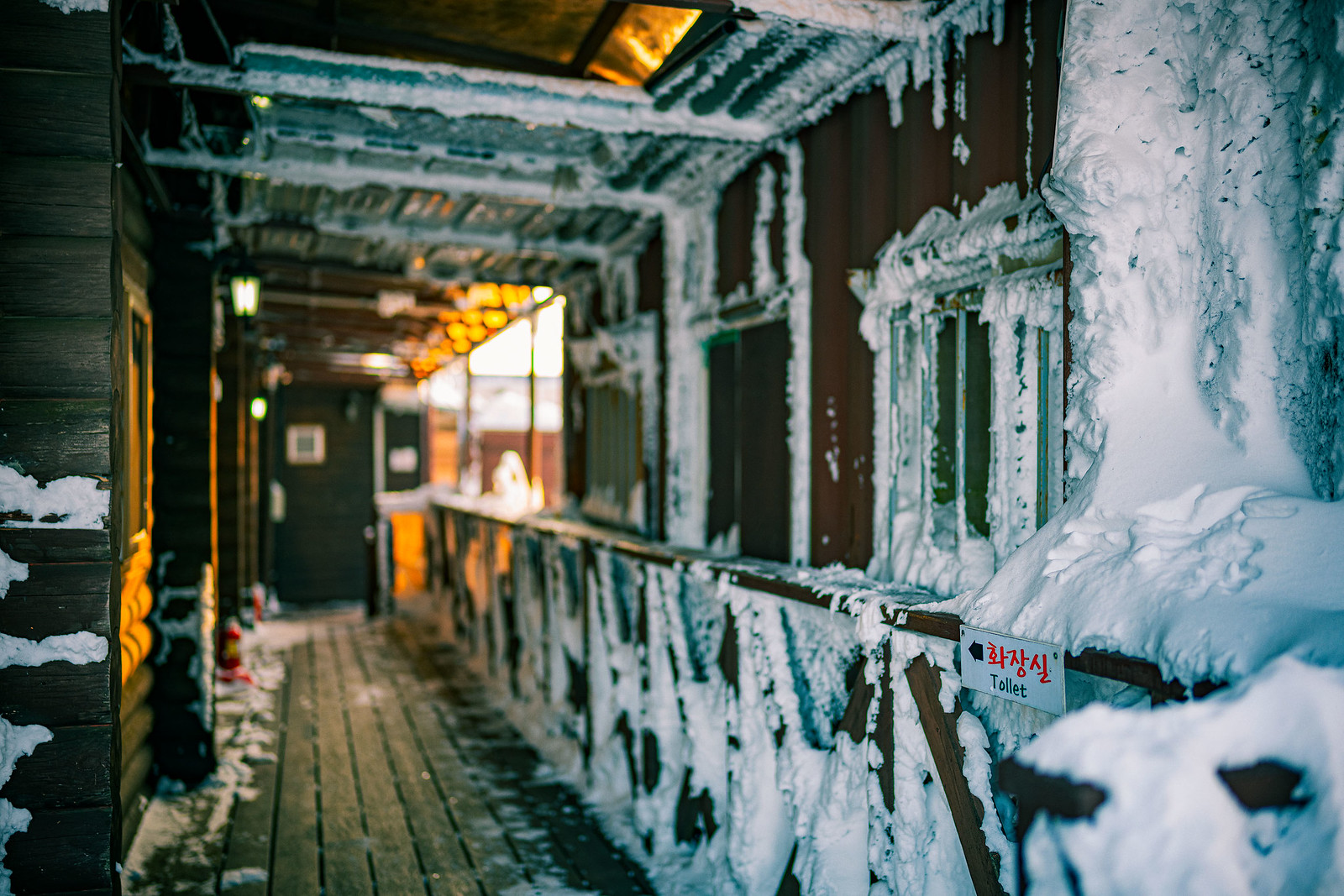 Seoraksan is home to the largest collection of multi-pitch trad routes in the country.  There is an okay amount of English language climbing information on the Seoraksan Mountain Project website, so I wont repeat it all.  The reality is that Korea does not leverage its rock climbing as a tourist attraction, and as such there is vastly more information available if you can navigate Kakao and Daum blogs and other Korean Language web resources.  I would venture a guess that there are hundreds of routes in Seoraksan National Park, however Mountain Project is the best english resources I've found, and its under 50 routes.

Ulsanbawi is one of the notable locations for rock climbing in Seoraksan National Park.  This unique monolith not only features dozens of climbing routes up its steep walls, but it offers the only (that I can find) multi-day climb in the country.  There are supposedly 3 traverse routes that cross the entire thing (pictured below), ranging from 5.9 to 5.11/12 depending on how much you circumnavigate versus climb straight on.  You must request an overnight climbing permit at the park office to be allowed to bivy on the route. (I'd get a permit to climb period, just to get the latest info on trail/area closures).  This is also the only instance I know of where you can wilderness camp in any national park. 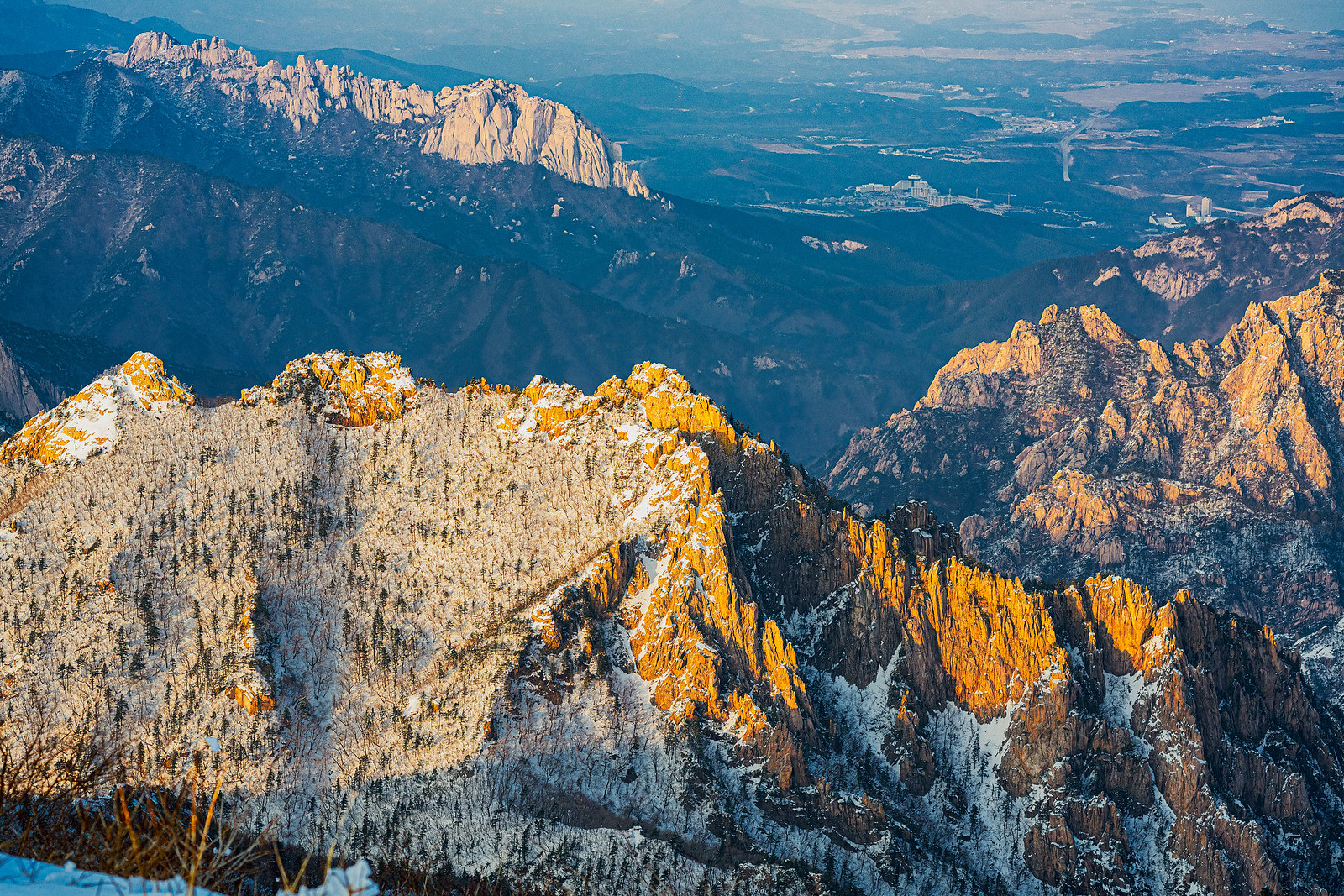 Ulsanbawi is the distant-left monolith ridge 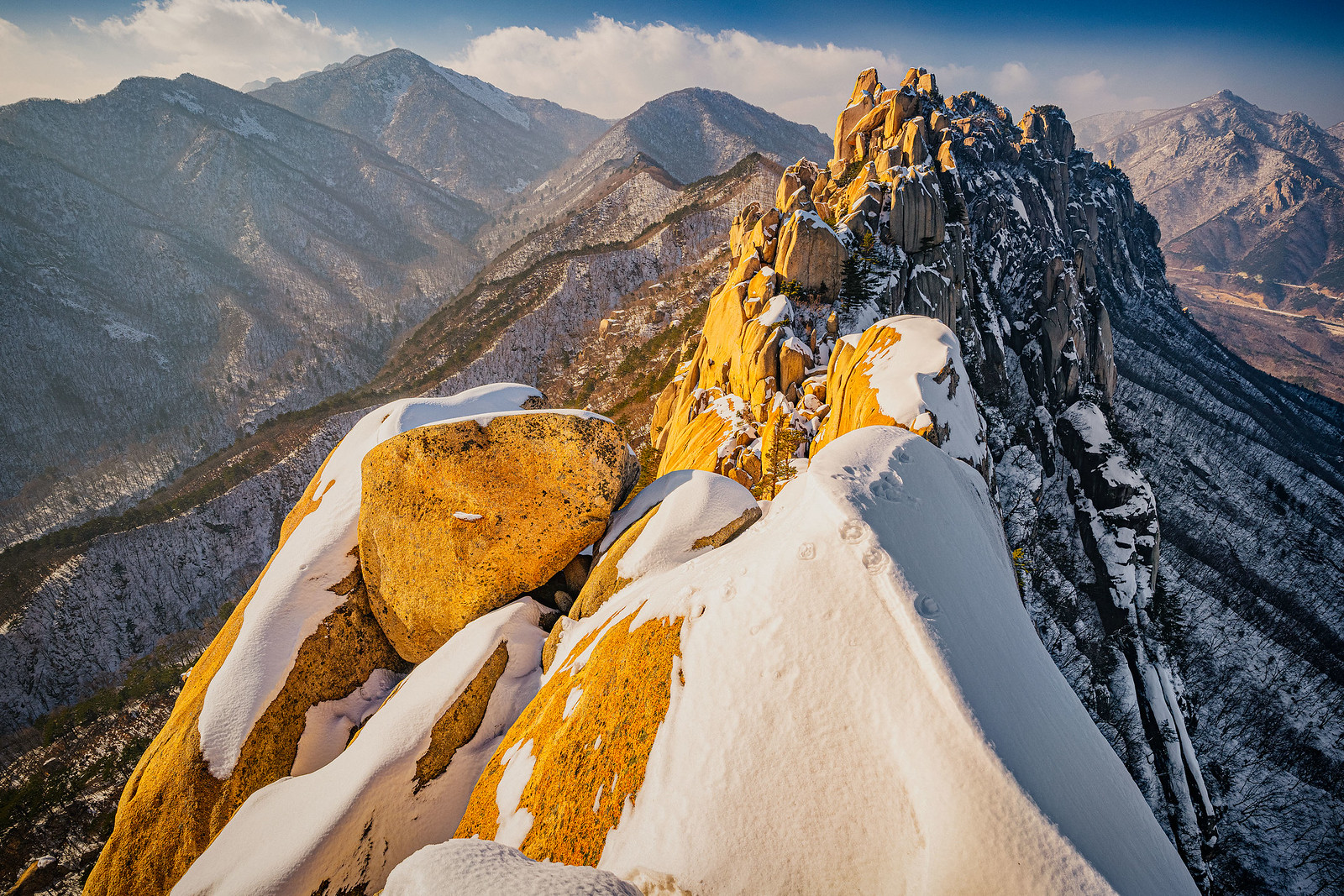 Wide angle view of Ulsanbawi from the ridgetop

A bit more detail of the traverse climbing route

Spring and Fall are the most popular seasons just like for hiking.  Rock climbing is very popular in Korea, so expect lines for all but the hardest of routes. I haven't climbed a ton, but I have noticed that the crowds don't go away until you get to around the 5.11c level.  Often times, a group will have one very strong climber who leads, then they essentially daisy chain top-rope one another to get the whole group up, jumaring if needed to overcome the actual climbing. I always tried to stick with weekdays.

Summertime, unless you are coming from climbing in a place like SE Asia, will seem uncomfortable and sweaty.

In winter, when it gets cold enough, there are large waterfalls that freeze and offer ice climbing, including multi-pitch.  I have not particiapted, but I know there are often Ice Climbing festivals/competitions in Korea.  The largest waterfalls are in the southern part of the park near Osaek.

I had a car while I was in Korea, and I just opened up the Kakao Maps app, put a pin on the park entrance, and let it navigate me.  It was very easy and got me straight there.

Parking lot is small and fills up very fast.  I suggest getting there well before the park opens and just pay on your way out.  Don't worry, they will notice your car and make a note to collect a payment when you try and leave.

There are public transportation means of getting there, but I just don't know them.

Top: General Map of the Park, shortest trail to the high point is outlined. Bottom: Trail map of the park with "difficulty" and "hike times".

Aside from that one exception for traversing Ulsanbawi, no wilderness camping allowed.  You must reserve a shelter or campground site.  I stayed in both the Jungcheong shelter, and at the Seorakdong campgound. See the Korea parent page for tips and the websites for making reservations. 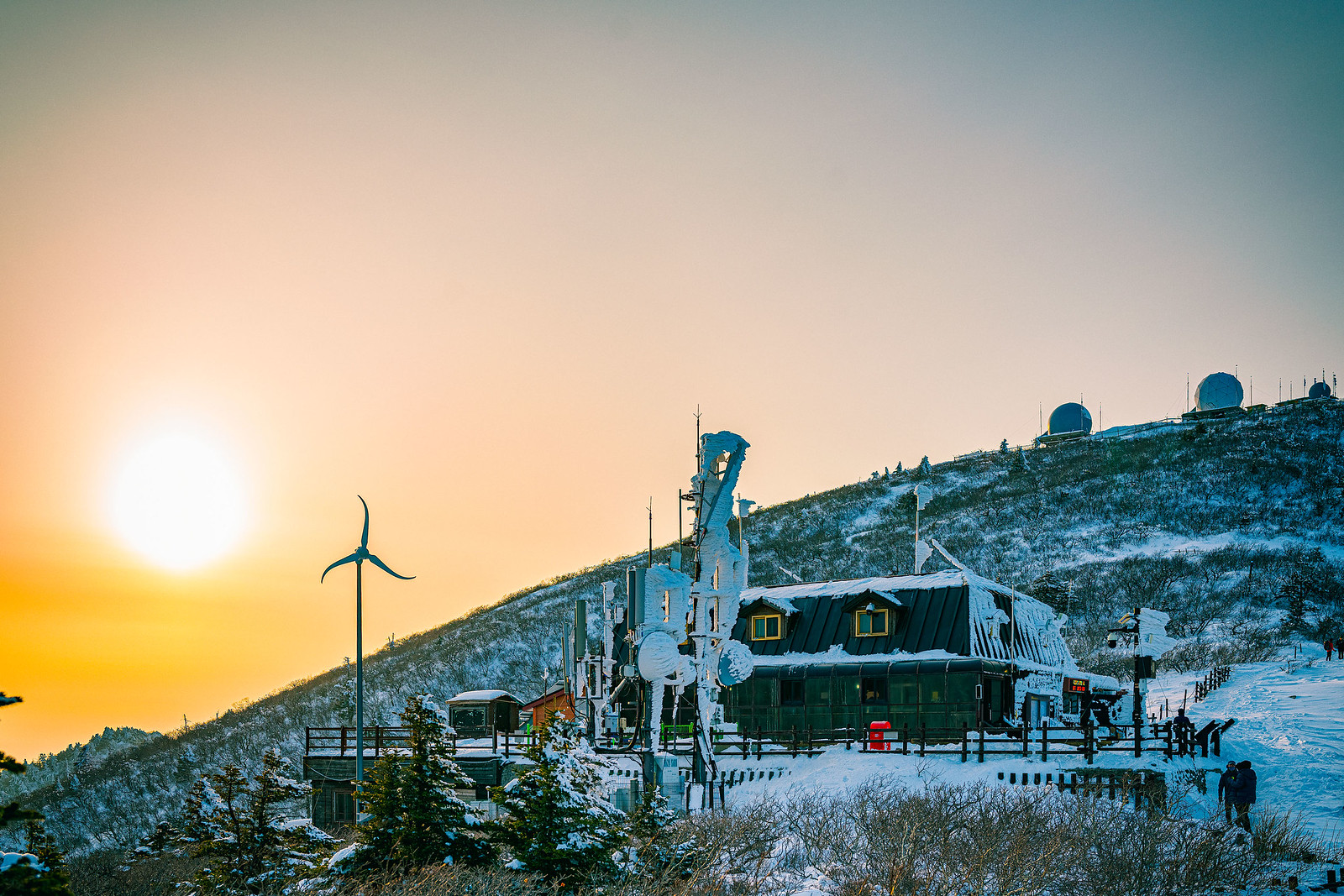