The first west-facing wall on the south side of Reimers, Shortcake Wall, aka Oblivion Wall, offers a handful of short but nice routes and is often open when nearby Prototype Wall has people on its popular routes. Although the routes are short (like 30', no more than 3 bolts to a route plus anchors), they are of good quality. Despite being quick to access and not being obscure, the routes are not as polished as the moderates at Dead Cats and Prototype Walls are. First bolts tend to be a little high, and starts can be tricky, so many people stick clip the first bolts.

Because of the position and surrounding trees, the wall does not get sun until well into the afternoon, especially in winter, when routes on this wall can stay wet for several days after a decent rain.
These routes are on limestone.

Reimers Ranch is located off Hamilton Pool Road about 6 miles west of its intersection with Ranch Road 12. It is about 45 minutes west from downtown Austin.
Once through the entrance station, drive about 1.8 mi and turn left into a large parking area signed for a pavilion and for climbing access. A sign points the way to "Climbers Canyon." Hike the trail and then drop into the top of the "canyon" where a spring creates a stream that soon empties into the Pedernales River. This stream includes a waterfall and some deep pools that are great places to cool off after climbing on a hot day.
Hike by or through the stream until a trail becomes apparent. The trail through Sex Canyon (very slick in some spots) splits a number of times. You want the first split that takes you left across the creek (see picture). 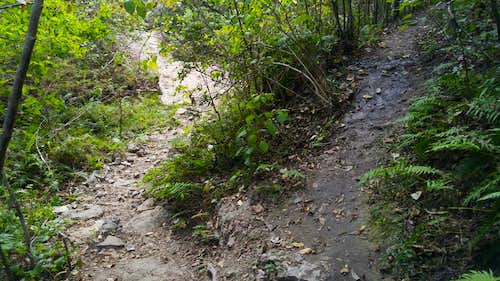 Spur to Cross the Stream
After crossing the stream, hike uphill and right, past a large boulder, and to a spur heading up to the cliffs. This spur takes you to Prototype Wall. Walk left along this wall, passing Dr. Suess Wall, and continue past a boulder pile. After that, you will be at the base of Shortcake Wall.
There actually is an earlier spur leading more directly to the wall, but it is a little harder to spot.

Names and grades come from Austin Climbing: Sport Routes & Deep Water Solos by John Hogge.
From left to right as you face the wall: