Mount Constance is a very interesting and challenging climb. It's known for its strenuous approach trail to Lake Constance, brutal scree, pillow-basalt (lava), complex route finding, the "Terrible Traverse" (TT), and the "Finger Traverse" (FT). This route description avoids both traverses by following the FT bypass route, but unfortunately, the trail and scree still live up to their billing. This page can also be used to follow the standard FT or TT routes, or to make up your own variation/combination of the two.

From Seattle, Constance looks like a ridge rising from left to right, toward the north. You can debate whether Constance or The Brothers look more prominent from Seattle. I think Constance wins a close contest, based on its larger mass and extra 900' of elevation.

The Olympic Mountain Climbing Guide (OMCG), rates both the TT (route "1") and FT (route "1B") as 3rd class, and mentions the FT bypass route as a note for the FT route. If you stay on route, they all stay mainly under 4th class, although I think there are a couple of 4th class moves required on the summit block, and some exposed 3rd class scrambling approaching the block. Due to the exposure, a majority of climbers choose to use a rope on the FT.

The standard OMCG FT route stays to the left after the traverse, and either follows the ridge to the summit, or descends a narrow gully and then ascends the rock gullies that some consider 4th class. According to klenke, the gullies are mainly exposed 3rd class. Our party went left over to the west side of the ridge to bypass the FT, descended the FT route narrow gully, and then descended another 150' east on the snowfield to access the ramp you can walk up to reach the upper slopes. This is the same ramp used by the TT route.

From the summit slopes, the TT looks like 50+ degrees, and is known for being hard and icy, often requiring pickets. I recently talked to one climber who ended up on the TT in fog, and thought it was closer to 35 degrees. On the return trip, the TT was visible, and he said it looked steeper due to the exposure. As the TT pictures show, a slip and not arresting quickly would likely be fatal. Much of the TT melts out in late season, making it a straightforward crossing some years. Look at the last picture in Eric's trip report from his West Arete climb.

I climbed Constance on July 12-13, 2008, a big snow year and late summer. Our conditions were probably more like late June for a normal season. That seems to be a near-optimal time for the Finger Traverse route. Considering the amount of time spent on exposed ledges, it would be best if they are melted out. If I was going to climb this in late-May or early-June, the Terrible Traverse might be the better option. 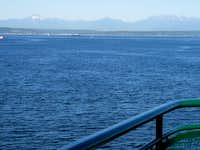 Mt Constance, right, and The Brothers from the Seattle-Bainbridge ferry

Lawrence and I caught the Seattle-Bainbridge ferry at 8:45 am to rendezvous with a nine-member Mountaineers party on the other side of the Hood Canal bridge. A nuclear submarine passing through the canal on its way back to Bangor delayed us by one hour. I wondered why the submarine couldn't pass UNDER the floating bridge, but understood why they wanted some fresh air.

We parked at the Dosewallips River road washout around noon, and mounted our bikes around 12:30. There is a trail that climbs above the washout, and the road grade is ride-able the rest of the 3.8 miles to the trailhead. Around 1375', the road crosses a bridge and curves left, and the trail starts by a sign that reads "3400' climb in 2.0 miles" which is pretty accurate. We stashed our bikes, regrouped, and headed up the "trail" around 1:30.

The first half of the trail reminds me of Mailbox Peak, a real quad-burner, but mainly a hike with just a little use of your hands. It flattens in the middle near the stream, a great place to get water and take a break. The trail continues at an easier Mt Si grade before steepening and becoming a legitimate class 2-3 scramble in a few places. There's one place where the tread is loose with some exposure toward the stream, and I was making liberal use of the veggie belays. After arriving at Lake Constance, we setup camp on the north side around 5:00. I was dehydrated by the 75+ degree temps with little air movement. There aren't too many campsites, but we found good places to set up a couple of tents and excellent bivy sites near the lake.

The next morning I discovered that the critters scurrying around my bivy sack at night had decided to munch on my pole handles--MMMmmmmm, salt. My body could have used that salt and maybe some more potassium later in the day. We headed up Avalanche Canyon around 5:00am, at first on snow, and then on a climbers trail that helped speed our progress over the talus. Try to follow any trail, putting off the inevitable climb on loose scree as long as possible.

The south side of "The Thumb," a large rock feature on the canyon's left side, marks the location of the South Chute. Eventually you will see the cat's ears, which means you're getting pretty close. We tended to stay to the right on more solid rock as the chute narrowed, and with a group of nine, had to be extra careful to minimize kicking rock. The chute tops out around 6580' for a 1900' gain from the lake.

After passing over the saddle, there is a nice flat area with views of Puget Sound. The route descends about 175', and then turns left, up a wide scree gully. We found the going easier on the left side, sometimes scrambling up on solid rock. The gully narrows, and you follow the left side up to a notch in the east-west ridge.

From the notch you can see the summit, and the end of the ramp leading up to the upper slopes near the summit. Drop down about 75' on steep snow, and then turn left and begin contouring up the north-south Mt Constance ridge. 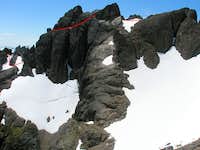 After passing through the gap between the buttress on the left and a large rock on the right, follow ledges N-NW toward the FT. Note that the large rock on the right side of the gap is visible from the summit ramp, and marks the start of the second red segment. The only running water we found was from a snow patch during our decent on the ledges below the FT.

My topo map marks the approximate location of the FT bypass route with the waypoint "FB." There is a slight break in the summit ridge that allows easy passage over to the west side. I'm not sure where this waypoint is in my route picture from the summit, but think it is behind the block of rock on top of the FT. To climb the FT route, you stay right. The FB route follows a ledge on the west side of the ridge. The crux of the FB route is a 10' 3rd class chimney with some exposure. At the base of the chimney, another easy ledge leads back north to meet the standard FT route.

The Route from the FT to the Summit

The standard OMCG FT route follows the main ridge, or descends a narrow gully and climbs one of the rock gullies up to the open slopes below the summit block. Some of the rock gullies are easier than others, and this part of the route may require some 4th class climbing. According to klenke, these gullies are mainly exposed 3rd class. We descended the narrow gully, but instead of climbing the rock gullies, went down the snow field 150', and then back up the easy ramp leading to the upper slopes. This ramp is the same one used by the TT route. 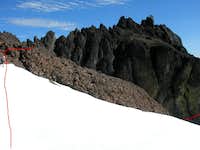 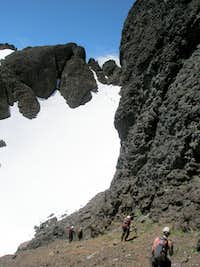 The easiest access to the rock east of the summit block is via a 3rd class chimney. Follow the rock around to the north side of the block, and a couple of 4th class moves lead to short scramble to tag the summit. We took advantage of our large group size to carry a 50m rope to descend the narrow gully, and a 30m rope to protect the 4th class moves on the block. It was nice to have both ropes. The narrow gully was melted out near the top, and the transition from rock to snow was tricky.

Our party of nine needed to use more care on the scree descents to minimize rockfall, but it was enjoyable knowing that every slip meant getting closer to home. We had to climb almost 600' on our return, and it was all on snow: the snowfield and gully leading up to the FT, the snow leading back up to the E-W ridge notch, and the snow leading back to the South Chute saddle.

The climb took us 12 hours camp-to-camp, and it was about five miles RT. We spent an extra hour using a rope in the narrow gully, and about 1.5 hrs on the summit block. Even cutting out some of that extra time, I think it would be very difficult for a group of nine to attempt this as a day trip--especially on a warm day like ours. The camp to summit elevation gain is about 3100', and we lost close to 600' on the way, making the total camp-summit-camp elevation gain about 4300'.

The scree probably made it feel more like 5000+', which may explain why this climb seems more strenuous than expected. When you factor in the ferry rides, 3.8 mi (900') on the road, and the difficult approach trail, even two days isn't generous, and a second night at the lake would be nice. We got back to our bikes around 8:30pm, and the downhill ride was pure joy!

After a Double Whopper with fries at the Poulsbo Burger King, I was ready to climb this one again (maybe in a couple of years after the Dosewallips road is repaired). We missed the 10:30 ferry, and had to wait until midnight. Even with all of the time to rehydrate while waiting for the ferry, I was still down eight pounds to 167 when I arrived home after 1:00am.