Mount Constance is one of the most impressive peaks visible from Puget Sound, along with The Brothers which are the two massifs seen from most of the Puget Sound communities. Mount Constance, at 7,743 feet, is the highest peak on the eastern edge of the Olympics and the third highest peak in the Olympic mountain range. The peak was named by George Davidson, surveyor, in honor of Constance Fauntleroy and the mountain is literally the big sister of some other peaks in the area. Some of her siblings include The Brothers (named for the Arthur and Edward Fauntleroy), and Mt. Ellinor.  Many residents along the eastern shores of the Puget Sound have assumed that the highest visible peak is Mount Olympus, but it is actually Mount Constance, for Mount Olympus is hidden on the western edge of the range.

The first ascent was in 1922 by R. Schellin and A.E. Smith. The rock on Mount Constance is comprised of pillow basalt (lava that erupted at the bottom of the ocean and cooled very rapidly) which tends to be quite poor quality for rock climbing and difficult to protect. Slings often prove more practical than wedge type protection. Some of the rock is quite solid however, you may think all of it is terrible and loose from the exasperating scree fields that must be negotiated when climbing this peak. Overall, the entire Olympic Range is renown for loose crumbly rock, but the climbers who frequent area have learned to cope with it. There is a small glacier on the north side of the peak with a bergschrund crossing in late summer. 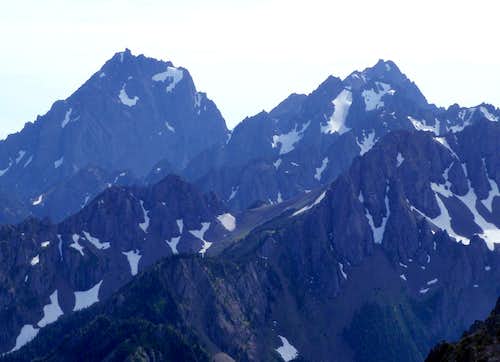 Constance and Inner Constance seen from the north

Mount Constance is one of the most challenging peaks in the Olympics.  If you don't believe it, look at the topo map.  Every side of the mountain is riddled with cliffs. Furthermore, part of the standard route is called "The Terrible Traverse", named for a precipitous snow cirque that must crossed above a huge cliff, where a fall would certainly be fatal.  The alternative to the Terrible Traverse is called "The Finger Traverse" and has become semi-famous among Olympic climbers for it's exposure.  It involves crossing a downsloping ledge above a cliff with your fingers jammed into the crack which runs along the top edge.  Even though it's only a class 3 ledge, some parties rope-up before crossing it.  For those who follow the standard route, this is the highlight of the climb.  Various routes on the mountain are numerous, ranging from Class 3 to mid-Class 5, and ascend every side of the mountain. Difficulty ranges from Grade 2 to Grade 4. 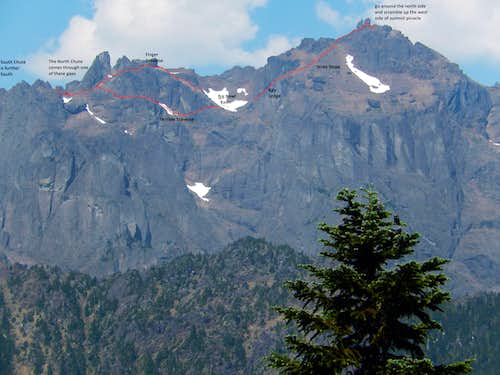 Most parties climbing Mount Constance will need to camp at Lake Constance.  The difficulty of the route will become apparent even before the lake is reached.  Have you ever seen a trail which is class 3?  It sounds like a paradox and yet this trail has many class 3 moves, some of which involve tree roots or branches.  A fall in the wrong spot could also end in sadness as the trail weaves through several cliffs.  During the times of snow, it may be better to ascend to the lake using the other side of the creek drainage.

This peak is a great vantage point for views of Puget Sound, the Cascades, and the remainder of the Olympics which surround the western skyline. Inner Constance, which is slightly lower and comprises the other side of Avalanche Canyon, is directly to the west of Mount Constance. Panoramic views of Mounts Mystery, Deception, Olympus, and the Anderson Massif can all be had from the pinnacle shaped summit.  On a clear day, even the Cascade volcanoes can be seen. 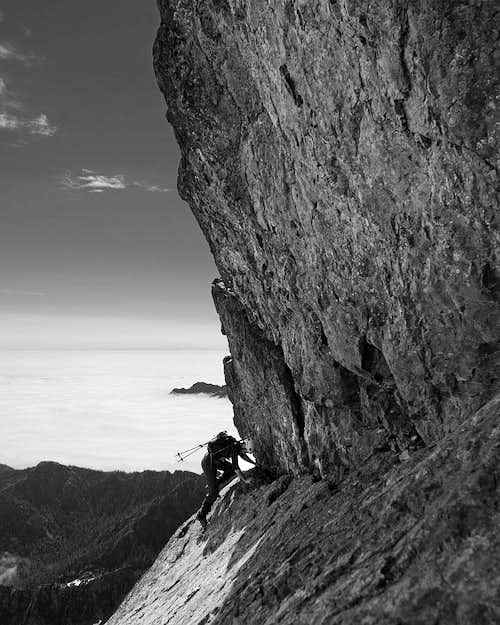 ROAD CLOSURE: The Dosewallips Road (#2610) is washed out 4 miles from the park boundary. A trail has been built around the washout and there is no planned repair date of the road. Feel free to call 360-565-3131 for more road information.

To access the peak from the south and west you want to approach via the Lake Constance Trail. From Seattle, either take the Edmonds-Kingston ferry across Puget Sound ($17 headed west and $8 headed east) or drive south on I-5 through Tacoma and take Highway 16 north across the Tacoma Narrows Bridge. You want to get to the Hood Canal Bridge to cross onto the Olympic Peninsula and eventually get to the small town on Brinnon located on the west side of Hood Canal along US Highway 101. On the south end of town, turn west off the Highway onto the Dosewallips Road. Follow this paved road for 7 miles to the end of the pavement, then an additional 3 miles on gravel until the washout and road closure at an elevation of 600 feet. Here the Dosewallips River has washed out a large section of the road leaving it closed indefinitely past mile 10. Cars can park along the roadside but be sure to leave room for others to get by. 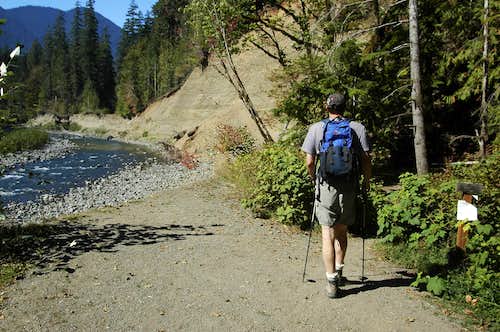 The washout on the Dosewallips Road

Take the Lake Constance Trail which starts at mile 14 on the road.  With the recent washout, it is necessary to either walk four miles of road each way or ride a bike (highly recommended). The road becomes overgrown in places where it's merely a single track but it's still in good condition and is never steep, so biking is fairly easy even with a pack on. Just after you cross the second wooden bridge look for a sign indicating the start of the Lake Constance Trail which is at 1,480 feet. You can stash bikes under this bridge or lock them to a tree. Begin hiking up the relentlessly steep trail through the 2009 burn area which transitions into healthier forest around 2,000 feet in elevation. The trail is never really difficult to follow but is very rocky and steep in a few spots.

At 3,100 feet exactly halfway up to the lake, the terrain flattens considerably offering a great place to rest or spend a night with the sound of the creek slowly flowing by. Beyond this flat section the trail becomes very steep following the creek for awhile, then leaving it to the west (left) side and climbing up a series of third class steps some of which are covered in dirt and have considerable exposure below. There are lots of good roots to grab onto though but use caution if carrying a heavy pack. Reach Lake Constance (Elev. 4,678 feet) after two very steep miles from the road where you can now take a nice break along the clear blue water and refill water. There are a few places to camp at the lake as well but camping here requires permits since it's within Olympic National Park. 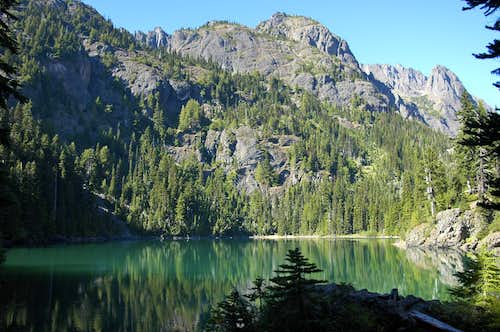 Camping is usually done at Lake Constance (See Red Tape section for permit questions). This lake is an emerald jewel ringed by trees and surrounded by imposing cliffs. The trail skirts the east end of the lake where a talus field comes right down to the water to campsites located on the north end. The lake lies cupped in a rocky bowl at the mouth of Avalanche Canyon. Do not be surprised to wake up in the morning to find a mountain goat right outside your tent! Another place you can camp is where the trail to Lake Constance crosses the flat section of the valley at 3,100 feet in elevation where the creek flows calmly right next to a flat spot with a good fire ring.

Probably the best time to climb would be from June to October. Early season in May and June there is still a considerable amount of snow in Avalanche Canyon which makes the travel easier since the scree is covered. Ascending the south chute is also much nicer at this time however the rock scrambling like the Finger Traverse and the summit area are much more difficult since snow and water is covering the rock and making it slick. In July, this snow is largely melted off the rocks and certainly by August, much of the snow in the entire area is gone leaving a vast sea of terrible loose scree where ascent follows the "one step up - two steps down" law.

Expect a considerable amount of snow on the upper mountain into June. Many of the routes involve chutes and traverses so avalanche assessment skills are vital when the mountain is covered with snow. To drive the point home, access to the main routes from Lake Constance takes you through Avalanche Canyon!

As the summer heat melts more and more snow, scree becomes a problem. It is not uncommon to have one's foot sink down a couple inches in this stuff. July usually sees increasing levels of frustration due to the abundance of scree taking the place of well consolidated snow.