Standing Rock inspires fear. It's on the front page of many books including Stephen Venables "First Ascent" book along with Layton Kor's "Beyond the Vertical." Layton Kor and Huntley lngalls put up the first ascent of this gem. Kor stated ,"Not because it's there, but because it might not be there much longer." This tower is one of the oddest out there. It stands 50 feet in diameter at the base and about 6 feet in diameter on the summit. Also include that it's overhanging and top heavy on the top and that it is almost 350 feet tall! This rock isn’t granite. It's more like mud rock sandstone. Kind of what you find in the Fisher Towers in Utah where you can take a hold off with little effort because it's so rotten. It was described as "layers of rye-krisp sandwiched between layers of kitty litter." Layton described it as his “scariest” climb. Considering he helped put up a new route on the Eiger North Face along with the Diamond in the winter and the Titan, it was no underestimate. It is an A4 climb meaning hard scary aid. Also include that by 1988 it had only seen 8 ascents. The first free ascent went in 1993 at 5.11. Impressive! Especially since nailing is illegal in Canyonlands, it has to be clean now. 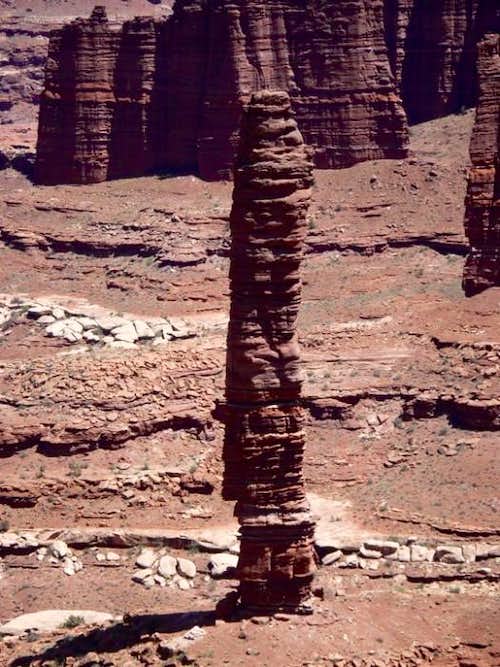 Towers don't get more phallic than this, and the summit is simply awe-inspiring. One of the best out there. Approach this tower with caution and be prepared for a battle. I would not say this tower is super safe but I will say if your a solid 5.10/+ trad climber, go for it. Highly recomended! Spicy with some moderate runouts on not so great rock. But hey it holds, just semi-sketch.

Get to Canyonlands Island in the Sky. Make sure to get a permit and etc. if your driving the road. Take the Shafer trail which turns into the White Rim road. This is all 4WD. Bring extra gas and water as it's a long haul. 30 or 40 miles takes you to Monument Basin. (about 4 hours) Keep your eye's open and Standing Rock is easily seen. At a point where you drive right next to the white rim on the road and the road starts turning south, that's your destination.

You have a few options. Monument Basin is not easily approached. 1) Find a safe spot to rappel north-northwest of Standing Rock and leave the rope for your return. Rap off your car, or build an anchor. 2) Take the old road. When the white rim road turns south, follow it for a second until you see tree trunks covering a old road. Park here and follow it until it's end. (1.5 miles) Then descend a gully. (loose 4rth class) Routefinding is needed for this gully. Memohive should be in front of you. Cut left and follow a faint trail until Standing Rock is in view. Find a way to get to the base with scrambling. (What we did) 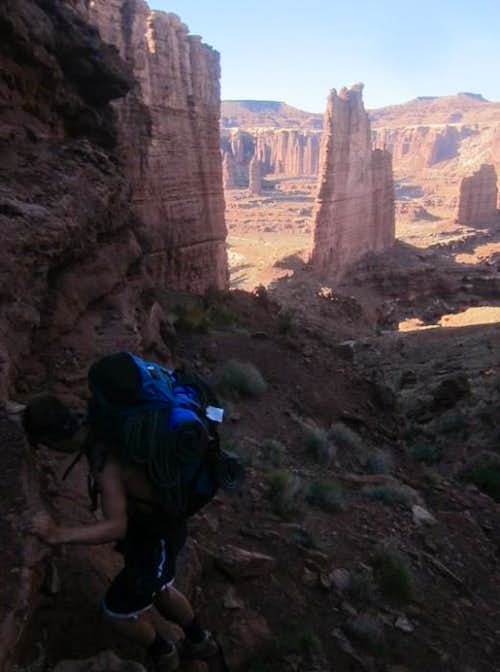 Descending the gully to Standing Rock

You need to get a permit to drive White Rim Road and you need a backpacking permit, assuming you are camping in Monument Basin. It's not expensive, not hard, so don't forget it as the rangers do patrol the road a ton! Permits can be picked up at Island in the Sky Visitor Center. Drivign permits for White Rim Road are free, and backpacking permits cost 15 dollars per party. Clean climbing techniques only, no nailing!

I would recomend a bivy at the base. It will most likely include one of the coolest nights you have spent on Earth. (Believe it or not, you are on Earth down there, not Mars!) You need a backpacking permit for this. There are campgrounds along White Rim Road, the closest to Monument Basin are White Crack and Gooseberry campgrounds. These must be reserved far in advance, and are almost always reserved in the high season. Expect 8 hours of driving round trip from Moab. Expect 4 hours round trip for the approach and up to 6 hours for the climb. Split it up into two days.

Only two routes are on Standing Rock. The Regular Route (5.11c) 3-4 pitches 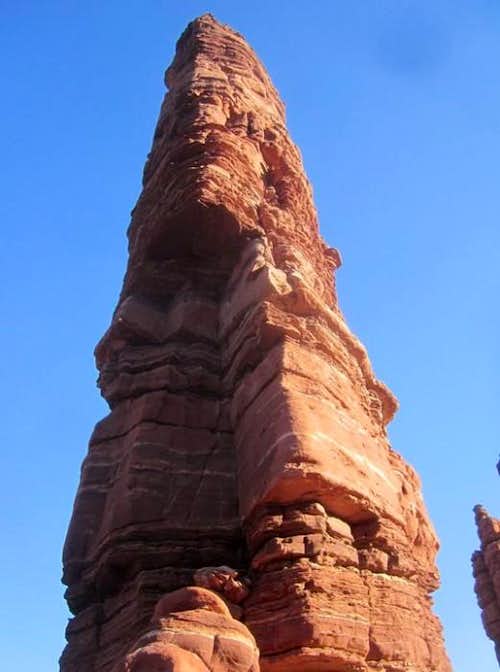 The route right in front

Unknown Route (A4) Likely unrepeated. Since you can't nail in the Canyonlands, it will likely never be done. It looks very scary. Standing Rock see's maybe one ascent a month. Only about 100 ascents have been made of it. 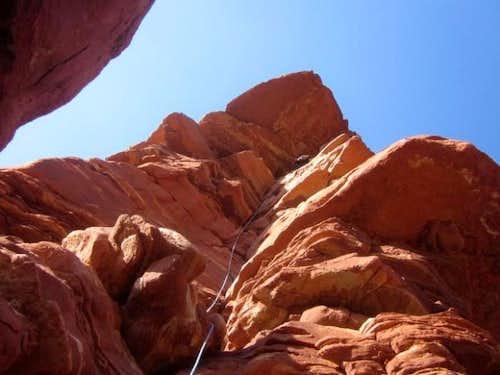 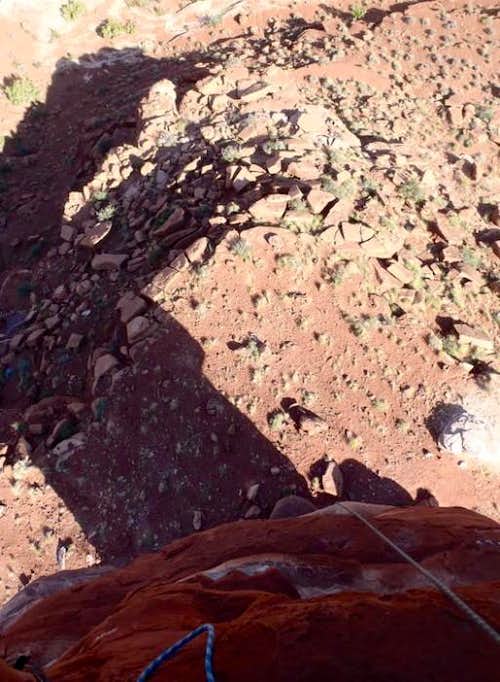 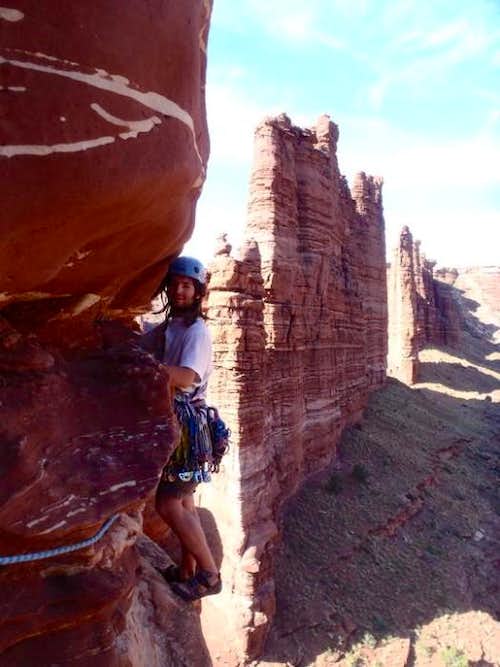 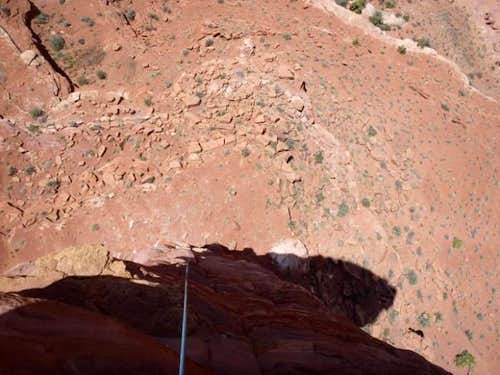 Looking down P2. (5.10d) A bit overhanging and solid for the grade. 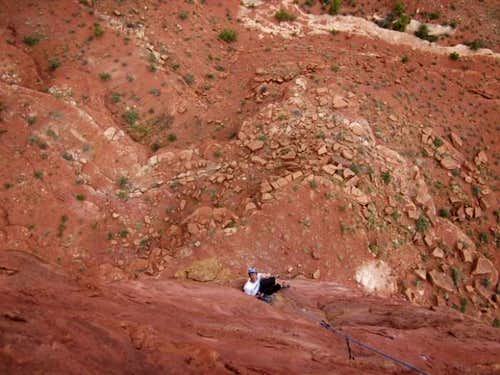 David putting away the crux of Standing Rock looking down at me belaying.