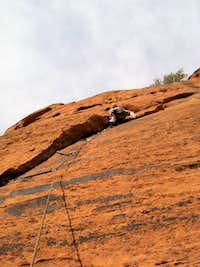 Handful of Crack, Fistful of Pockets, 5.9
Snow Canyon is divided up into five separate climbing areas: Hackberry Wash, Island in the Sky, Balkan Dome, the Enclosure and West Canyon. I have climbed in all five and Island in the Sky has by far the most routes (64+) and is further divided up into nine distinct walls with multiple routes ranging from 5.6-5.12b: Breakfast Nook, Circus Wall, Aftershock Wall, The War Zone, The Dip Area, The Doghouse, The Sand Dunes Area, Indian Wall and the South End. 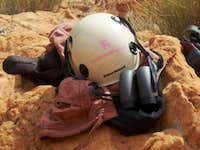 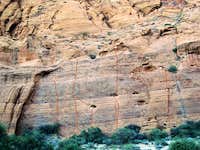 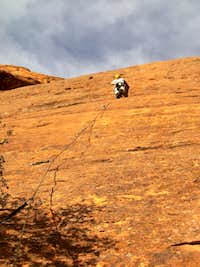 Raindance, 5.10a
There are five published routes on Indian Wall which itself is a huge arch carved out at the south end of Island in the Sky just right (south) of the The Sand Dunes Area wall (across the road from, you guessed it, the sand dunes) . The walls in Snow Canyon are comprised of soft sandstone and therefore climbing the same grades in Snow Canyon compared to granite or limestone slabs or even hardened sandstone (Zion) makes the grading somewhat stiffer by consensus. That being said, the routes I have climbed on Indian Wall I thought were on target for their grade. Visser and Kindred had their hands in the majority of them.

The Indian Wall routes are all sport except for “Handful of Crack, Fistful of Pockets” which is a climb I recommend. It is a flake/crack to the right of the arch which the other routes actually lie within. Snow Canyon is full of Red Navajo sandstone, capped by an overlay of black lava rock. This process creates significant, but sometimes delicate climbing holds called desert varnish. Wet or not, some varnish holds do give way from time to time. I have taken a 25’ whipper when one of these varnishes failed on a run out route on the Sand Dunes Area wall. I highly advise staying on the well climbed existing routes of Snow Canyon. If they are dirty (thus unattended), I can assure you they are probably not worth it. The published routes on Indian Wall are popular in comparison to other routes in Snow Canyon, but again, this is no California. You more than likely will have them to yourself, weekend or not.

Access for climbing simply cannot get easier (ok it can). Park at the Jenny’s Canyon trailhead (trail often closed beyond Island in the Sky) pullout on the right side of the road after you enter the park. Dip down to the wash from the trail and angle left towards the large arch. Snow Canyon is exceptional in that most of the crowd is climbing nearby at Zion and Red Rocks leaving it very quiet. Normally we are the only party climbing in the park and there are over 200 routes. One could camp and climb here for a week and not get bored. It has a significant state park campground. The wildlife is a little different than what I am used to in Canada. The most likely suspects are Gila monsters, desert tortoises, scorpions and the Mojave rattlesnakes all of which I have seen up close. Please avoid walking on the microbiological soil. It is the dark crust that holds the surface layers together and prevents erosion. It takes centuries to reoccur. This whole ecosystem is much more delicate than most. 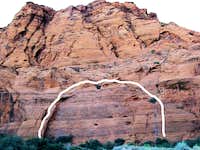 1st Pitch/40’- Scramble up to the base of the large flake. Sew up the crack with gear as you combine layback moves with facial features and easily protect the pitch with medium-large cams. The upper part of the pitch is easier than the lower as the crack starts to narrow. You arrive at a bolted station with a solid stance on top of the flake.
2nd Pitch/30’- I normally rap the first pitch, let anyone who wants to top rope it give it a go and then run back for the 2nd short pitch without the rope drag and then rap to the ground. Then you can top rope the 1st and 2nd pitches together if you want at that point and still reach the ground with a 60m rope. Up and to your left is an unprotectable slab with two bolts leading to a two bolt anchor above. Traverse left, make a mantle move to reach the first bolt and then skirt sparse slab directly above to the next bolt (long reach on sandy and verticle slab terrain, not my favorite pitch at Snow Canyon), a tad run out for a sport pitch. I rapped the route with a single 60m, but you can walk off north supposedly. (photos)


I highly recommend this route. Start at the far left inside the arch above a scrub oak. This is a pure friction long sport pitch past eight bolts spread out over 85’. Definitely use a 60m rope for your rap. Unlike the other routes, it ends on the wall below the arch, thus you have to rap the route. (photos)

Snow Canyon State Park hours are 6:00am to 10:00pm. A day visit pass is $5.00 and camping spots are $15.00 to $18.00 (2007). Wildlife seasonal closures as of 2007 include all Hackberry Wash routes from March 31 to June 1 and all West Canyon routes from February 1 to June 1. The sandstone rock at Snow Canyon State Park is not as solid as the lava influenced Black Rocks. As with most of the climbing in and around St. George, you should avoid climbing for at least 24 hours after any rain.

The climbing is good all year round with the exception of daytime during the summer months. If you are climbing anywhere in southwestern Utah during the summer months, you more than likely better get up early and finish your climb early. The walls get brutally hot. That being said, Snow Canyon is at a higher elevation than other immediate Saint George climbing areas (Utah Hills being the exception). In the dead of winter, the warmer climbing is limited to Island in the Sky. Indian Wall receives an abundant supply of afternoon sun during the winter months.