This route is probably the most popular walk in the Brecon Beacons, it's easy access making it an obvious choice for visitors to the area. A short but enjoyable route, it visits three summits, the first of which is Pen-y-Fan, the highest mountain in the range, and the highest mountain in southern Britain. The panorama from the summit, as would be expected, is as extensive as it is beautiful. On especially clear days. it is even possible to pick out the Somerset Hills and the coast of Devon. The summit carries an ancient burial cairn surmounted by a trig pillar.

The second peak of the route is Corn Du, and almost identical summit, which could be considered Pen y Fan's twin. The peak is mentiond by Geraldus Cambrensis (1188), but refers to it as Cadair Arthur "so called from the two peaks rising up in the form of a chair".

The third and final peak visited by the route is Y Gyrn, a flat, rounded, grassy hill which may be considered to be a bit of an anticlimax when compared to the previous two mountains. On the other hand, it does clock up your summit tally, and is on the way back to the start anyway.

The route starts at car park on the far side of the forestry plantation from the Storey Arms (SN 983203), which is on the A470 in-between Brecon in the north and Merthyr Tudful in the south. If coming from the south i.e. if you’re coming along the M4, take Junction 32 (ST 142 816) near Cardiff and head north along the duel carriageway, the A470, to Merthyr Tudful. At Merthyr there is a roundabout which has four exits, take the second exit and stay on the A470, no longer a duel carriageway (SO 028 077), for around 10 miles to the car park which is located on the opposite side of the Storey Arms.

If you are parking in this area make sure you lock your car and hide all valuables. Sometimes thieves come up from Merthyr Tudful and other nearby large towns and prey on the easy pickings that are often left in the car park.

To the south of the car park toilet block take the path between the conifers, pass through the gate and cross the stream, (Nant Blaen Taf Fawr). Continue along the path, passing the National Trust plaque which commemorates the gift of the Brecon Beacons to the National Trust by the Eagle Star Insurance company in 1965. Cross the mountainside to the pass, Bwlch Duwynt, where the landscape to the east is revealed. Then head north-east, keeping on the level path. After about 600 metres you will arrive at a junction , continue forward to Pen-Y-Fan, the first summit. Alternatively, you could take the left hand path and visit Corn Du first. Return along the ridge to visit Corn Du's summit. Drop down north west and follow the path along the scarp edge. After about 500 metres, bear left at a fork in the path, pass the Tommy Jones Obelisk and continue down slope. Cross a junction to a fence, turn left and follow the fence to the third and final summit, Y Gyrn. Descend easily along a path to the Storey Arms and follow the road back to your starting point.

Just a good pair of boots, waterproofs and some lunch. If walking in winter make sure you also carry an ice axe and crampons.

Cicerone Guide: The Mountains of England and Wales: Volume 1 Wales by John and Anne Nuttall 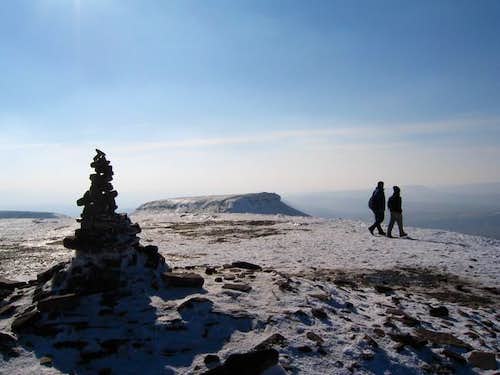 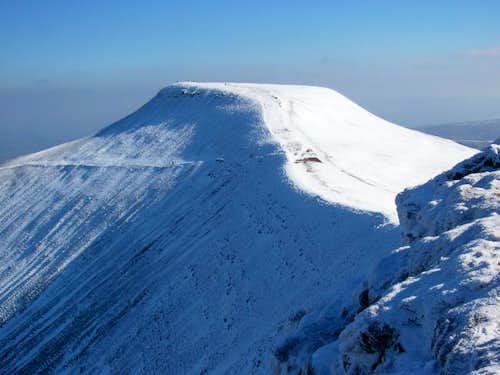