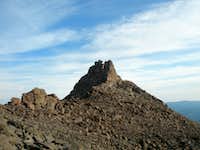 Storm Peak as seen from the Keyhole
Technically speaking, Storm Peak isn’t even a ranked point. By Colorado standards, it falls well below the minimum 300’ prominence and 1 mile isolation rule (generally accepted and agreed upon perimeters). Even standing at the Boulderfield, a flat, rocky plateau that separates Lady Washington, Longs Peak and Storm Peak, the summit only rises an additional 570’ above to the west. What makes Storm Peak a good destination is that it serves as an excellent end-of-the-day scramble after doing say, Longs Peak or when combined with Mt. Lady Washington.

Longs Peak is the center (nexus) of four radiating ridges. The southwest ridge terminates at the equally lofty Mt. Meeker (a worthy scramble in its own right) and the southwest ends at Pagoda Peak. Lady Washington brings up the northeast and Strom Peak resides on the northwest ridge. If someone would come up and tell me that Storm Peak isn’t a ‘real’ summit, that it’s nothing more than a bump along the ridge extending from the Keyhole, honestly, it would be hard for me to argue it. Though, it is a named point and recognized by RMNP and the general consensus is that most people treat it as a separate peak…hence this SP page.

Storm Peak is an easy mountain. Considering a good, well-maintained class-1 trail exists to within a quarter mile of its summit followed by an easy class-2 scramble, Storm Peak is what we like to call, “low hanging fruit.” The mountain and nearby Storm Pass were probably named by Enos Mills because of the tendency of storms and inclement weather to gather in the environs. It lies .74 miles north of Longs Peak within Larimer County. It is an unranked summit (186’ of prominence) in the Longs Peak Quadrangle and is under the jurisdiction of Rocky Mountain National Park. 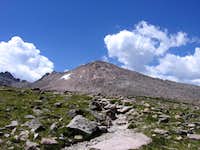 Hiking: The turnoff for Estes Cone/Eugina Mine is .5 miles from the trailhead. Battle Mountain group camping site is 2.9 miles from the trailhead and Chasm Junction is 3.1 miles.
The Boulderfield is about 6 miles. Leave the trail at the Boulderfield and rock-hop/scramble due west up the gentle slopes to the summit.
Half Peak, another unranked RMNP summit is only another .5 mile north of Storm for extra credit!

Since Storm Peak is only a class-2 scramble, expect to take the usual barrage of hiking equipment (poles, boots, long-sleeve shirt, hat etc.). I will mention however, weather can change rapidly at the Boulderfield and Storm Peak due to the topography of Longs Peak. So be in preperation for storms, rain or sudden blizzards.
I've stopped counting the number of times I've been caught in white out conditions from either sudden snow squalls or dense cloud.
Always be prepared when venturing into the alpine!! 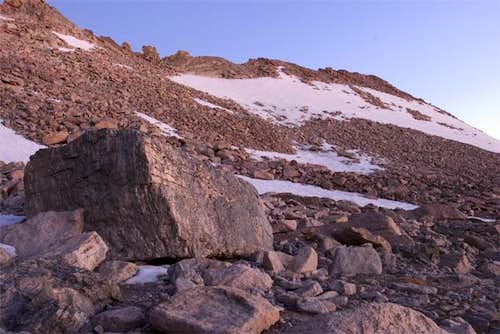 Eastern Slope of Storm Peak
Because Storm Peak shares the same trail and campgrounds as Longs, expect a lot of people when using the following suggestions/areas (as a rule).
If camping at a NPS regulated site, bear cannisters are now required as of two-three years ago.

Since Storm Peak lies within the jurisdiction of the National Park Service, all the normal, ticker-tape rules and regulations will apply. Make sure camping is done in designated areas, no fires outside of preexisting fire rings and pets & firearms are not allowed. Wandering off desginated trails is frowned upon.
The NPS (ROMO) has no problem in doleing out citations to people.

Also, bear cannisters are now mandated during summer when camping until mid-September. They will check for these and again, dole out fines for not having them. FYI. 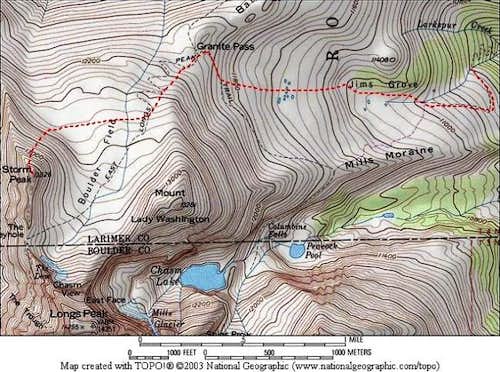 Hey there, I have a hard time thinking of Mount Meeker as a sub-peak to anything, Longs or otherwise: Storm Peak is one of the three major sub peaks (alongwith Mount Lady Washington and Mount Meeker) Perhaps you meant to include Battle Mountain in this list, instead of Meeker? Also, as a courtesy, please see spelling correction in bold. Cheers! Sarah