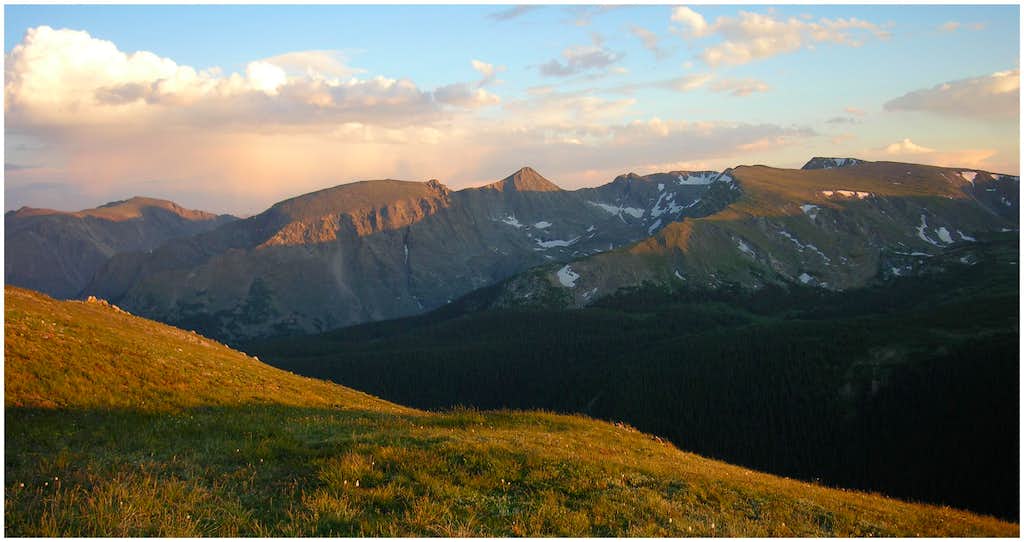 Terra Tomah & Mount Julian-Gorge Lakes Basin
For those visitors that miss out on the great Glacier Gorge area of Rocky Mountain National Park, most will at least drive the popular Trail Ridge Road to view the dramatic mountain splendor along Colorado’s famous Continental Divide. Crossing Rocky Mountain National Park from east to west and topping out at 12,183-ft, the spectacular Trail Ridge Road provides its visitors with an interesting view into a delicate, and scenic alpine environment that mirrors arctic regions around the world. During the summer months, millions of yearly park visitors will get their first dose of the windy alpine zone, profuse wildflowers, and thousands of elk that inhabit this high country. However, when these park vistitors reflect back on their drive of Trail Ridge Road, the majority of photos will not be of elk, flowers or alpine tundra, the photo imagery will show a comprehensive view of Longs Peak and the surrounding symmetry of mountainous terrain. And…even if these visitors don’t realize it, they probably have a photo of Terra Tomah Mountain and its surrounding terrain as well. 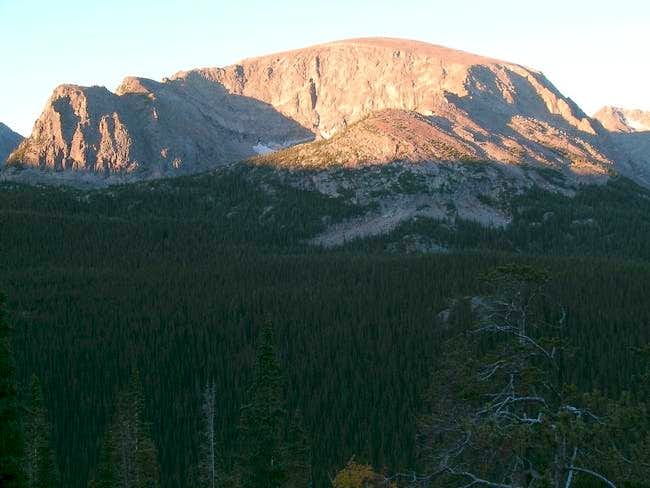 From Forest Canyon Overlook off of Trail Ridge Road, eyes are graced with a view of the abyss-like and tree-laden Forest Canyon- a distant 2000-ft feet below, and a stellar view across the canyon to the peaks that line Continental Divide. Looking straight across the canyon, you can’t miss Terra Tomah Mountain (12,718-ft); it’s easy to spot, and most likely the centerpiece of many photos from this overlook. The name Terra Tomah, is not a Native American name like most named peaks in Rocky Mountain National Park. The official park naming board has naming rules that must be followed. It prefers imaginative names that are unique and suggest local history, folklore, or incident, using Indian or other ethnic names appropriate to the area, which explains why Terra Tomah was named after an old Ivy League college-drinking chant “Terr-ah-toh-mah.” Source

Sporting a huge, spherical summit plateau that is 90% encompassed with sometimes sheer vertical walls, Terra Tomah Mountain is pure eye-candy. It is a massive mountain as well, actually not located on the Continental Divide but about 2 miles east of the divide with the higher Mount Julian (12,928-ft) residing in-between.

Terra Tomah is completely surrounded by arguably the most pristine land in the park or maybe the entire Front Range. Abyss-like, unfrequented gorges like the Hayden Gorge to the southeast and Gorge Lakes to the northwest vigorously protect Terra Tomah’s conical summit plateau. Let’s not forget that Forest Canyon shields any potential visitors from the northeast. So, the only feasible, remaining entrance to the summit plateau would be from the west via a very long, and laborious approach from either Milner Pass or a longer approach from the west side of the divide up Tonahutu Creek and Haynach Lakes. From Milner Pass, expect an airy Continental Divide traverse that keeps you above 12,000-ft for up to 12-14 hours, exposed to incoming thunderstorms with escape routes that leave you in a world of doubt. From west of the divide, expect a 9 or 10-mile approach through lush forests, verdant valleys, wetlands and meadows.

Unless a strong high-pressure weather system has set in over Colorado, I wouldn’t attempt the Milner Pass Route, especially in July or August. It is my opinion that the best route to Terra Tomah’s summit is its East Ridge Route via Forest Canyon from Forest Canyon Overlook. The good news is, the East Ridge Route is only 5.4 miles round trip. The bad news is, it involves close to 5000-ft of total vertical gain in some of the most complex, shapeless terrain you have ever visited. 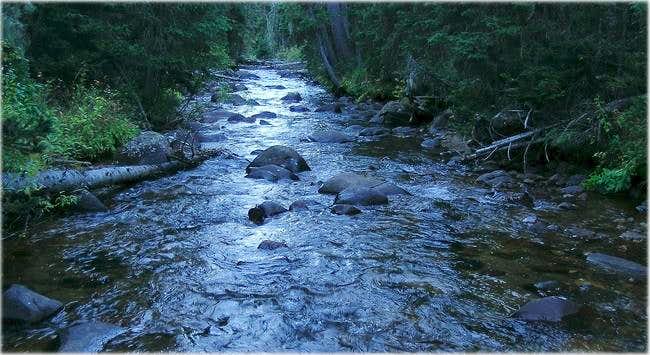 Two thousand feet below your trailhead, the Forest Canyon floor is a featureless and dark place, loaded with downfall. It is a lonely, cold and wet place as well, with moss and lichen streaming from one tree to the next. The day’s sunlight struggles every 24 hours to reach the canyon floor here, and only peak hours of the day between 11:00 am and 2:00 pm generate enough light to pierce the thick canopy of moss and tree cover. In addition, this is a real bad place to get disoriented or lost; Search and Rescue will laugh when they get a call that someone is missing in Forest Canyon. There are no trails in Forest Canyon, and locating landmarks is almost impossible. In my experience, no other place has felt so distant and so far away. Please do not solo this route.

Forest Canyon isn't a peak, but it has some of the most spectacular hiking in RMNP. You will not find more unspoiled scenery anywhere in the park, and it is a feasible, though by no means easy, approach to a number of peaks. Although it would not be my first choice for an ascent, it is an excellent choice for making a peak trip into a circle trip-- for instance, you could climb Ida, Chief Cheley, Stones, or any of the bordering peaks using a more conventional route for the ascent, and then you could descend and return via Forest Canyon, using any of the exits described below. Just remember-- leave yourself plenty of extra time for Forest Canyon, because it can be extremely slow going. Forest Canyon itself makes an excellent hike-- in which case, my choice would be to travel from Fern Lake to Milner Pass; the lower canyon is the most difficult part, and I'd rather deal with that when I'm fresh. Keep in mind that few people venture into the canyon, so few people are prepared to pull you out of there if you get lost. Keep in mind also that as long as you stay near the Big Thompson, you won't get too badly lost.

The lower Forest Canyon, between Guardian Rock and Forest Lake, is also extremely rough going, with dense forest cover. You will find some game trails along the north side of the Big Thompson, and these can make the going quicker. Some of the largest and oldest trees I have ever seen in the park are in the lower canyon. Older maps show a location in the lower canyon called "Raspberry Park;" however, I have not been able to find this. Make sure you watch for landmarks, such as Lost Brook and Hayden Creek, so that you do not get lost.

Hayden Creek joins the Big Thompson at almost the same spot as a stream coming off Trail Ridge; it is possible to follow this stream up to Trail Ridge and come out at a parking area along the road. It is also possible to ascend Hayden Gorge, though like Spruce Canyon, this is extremely rough going. Hayden Gorge does work as a descent from the ridge just above Hayden Lake; like Spruce Canyon, there are a lot of rock outcrops and small cliffs in the forest, so give yourself plenty of time.

Forest Lake is one of the most scenic lakes in the park; it's a little bit off the Gorge Lakes drainage, but it is worth the detour. You can ascend the Gorge Lakes drainage to the saddle between Chief Cheley and Sprague Mountain, though you may need ice equipment to get all the way up. Or, you can climb the ridgeline above Love Lake, and you will be on the flank of Mount Ida.

If you stay in Forest Canyon, you can ascend to Rock Cut or Iceberg Pass; in either of these routes, stay along the edge of the couloir-- the bottom will be choked with debris, but the sides sometimes have passable game trails.

Around this point, Forest Canyon begins to open up, and the bottom consists of extremely wet meadows. Stay along the forest edge unless you are prepared for a lot of muck! You can follow the meadows and drainages trending southwest, towards many small, unnamed lakes if you'd like to be above treeline (the Mount Ida trail is just over the ridgeline above these lakes), or you can exit the canyon at Forest Canyon Pass. The pass itself isn't quite at treeline, and it can be extremely wet and marshy. These are the headwaters of the Big Thompson.

Forest Canyon is a wild and unvisited place, and it is something to consider as an addition to a peak hike. Just remember to budget about twice as much time as you think you need, tell people where you are going, and bring a good map, compass, or GPS unit.