Temple Mountain is one of the San Rafael Swell's spectacular monarchs which is often viewed, but sees relatively little ascents. Many pass the mountain due to its close proximity to the rugged San Rafael Reef, Goblin Valley State Park, and Little Wildhorse Canyon to the south. The mountain has a rich mining history, coupled with interesting geological features.

Temple Mountain offers a very challenging and spectacular climb and scramble to the summit which will turn away the wary. In many areas in the United States, Temple Mountain might be considered a difficult summit, but by San Rafael Swell standards it is fairly easy.

The San Rafael Swell is a huge anticline, measuring 80X40 miles (125X65 kms). Most of the land is arid or desert, but a few areas in higher elevation support some sub-alpine vegetation. The rock layers are all tilted and many rings of cliffs surround the Swell, all radiating around the center of the Swell. The outer most cliff bands are known as the San Rafael Reef, and it contains many jagged fins, towers, and peaks. The scenery is fantastic, and contains towering mesas and mountains, thin rock pinnacles, slot canyons, larger deep canyons, huge rock walls, arches, slickrock, etc. etc. The Swell offers everything from gentle hiking to extremely difficult peak climbing.

The San Rafael Swell has something for everyone (except for maybe glacier enthusiast!). Hikers will enjoy the gentle canyon hikes, and what few trails there are. Backpackers will find years worth of exploring to do. Canyoneers will enjoy the challenging slot canyons. Climbers can find peaks, towers, and mountains of all grades of difficulty, including some of which remain unclimbed at the present day. 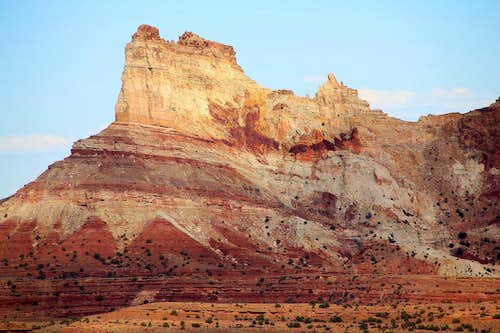 A look at the northern portion from the west.

What's Behind the Name?

Temple Mountain was named by early settlers to the area for its striking resemblance to the Mormon temple in Manti (though one source I’ve read says the Salt Lake Temple). You can really see the semblance when traveling to Temple Mountain from the northwest. 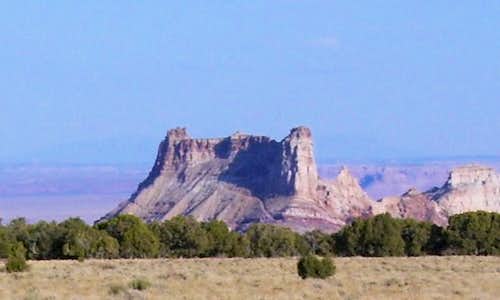 Temple Mountain from the NW.

Compare to the Wiki Photo of the Building.

It is interesting to point out that there seems to be some confusion as to which point the true summit of Temple Mountain is. I climbed the Northwest summit which is where the benchmark and marked elevation (6773 feet) is on the map. There are several old signatures around this summit as well. Wasatchvoayage climbed the NE summit and found it to be marked with a cairn. Both summits appear to be about the same height, though it is worth noting that Wasatchvoyage’s GPS reading was 6798 feet on the NE summit and when looking from the summit in photographs, it appears that the Northeast Summit is probably higher. 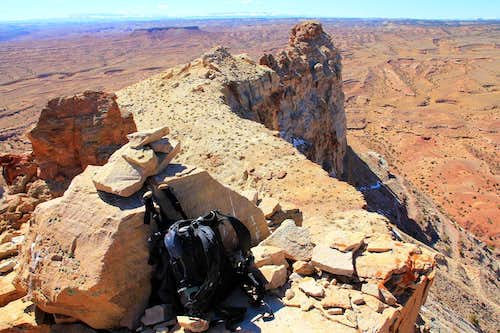 A view looking south west from the northeast east summit. The northwest summit is upper right. 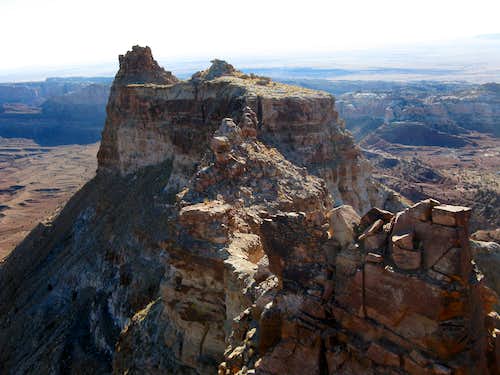 SaraThompson's cool shot from near the west summit area looking at the east summit.

The main paved road offering access to this peak is Utah's highway 24. The mountain is located roughly halfway between I-70, and Hanksville, Utah. From exit 149 on I-70, head south and drive 22 miles to Temple Junction, which will be sign posted for Goblin Valley State Park. The road, ironically, is called Temple Mountain Road on some maps. From Temple Junction, drive west on a Temple Mountain Road, (paved for much of the way) for 7 miles.

Towards the last mile or so you will be driving through the San Rafael Reef. At mile 7 you will be just inside the reef and Temple Mountain will dominate the horizon to the north. At this location there area several lavatories and parking locations available. The perimeter here is fenced off to the north areas with an older log style fence. This will be the start of the route for those without access to a four wheel drive vehicle or mountain bike.

For those out there with four wheel drive/high clearance vehicles and/or mountain bikes, you may be able to reach the base of the mountain's east side where the scrambling route begins, all depending on your driving ability. The BLM has designated the access road on this portion of the mountain for ATV's. The whole section of road from the main parking area to the end of the four wheel drive portion is just over 1.5 miles.

The road is fairly rough on some portions, mainly about just under 1 mile in from the parking area mentioned above. Rock/mud slides have narrowed portions of this section of road recently. If you insist on driving this portion do it at your own risk to you and and your vehicle. See the map below for more information to the base of the mountain. 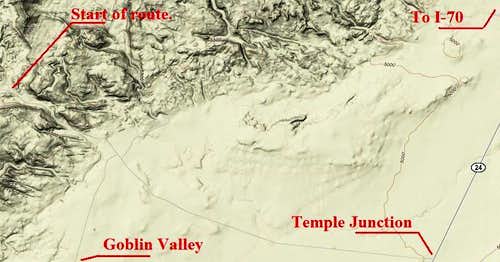 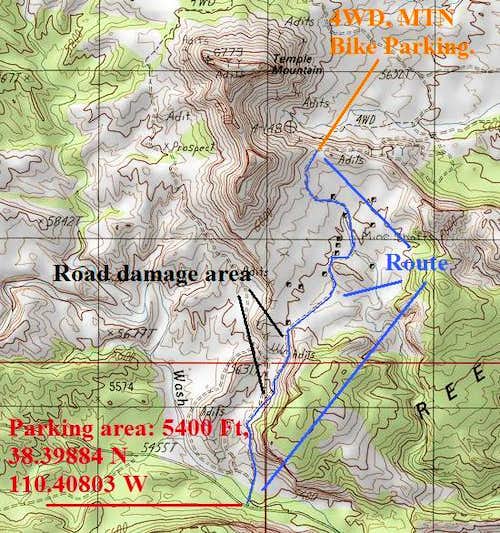 The Southeast Face/South Ridge is the easiest route on Temple Mountain, but there are other routes on the mountain as well.

All other routes on Temple Mountain should be considered to be technical in nature. The rock seems even looser here than in some other parts of the San Rafael Swell.

This might be considered the normal route on this seldom climbed mountain. It’s isn’t that difficult of a climb, but it is loose and potentially dangerous. Although we did the climb without a rope, others have been turned away at the crux pitch as well as the pitch before it. In some places on the route, a rope could actually hinder safety because of the loose scree, but it is highly recommended that both a rope and a standard climbing rack always be taken.

Opinions vary, but various sources have rated this climb as 5.0 to 5.6 for the crux pitch. Either way, this is not an ascent to be taken lightly. See the route page for details. 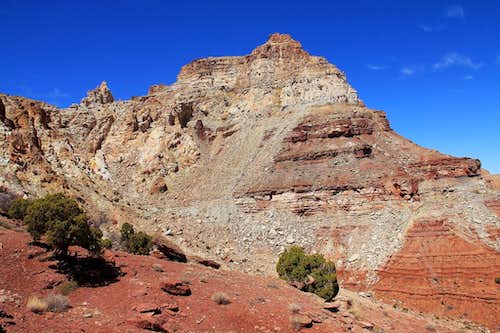 This photo was taken on the approach to the class 3 scrambling portion up the chutes seen, center left, to the saddle. Low class 5 with some exposure was needed to reach the main summit ridge connecting the west and east summits.

There is at least one route on the north face of the mountain. An old (probably several decades old) rope hangs (or did hang) off the north side, but shouldn't be trusted. You can reach the steep headwall by following old (and incredibly steep) mining roads up to the base of the headwall. Reaching the summit from this side will involve some severe exposure, so beware.

Mystery Slings Variation is 5.10b; 3 pitches; 340 feet and on the south side of the mountain.

Little Erma is 5.9; 2 pitches; 120 feet and climbs a separate tower just south of the mountain.

Temple Mountain is just outside of the San Rafael Reef Wilderness Study area and is managed by the Bureau of Land Management.

One of the main concerns here is over-use and abuse of the area by ATV owners who travel off designated routes designated by the BLM. If taking the route from the main parking area in on foot or mountain bike watch for atv's mainly around corners where they may not see you until it is too late.

Abandoned mine shafts, equipment and dwellings

The entire circumference of Temple Mountain has old mine shafts, equipment, and old dwellings scattered everywhere. For the most part the more dangerous shafts, be it horizontal or vertical, have been gated or fenced off. While most of us may find this interesting, children present could very easily wander off into one of these. A lot of the older mining equipment and dwellings is rusted and rotten, which could pose a threat for those climbing around or on it. 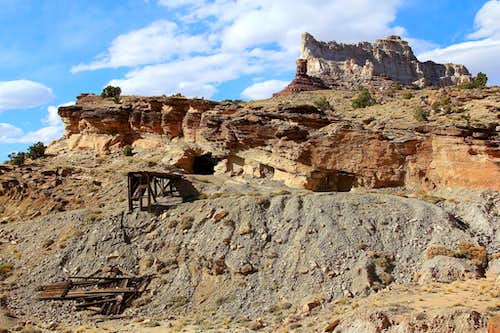 An old gated off mine located near the parking area.

Goblin Valley State Park features a developed campground, several miles south of Temple Mountain. Plan on reserving this one in advance! Info on this campground:

Utah.com link for the Goblin Valley area is here.

This area is fairly open with many options for at large camping. There are several locations along the access road to camp for those wanting to hit it up out of the car. There are fire rings in interesting locations along the four wheel drive access road. If you want some solitude an overnight venture off into one of the narrow washes or canyons away from the road will do the trick. There is no private land for miles and miles around in this area.

Spring and Fall are the best times to climb here. Summers are brutal. Winter can be a good season to climb if the route isn't covered with snow. The area receives fairly light snowfall and the route is exposed to much sun, so during dry spells, this can be a pleasant season.

The clay soils around the mountain can be very slippery when saturated, so a little rain can make access difficult.

This is a land of temperature extremes, but of little rain or snow. Temperatures have ranged -35F (-37) to 114F (46C) at Hanksville. Sunny weather predominates and it only rains a few times a year, but when it does rain, it can really pour! 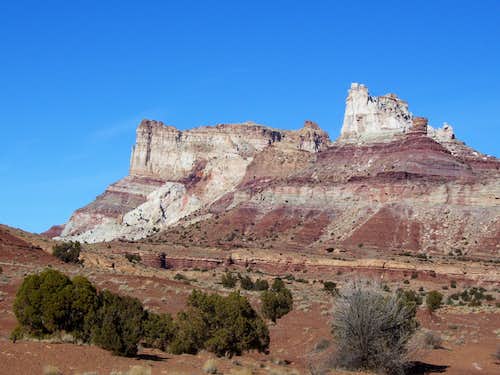 Temple Mountain in the San Rafael Swell as viewed from the south as seen on a sunny spring day.

The surrounding desert and approach will be hotter than the summit area, so take this into account if climbing on a warm day.

Temple Mountain's geology is what has drawn so many to pick at its flanks over the years for uranium ore. The upper portion, the exact composition of the San Rafael Reef area right next door, it that of Navajo Sandstone. This bed of rock is very thick in some places more than 500 feet thick. Under the Navajo is a thin bed of a formation named Kayenta, which overlays another large thick layer of Wingate Sandstone. Under the Wingate Sandstone, is what all of the miners were after over the years.

The Chinle Formation is a moderately thick layer of strata that contains the Mossback Member. The Mossback contains the uranium ore where most all of the mines have been horizontally placed around the mountain. The Chinle Formation is late Triassic in age, 150 to 200 million years old. The Mossback composition, a varying color of gray to yellow to red, is mainly composed of claystone, siltstone and fine grained sandstone which was deposited in smaller lakes and river systems.

In many locations throughout the Swell area petrified wood has been found in the formation. The uranium itself is located in these petrified logs and vegetal heaps, some piles of which can be seen around some of the mines surrounding Temple Mountain.

The first discovery of Uranium ore in the San Rafael Swell are dates all the way back to the turn of the 20th Century by sheepherders and ranchers. Uranium claims were staked on Temple Mountain as early at 1898. The bulk of the mining in the Temple Mountain area was done during 1948 to 1956, due to the Federal Governments un-quenchable thirst for Uranium ore for the development of it's Atomic Energy Commission. There were so many people around Temple Mountain that a small town nearly formed of house trailers and prefabricated homes. A small store, cafe and pool hall was opened at Temple Junction on Highway 24. In 1961 the small community moved out and closed the Temple Junction services completely. They left a lot behind however. 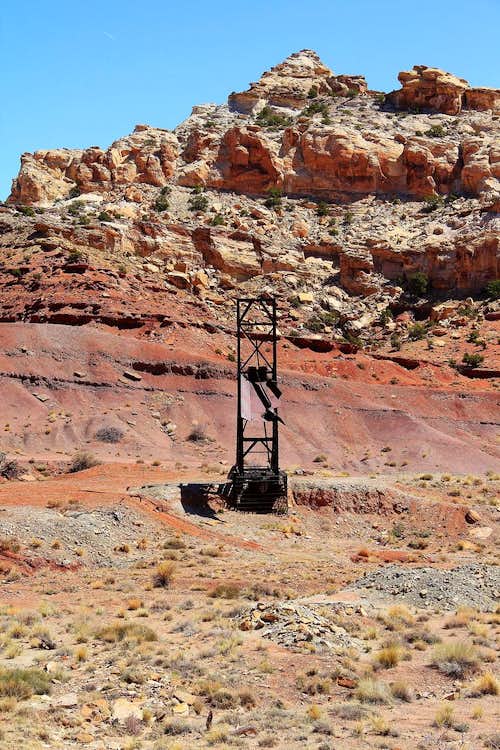 An old mine structure located along the east flank of Temple Mountain. 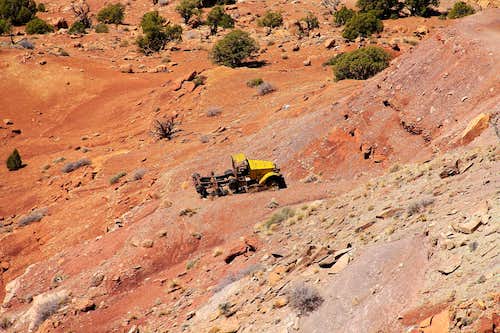 An old half track truck, a reminder of the past on the west side of the mountain.

The most current documentation of this climb!

It was a SCARY solo. Be careful! https://youtu.be/rKh_zQpxwLs