The North Face of Gothics Mountain

On Friday, the 12th of February, Marian and I loaded up the car and headed into Adirondack National Park. We had been planning to climb the North Face of Gothics Mountain for a couple of months and were excited to finally be on the road. Gothics is one of the few quality backcountry alpine routes in the Adirondacks. It involves a 6 or 7 mile approach, and then a 1000 foot climb up an ice slab, when conditions are good. We were hoping for these conditions as we drove towards New York.

Our first obstacle was the border. Marian was not only in Canada on a work permit, which always sketches out American Border Guards, but was also in possession of an expired American Tourist Permit. So, we were hauled into customs to sort it out. About 45 minutes later, we were driving away from the border, finally. It only took so long because of our overly chatty border guard. Our next stop was a grocery store to pick up supplies – AKA cookies, steak, cookies, peanut butter, cookies and more cookies. We then stopped at an A&W and gas station to refuel ourselves and the car. It was a short drive to the Adirondacks, only 4 hours, so we took our time. In Saranac Lake, we stopped at a liquor store and bought some celebratory inebriants for after the climb. Then, somehow took a wrong turn and ended up back in Saranac Lake half an hour later. We still don’t know what happened, but imagine it has something to do with a worm hole and parallel universe. Eventually, we pulled into the trailhead parking lot and prepared for our move into the backcountry. 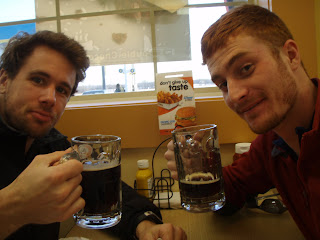 Figure 1: Refueling along the way.


We sorted gear, split up the food, shoved it all in our packs and took off down the trail. It was around 7PM when we started our approach. We planned on spending the night at the Ore Bed Lean-to. The Adirondacks is peppered with little three walled huts that, allegedly, sleep up to 8 people. Getting to the lean-to was very easy. The approach was short, the terrain was relatively flat and the trail was well beaten. The only thing that slowed me down was my knee, which was tight from the car ride. Eventually, we arrived at the hut, only to find it already inhabited. James, an economist from DC, was bundled up in the corner trying to stay warm. We trundled into the hut and woke him up. He found it strange that we had beer with us. We found it strange that he was entirely dressed in brand new down clothing that had been on sale the week previous … interesting. We chatted about our plans for the next few days. He had never climbed ice before, but wanted to try it out on Gothics the next day. Soon, after a few millilitres of beer, we were falling asleep, warm in our sleeping bags, dreaming of the day to come. 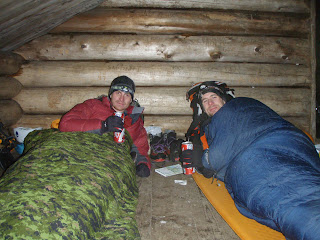 
The next morning, we awoke to absolutely frigid temperatures. I don’t know exactly how cold it was, but it was freaking cold. We started cooking our breakfast of bacon and eggs, while our fast and light hut-mate added Gatorade powder to his water and put his new technical La Sportiva boots on. Soon, he took off and we quickly followed. We checked out the map, plotted a route and were soon within sight of Gothics. The approach to the base followed a frozen brook, which made walking pretty easy. As we got closer, we began to realise that the ice was ridiculously thin. Like 2mm thin! We threw our crampons on and got our axes out anyway, and headed up. 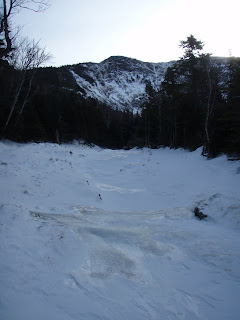 
The first little bit of the climb was very easy; just some snow and ice, through the trees, to the base of the slab. When we arrived at the bottom of the 1000 foot slab, we realised that the North Face was not even remotely in. There were patches of semi-thick ice, but the rest was just rock at best and mostly very slippery rock. Again, we headed up anyway. We knew the route would involve difficult route finding, sketchy protection (if any at all) and delicate climbing. That said, conditions were perfect and we didn’t come all that way to back off now. The first step was a very balancey traverse, across a thin band of snow. We made it, by leaning way into the slab, as there wasn’t anything to hold onto. This was followed by a short climb up some very, very, thin ice/slippery rock. Soon, though, we were on a small patch of deep snow, contemplating our next move. We could try to move into the centre of the slab and go up a thin ice patch, without pro, or we could stay left and move up a snow band. We thought for awhile and decided to play it safe and move up the snow, as we were still protectionless at this point. About half way up, we realised moving into the meat of the slab would not be in the cards on this trip. So, we moved further left and worked our way up this ridgeline. Getting there involved another very balancey traverse. The difference this time, was that is was more difficult and we were 500 feet off the ground. We made it, though, and made our way up some 5.4 terrain until we reached the trees we longed for. 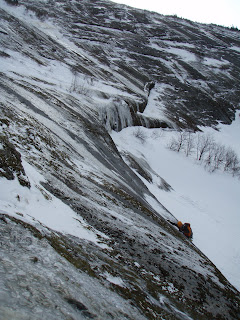 Figure 4: The first of many balancey traverses. 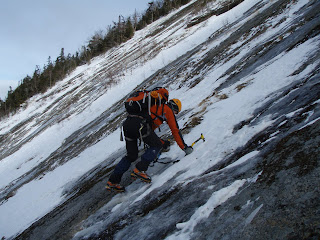 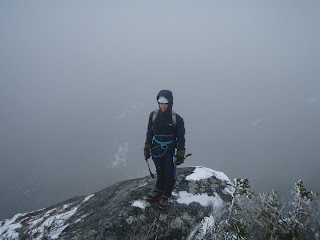 Figure 6: Below the summit.


Once in the trees we felt like we were, relatively, out of danger. We slowly made our way through waist deep snow to the false summit to the East of Gothics. It had grown windy and we were now in the clouds. So, we kept low, in a dish, and had a snack. We left our packs there and moved across a short saddle to the summit of Gothics. On the summit, we took a picture and quickly made our way back to the packs. On the way back, we ran into about 10 people who had taken the walking trail up the ridge. One of them happened to be a former employee of Kingston’s Trailhead. We chatted for awhile and made plans to climb at the gym the next time he was in Kingston. Small world! 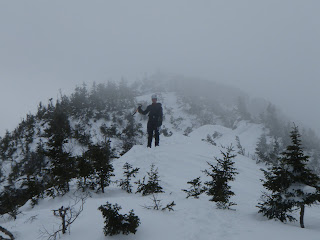 Figure 7: Moving across the saddle. 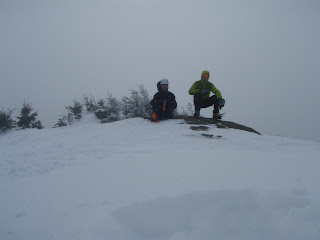 
We descended via a gully on the Eastern side of the mountain. It was an easy, quick, descent. Once back in the valley, we made our way back to the Ore Bed Lean-to. James had, we guess, decided to leave and was gone, by this point. Apparently, ice climbing either didn’t agree with him or he was put off by his hut-mates. We will never know. Once back at the hut, we got a roaring fire going and started cooking our steaks, drinking our warm beer and generally revelling in the outdoors. We were expecting two friends from Kingston to join us, but they didn’t show. Instead, two Quebecois climbers, who were training for Denali, joined us at the lean-to. It was great. They told stories of climbing other big mountains around the world. We picked their brains about Elbrus, which we plan to climb this summer. Generally, we had a great time chatting it up, eating and drinking. Soon, it got cold and we all retired to our sleeping bags. 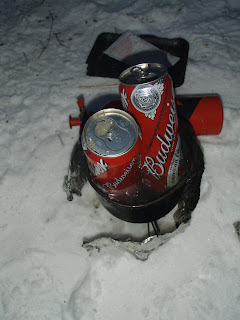 
Sunday morning came. It was much warmer than the previous morning, due to cloud cover and light snow. It was perfect. We shoved all our gear in our packs and started booking it out. A couple of hours later, we were back at the trailhead, signing ourselves out. We changed back into our sneakers and made our way back into Lake Placid. We wanted to try on some boots at a mountain store there. Along the way, we picked up a hitch-hiker who had to meet his girlfriend at Subway for Valentine’s Day, he was happy to see us after 10 miles of walking. We dropped him downtown and checked the store out. They had very limited boot selection. So, instead, I bought a copy of the newest “Alpinist”, Marian bought some mitts, and we left to get a sandwich nearby. Soon, we were on the road back to Canada. It was a great weekend, an excellent climb and the best part is that now I can start planning my next climb! Figure 10: Saying farewell to the hut.