What to do the weekend of the 26th…hmm. NP suggested Gothics North Face via the New Finger Slide. It sounded good to me since he’d spotted snow along the edge earlier in the week. This suggested that the conditions might be good enough to at least scratch our way up. Neither of us could have guessed how fantastic the conditions actually were, however. Deep snow at the base, consolidated snow/ice (neve), yellow ice, verglas, occasional frozen turf and a strong wind blowing snow down the face made it a true mountaineering adventure.

In hindsight, this also completed a circuit for NP and I as climbing partners. We climbed Gothics’ East Face, South Face and West Face during the winters of 2012 and 2013; the North Face was an equal adventure. That in itself gave me pause to smile when he mentioned it at the end of the day. It takes a person you trust intuitively to embark upon these outings, someone that always has your back.

We departed from the Garden trailhead at 8:00 a.m. wearing microspikes and carrying crampons and snowshoes. The darn snowshoes never left our packs, but there was a couple feet of snow at elevation so I figured they were required. I suggested using the Southside Trail to avoid the ups and downs of the Phelps Trail. Johns Brook was frozen over, so this worked out well. A few icy sections were challenging in microspikes (like the area before the flume at the former ladder). All in all, it saved time and energy which helped since neither of us felt entirely energetic—at least that’s what we admitted to each other a couple hours later at the Orebed Leanto.

Fast forward to the drainage of the North Face. About 5 ½ miles from the trailhead we regained our ambition—we were free of the trail and near to our target. The drainage was quite solid…most of the time. I was the first to fall through—thank God for gaiters. NP took the plunge at a different location not a minute later. The affair made us a bit more thoughtful about each step until it solid ice came underfoot on the slab a couple hundred feet below the face.

Strong winds whipped up the snow and blew down the drainage, each wave creating a miniature whiteout. This would only get worse over the next several hours. The conditions were “full-on” as NP stated. In fact, the conditions reminded me of our climb up the West Face last year. As we got closer to the base, it was obvious that most of the slab was still bare. That was no surprise. The lack of snow at lower elevations wasn’t indicative of conditions along the base, however. As we approached the icy runout changed to a snow slog through a couple feet of snow. Some areas were deeper.

The face is always awe-inspiring from below: a 1,000 foot high, quarter mile wide face of stone tends to be impressive. This time it had an oppressive feel due to the obscured views, stinging snow, unrelenting winds and the temps (with wind chill) that dipped below zero. We sat to catch our breath and survey the scene about half-way across the base. Frozen lichen and moss, some ice high above and small areas of neve surrounded by oceans of bare stone were among the details. Along the right-hand side, the New Finger Slide seemed to be in good condition. 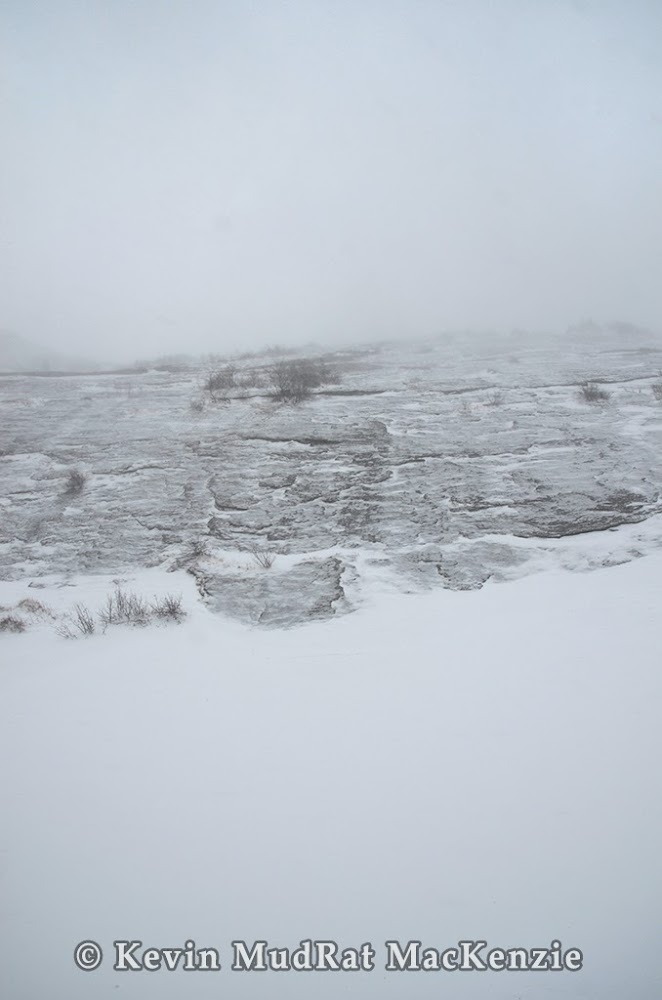 Lower pitches of the center of the North Face. 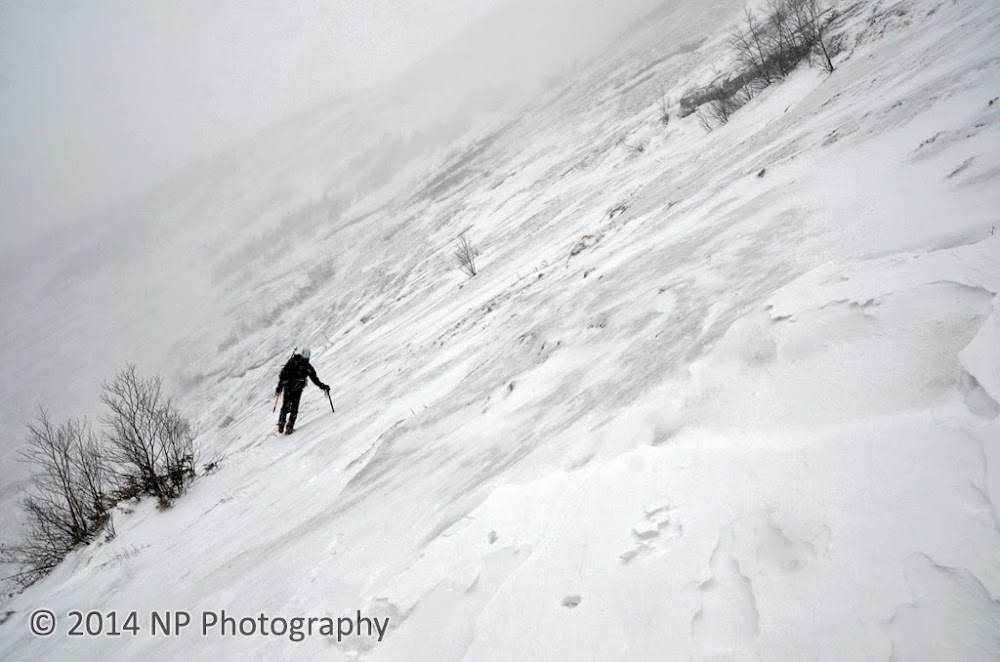 Kevin traversing across the face at the top of the rising corner.

The right rising corner that starts the route was impacted with snow. We expected it to be soft. When I saw NP’s face light up, I knew it was consolidated. It took little time to walk up the ramp and across the top of the feature—200 feet above the base. The underlying moss was holding the neve and ice well. Easy climbing up some yellow ice led up to an island of trees which we bypassed to the left en route to the beginning of the crux pitch (about 300’ from the bottom of the right-hand side of the face). In summer this is a crack that leads to a friction climb rated 5.1. 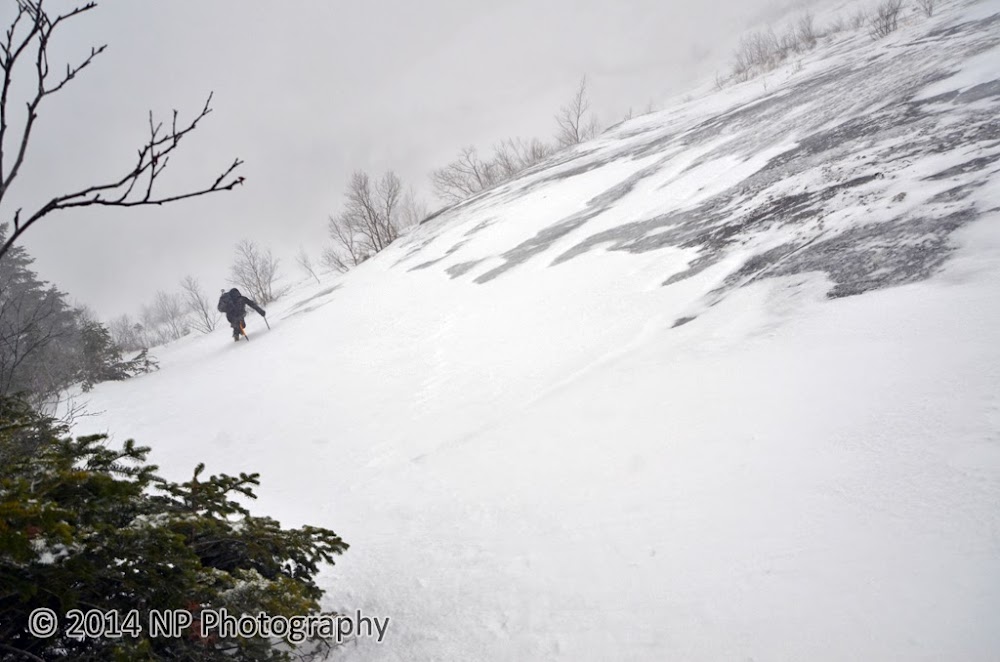 Kevin climbing around the tree island to the bottom of the crux (well the crux during summer months).

It became considerably more challenging afterward. I traversed out onto the face across some thin ice en route to a couple of corners that were impacted with neve. Just beyond, was a wide area of ice. Over the wind, I heard NP shouting, “Why’d you go over there?!” He’d found a nice line of ice closer to the edge and must not have heard my suggestion that we explore outward.

I felt the exposure below, but could see little on account of the blowing snow and another developing problem—my glasses flash froze and built up with snow (no I didn’t have goggles). Blurry vision over the top of the rims led me to the corner. With wind howling down the face and more thin ice a few feet to my left, I followed a corner of frozen turf up for about 100 feet. All the while I made sure I wasn’t climbing into a situation where I’d encounter un-iced featureless slab. I didn’t want to think about down-climbing with limited vision in these conditions.

Another corner led slightly farther out onto the face before I found a line back toward the right. Meanwhile, NP was contouring over toward my location hooting with excitement from what he had just climbed. 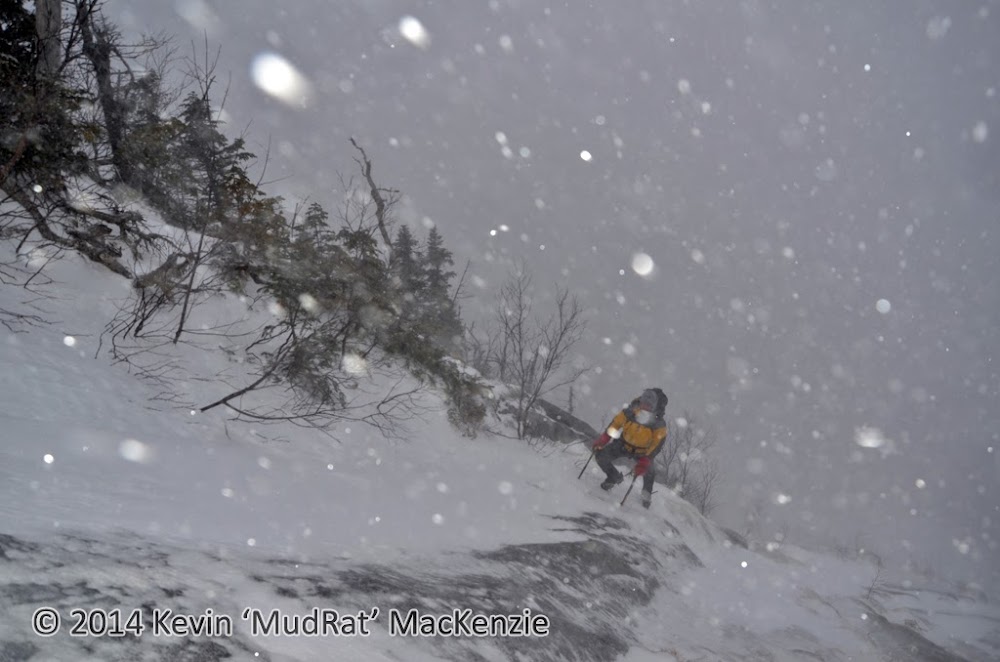 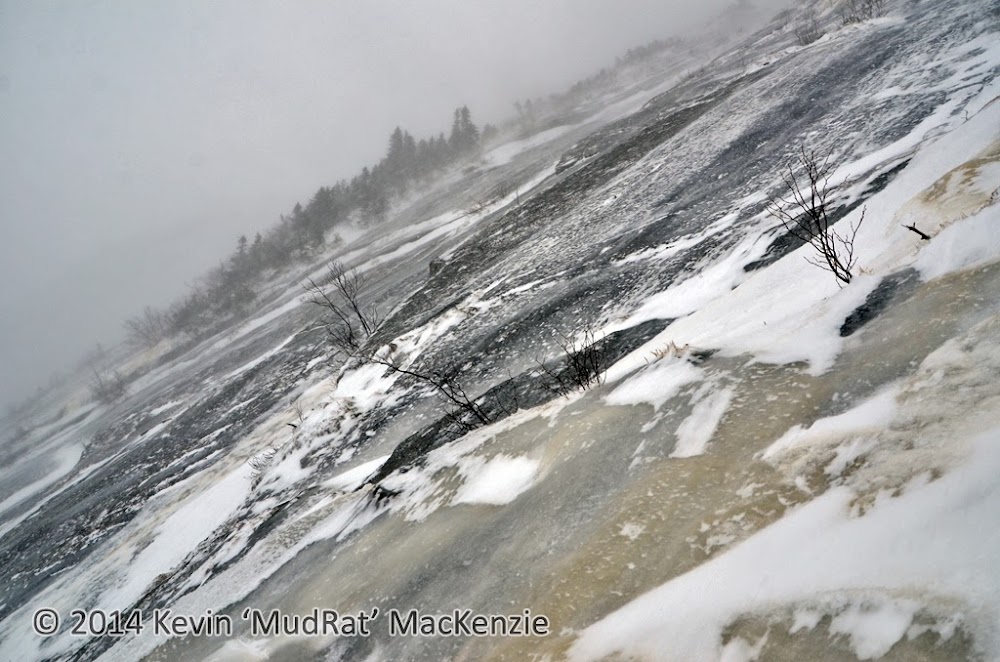 Portion of the face well away from the side.

In a secure location on good neve, I set to the task of cleaning my glasses. And THAT is when the lens came loose. Yes, God has a sense of humor! With the ice on the screws and frame, I simply gave up and put them away. (In retrospect, ice had penetrated under the frame and the lens simply slid out when I applied pressure to clean it). Little did I know this would haunt me on the way out as well.

The next pitch was up a run of yellow ice, our crux of the climb. The 75 foot run of 3 inch-thick ice thinned at the top where it was steepest. NP called a warning, though much of it got lost in the wind. I simply heard, “Take care, the…” Below was about 800 or so feet of runout—the fast way down to the bottom. It’s during times like this that everything melts away; the problems of life, the cold, the wind, the burning of one’s calf muscles. You simply feel at one with the mountain and the task at hand. 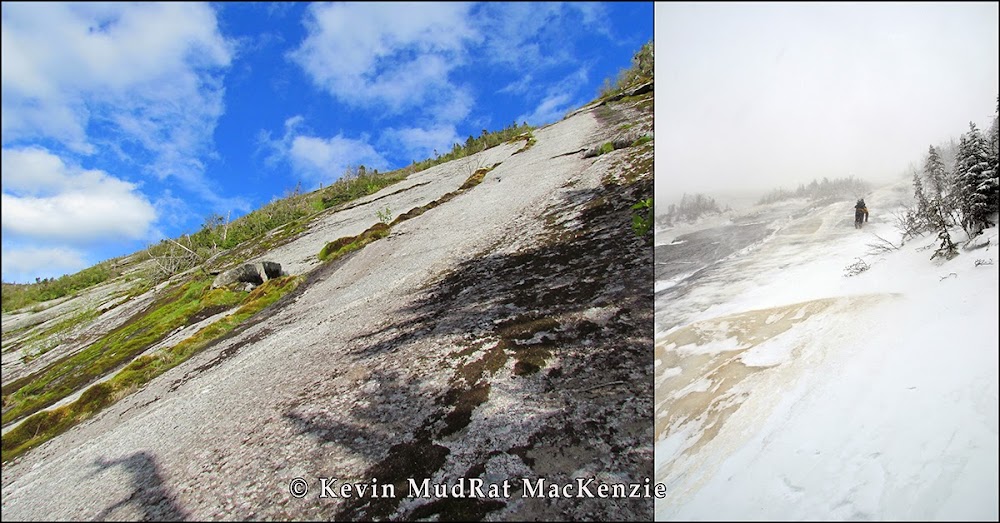 NP on the crux pitch of this outing. 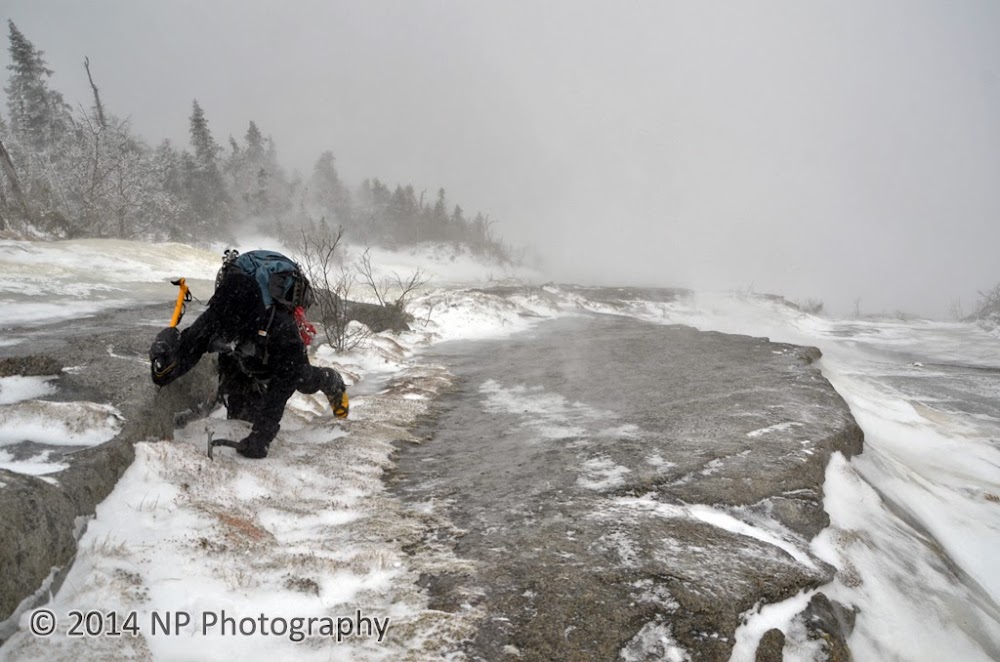 Kevin working his way up a corner on frozen turf. This was above the crux pitch near the beginning of the slide tributary. It's also a good bit steeper than it looks.

We rested on a frozen clump of moss below yet another small corner below the bottom of the upper slide tributary, a narrow section of the face leading toward the summit ridge. The face fell away below, a bulge of ice at our feet. We couldn’t see the bottom; it was obscured by the snow. Gusts of wind knocked me off balance as I took some video of NP climbing higher before panning across the face. It was a beautiful scene in my opinion, but I doubt everyone would agree. It was a display of the natural forces that only some will witness first-hand.

The krummholz surrounded us on either side as we climbed higher. More climbing on moderately sloped terrain, perhaps 35 or 40 degrees, led up to a large ledge of ice (overlap). We crossed below it and climbed a nearly vertical pitch of thick yellow ice onto the last part of our journey—the traverse diagonally up toward the summit. A hundred feet higher, a last bit of verglas led directly to the summit bolt.

It was a different world on the summit ridge compared to the lackluster snow conditions down low. There was at least 30 inches of snow, though the trail was well packed. A quick walk down the icy cable route found us at the col around 3:00 p.m. I reflected on our journey as I changed gear and filled my stomach. It had taken us two hours to climb the face, what I considered good time in those conditions especially with the photo and video breaks (excuses to rest).

Fast forward to our exit via the Southside Trail—I tried wearing my glasses without a lens as I couldn’t get the screw loose to put the lens back in place. That made me nauseous since the left was blurry and the right was clear. Thus I tucked a liner glove under my hat to cover my eye. I could keep both open, and the lack of stimuli to my left eye made walking easier—other than the total lack of depth perception which grew worse as darkness fell. It was an absurd few miles, both the situation and the way I must have looked. It all ended well and somehow seemed like a fitting end to an exciting Saturday. 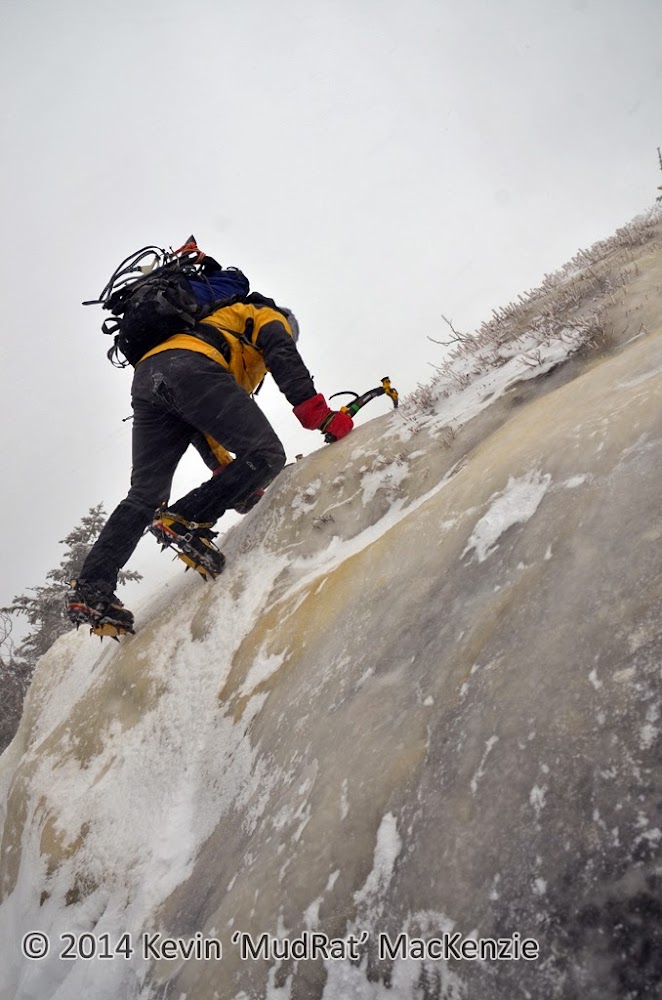 NP climbing up to begin the traverse to the summit. 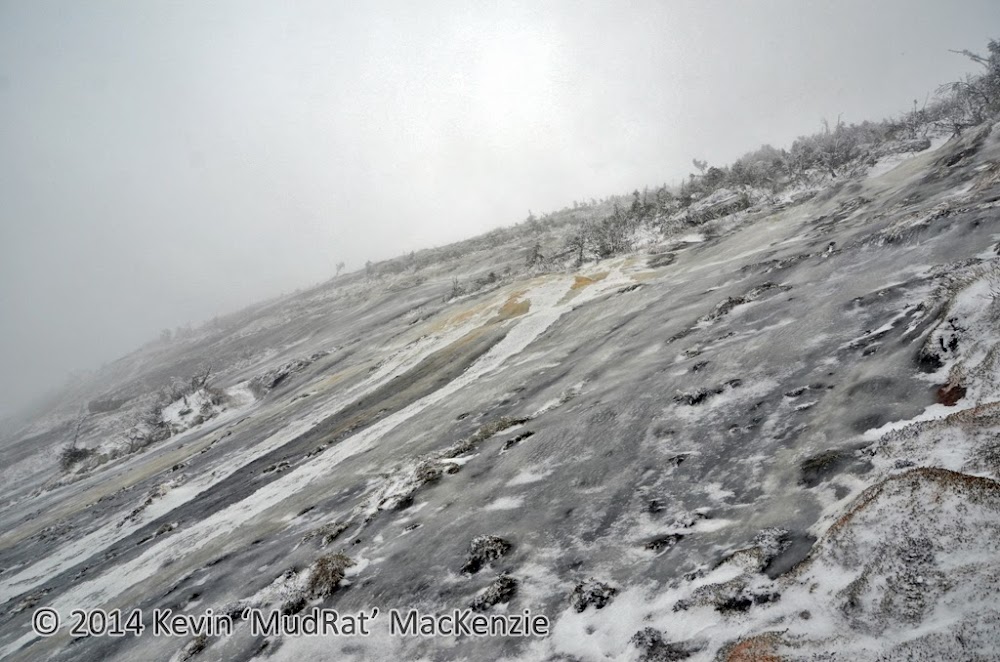 Line to the summit. This area is about 900 feet above the base at the center-right of the face.