The Cinque Torri group in the Cortina Dolomites are a small and fine mountain group - one could speak of miniaturized Dolomites - consisting of towers, spiers and numerous enormous boulders of dolomite of various sizes. The towers - seeming to be only five when seen from the Ampezzo basin but actually more than five - are located between the Croda da Lago mountains to the East and the impressive South face of the Tofana di Rozes to the West.

The area offers a multitude of easy sport climbs as well as many classic multipitch trad routes, getting to the airy summits of the towers, from 40 to 170 meters of length. In the midst of the Cinque Torri there is a kind of valley formed by gravel and small boulders, through which various paths wind, allowing the climbers to move from one tower to another. Among these, the Torre Grande, as its name says, is the largest, highest and most massive one, measuring about 170 m, while on the contrary some boulders reach a height of just 10 meters!  Torre Grande rises at the southern end of the group and is formed by three towers: Cima Nord, Cima Sud and Cima Ovest.

This route climb Cima Nord 2350  m, the highest summit of Torre Grande and the highest one of Cinque Torri Group.
It’s the Normal route, so the difficulties are quite low, but the climb is anyway amusing and quite long compared with Cinque Torri standards. The view along the route is amazing. The rock is good but a little bit greasy in some spots, the lenght is about 180m, III+ UIAA

The closest town is Cortina d’Ampezzo. The starting point of the various approachs is the road Cortina – Passo Falzarego

- From Trento or Bolzano: take the Brennero Motorway, exit Ponte Gardena and then follow the Val Gardena road to Selva di Val Gardena and Passo Gardena, reaching Corvara and La Villa. Turn to right towards Passo Falzarego, get the pass and here descent towards left along the road SS48 towards Cortina d’Ampezzo as far as the Cinque Torri chair-lift station (about 3 km East to the Falzarego Pass) and the starting point of the path to Cinque Torri.

From the Rifugio Scoiattolitake the trail leading towards Torre Grande Cima Ovest, than turn on your left and go round until you arrive at the feet of the couloir dividing Torre Ovest from Torre Nord (at your back, Torre Latina). Here starts the route (about 20 min from Scoiattoli Hut) 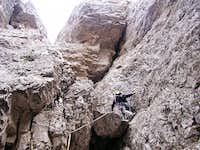 Belays are all equipped with an iron ring fixed with concrete

L1: go in the couloir, staying on the right of a wide crack, then move on your left and enter in a chimney (bolt, two hitch pins in the rock make easier a pass of IV on greasy rock); climb up the chimney until you reach the belay iron ring (25m, III and IV/A0, 1 bolt).

L2: head toward left, then climb up an easy little wall (15m, II/III, no piton, belay on a spike)

L3: in simul-climbing (the most part is a walk) go on the left passing on narrow ledges, climb up a little cliff with an embedded stone (II+), then traverse an exposed wall using a fixed cable to some big blocks; go up (a pass of III+, quite overhanging) until you reach the feet of a rock wall, on a large terrace (about 100m, some passes of III, no pitons, no belay)

L4 and L5 (it's possible to join them): climb up the rock wall on the left of a couloir (possibility of protection with camalot #2 after 10m), then climb up toward right (tunnel with cordelettes), enter in a chimney and rise it up to the belay ring, few meters under the summit(50m, III+ continuous, no pitons, 1 tunnel equipped with cords, possibility to split in 2 pitches belaying on the tunnel) 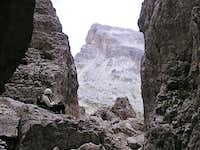 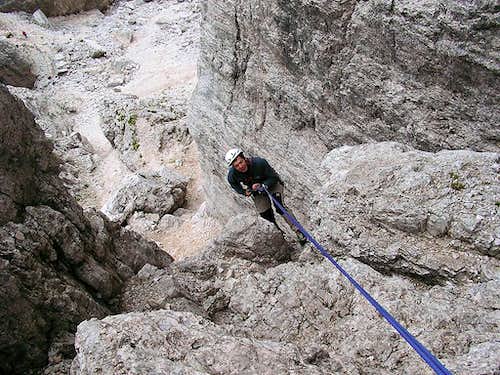 Huts and other accomodation

Many kind of accomodation in Cortina and surrounding: hotel, b&b, apartments, huts, camping