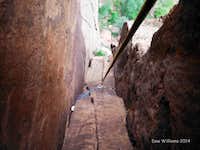 4th Pitch
Trabajando La Esquina translated into Spanish means “working the corner”.  In 2001, Bryan established this route located just beyond the fantastic alcove on Tunnel (Cragmont) Wall that is home to some of the better rock and free crack climbing in Zion (Feast of Snakes, 5.11; Picking on the Fat Kid, 5.10+; Gypsy’s Curse, 5.10; Cornback Rattler, 5.11).  Don’t expect the same quality of rock on Trabajando.   Trabajando is the dirtiest free route I have climbed to date in Zion and that is saying quite a bit considering I have climbed most of them. Perhaps it is because we climbed it between storms in July, but I speculate since the rock was in bad shape both inside and outside the corner, that the route never cleans up.  I can only imagine that some sort of drainage occurs and/or has occurred here over time. 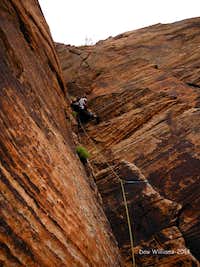 3rd Pitch
The route follows the obvious left facing corner for four pitches as soon as you turn the before mentioned alcove to the left. This is a super position in the canyon with great views on a large ledge at the start. The first pitch is sort of a junker regardless of rock issues in terms of uneventful climbing. The second and third pitches offered pumpy finger crack lay back finishes at the grade on suspect rock. The forth pitch could easily be rated X if for no other reason than the rock was a disaster. On lead, I was climbing the short off-width section and grabbed what appeared to be a solid inside corner only to break it in half. This was not a block, rather it was part of the wall!

Park at the second to last pull out heading up to the tunnel’s west entrance. Catch a trail that starts at the right end of the stone wall. Follow it well below the tunnel windows and head for an obvious shaded alcove after about 15 minutes below the wall. Cross over and descend loose sand to reach the base of the tall corner on the outside left side of the alcove.

1st Pitch- 80’- 5.8/ An uneventful starter pitch in the blocky corner that is shared with Scandalous Hooker (5.11) that gets you to the large ledge above. Don’t get your hopes up, the rock quality never improves from here. Belay on gear in the next corner.

2nd Pitch- 125’- 5.10+/ The next two pitches offer similar cruxes at the grade via their finish. Start off the deck up the steep hand/finger crack corner with a little chimney/stemming action to assist. The middle portion of the pitch is chossy as hell but easier climbing. The finish is a scary, sandy and mossy section that starts by having to pull a fist over a significant bulge into an off-width. The fist is not quite high enough in the corner (before opening up) making it an awkward move on dirty rotten rock. From this rest, continue up the mossy and sandy finger corner. Lay backing on this kind of rotten rock is scary to say the least. Exit left via loose rock to the fixed belay on a small ledge.

3rd Pitch- 110’- 5.10+/ Head back right to the corner over bad rock. Stay with the corner (as the name of this route implies). The left wider and easier crack is chocked full of loose, rotten rock and will not be advised or appreciated by your belayer. Towards the end, lay back the overhanging section of the corner in the best rock of the day (but still dirty as hell!). Fixed belay out left.

4th Pitch- 120’- 5.10/ This pitch is not as sustained as the previous two, but definitely more dangerous in terms of loose sandstone. Head up into the chimney on the right side (remember, stay with the corner the whole way) using off-width technique until you can chimney for several meters. Any pro will be quite questionable through this section, basically using cracks between blocks. Be competent in your wide skills. Once you can stem higher where it starts to contract, you can get a bomber C4#.5 in the left crack.  Pull through the bulge into the next chasm above. You have two choices. The easier climbing is staying to the outside and stemming up to pull the final roof above, with zero pro. Or go to the back of the very sandy and loose chimney and place a C4#4, extend it, then chimney up the mossy/dirty walls until you can place a C4#2 and pull over the chimney. I can't say I think the #2 would really hold a fall, so either way you go, it would be best to be damn careful. Continue up a few more meters. The fixed belay is up and right.

Double 60m ropes. Bryan calls for a full double rack to 4” and a single 5”. I recommend a single from C4#.3 to #4 (and skip the #5), double from #.3 to #2.  If anything extra, a few bring more finger pieces and one .2 piece. Bring plenty of slings for that last pitch, I had six and needed more. Because Trabajando lies on the outside of the corner, it does get some morning sun and would definitely get all day afternoon shade.