Drive to the South Branch Pond Campsite which is where South Branch Brook leaves Lower South Branch pond. Check in with the ranger because the park requires that and describe your route. Do not attempt this when the black flies are in season. Late May thru June. If you are from out west these are cousins to something called the buffalo gnat and you do not want Alaskan sized clouds of these blood thirsty minutia after you when you are out in the forest. 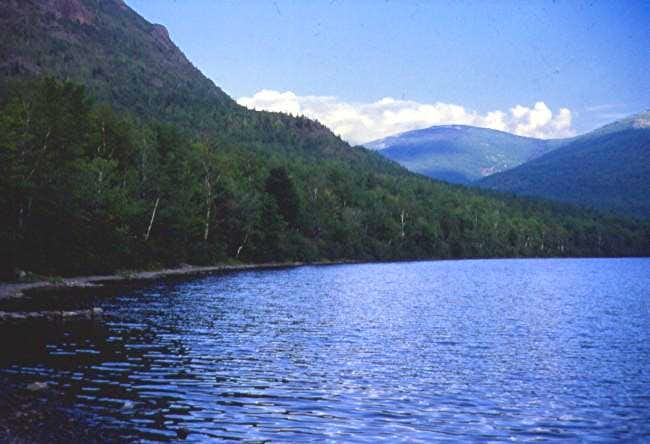 This is now an official maintained park trail- no longer a bushwack. The park does recommend that you be prepared for a long walk. Hike south along the east side of Lower South Branch Pond down the Pogy Notch Trail. Cross Howe brook after about a mile and begin climbing up the side of Center Ridge Either take Center Ridge or continue a bit farther south and go up east on Pinnacle Ridge-I think there is a trail up Center Ridge and I can't honestly say whether we climbed Center Ridge or Pinnacle ridge. These meet at the Peak of the Ridges which shows up in pictures. The peak of the ridges is about 3 miles from the campsite. From there wend your way up thru alternating groves and scree to the top in about 1.5 miles and you will probably be alone except for the view of the East Branch Penobscot Valley to the East. Turner and Katahdin to the South, Matagamon Lake to the North and Black Cat Mountain. to the West. Now comes the hard part.
Your goal is North Traveler. The distance between the Traveler and N. T. is about 2.5-3 miles so follow the trail north and go NNE to the next bare summit sort of a Middle Traveler 2976 feet. It's not too bad but it will take a while. Now descend again going north. Try to stay on the trail- it is kind of thick in the col 2550 feet before the North Traveler. We got stopped by a big bull moose there. Now ascend up to the top of North Traveler reaching the open top 3152 feet. Enjoy the view and descend thru park like meadows with red spruce and balsam fir. Eventually it gets steeper and 2.7 miles from North Traveler you are back at the South Branch Campsite. The total climb is 2550 but there is a drop of 350 feet from the Peak of the Ridges to the saddle between it and the Traveler so it is more like 2300+650+650= 3600 ft. The park calls the entire route 10.6 miles or about 15 km.

My attire was some painter pants, gymn shoes, and a T shirt-I did take a compass and used it to sight the various outcrops. Try to keep a straight course but weave thru the nasty stuff. For a westerner, it would be instructive to look at Radek's pictures of Mount Stone to realize the possible density of Maine undergrowth. Its best to wear typical mountain garb and have some boots because it's kind of rough. Bring some water because brooks on the mountain are not reliable.

For those who like a little exposure the Traveler mountain loop has the most above the treeline hiking in Baxter Park.