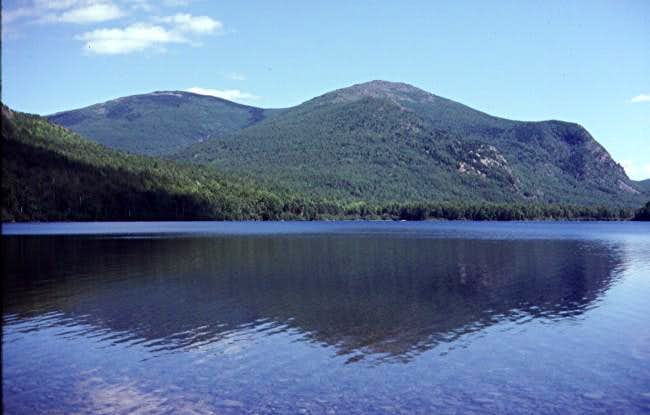 Traveler Mountain is the highest mountain in Maine north of Katahdin. It is what is left of volcanic activity from hundreds of millions of years ago. The kind of rock there is called Rhyolite. Katahdin is what is left of the magma chamber that supplied the ancient Traveler with volcanic stuff. It is situated just east of South Branch Ponds and west of the East Branch of the Penobscot river. Baxter Park is one of the largest State Parks in the U.S. at 205,000 acres or so. The mountain sprawls out like a big starfish with ridges running north and south and west toward the highly photographed South Branch Ponds. North Traveler is the north peak which is 3152 feet and stands above the campground by the lower pond. The upper pond is south of the lower pond and is adjacent to Center and Pinnacle ridge from the Traveler. Thoreau came by in the 1850's and wrote of his trip from Chamberlain Lake to Telos Lake to Matagamon Lake and thence down the East Branch of the Penobscot River
to the confluence with the West Branch at Medway. Thoreau had to deal with the white water on the East Branch at Stair falls,
Haskell Rock Pitch, the Hulling Machine and and Grand Pitch-all of which are in sight of The Traveler-so named for the phenomenon of a distant object to have an apparent forward motion as one passes. The Traveler has a surprising amount of bare area on the summit for mountain of this altitude and should be approached with the usual care during a thunderstorm.

To climb the Traveler from South Branch Pond campground at South Branch Brook,
walk south along the east bank of the lower pond following the maintained BSP path-Pogy Notch Trail past Howe Brook until ascending cliffs overlooking the upper South Branch Pond. At approximately its highest point start to ascend either Pinnacle or Center Ridge. These join at the aptly named peak of the ridges from which you have several hundred feet of elevation gain to the summit. This is semi open country and it is not a bad bushwack( no trail). Reach the open summit and you will probably the only one there for lots of miles in quite a wild area with the resident wild creatures. Only the panther whose scream Thoreau heard and the caribou are gone. The moose deer, bear, eagle, salmon and trout are still there.

Travel to Portland Me and enjoy your drive up route 1 or blast up I-95 to Bangor. Continue up I-95 to Medway at which point you can follow the West Branch of the Penobscot up Me 11 through Millinocket which at one point had the largest paper mill in the world but sadly only runs 2 paper machines now. Drive 20 miles up to the Togue Pond Entrance. Drive West about 7 miles to Katahdin Stream and then farther west toward the distintive Doubletop Mtn. At Doubletop drive north along Nesourdnehunk Stream to McCarty Field and then gradually north east to South Branch pond. The speed limit on these gravel roads is around 20mph. You might want to stop to fish in some of the brooks and lakes. Millinocket is a about 70 miles north of Bangor. The distance on the park gravel road is around 40 miles -20 mph speed limit. Alternatively you can drive north along the East Branch of the Penobscot from Medway on Me 11.Thirty miles later reaching Patten drive west 26 miles toward Traveler Mountain and BSPon route 159. Reach the park at the Mattagamon Gate and then follow the gravel road to South Branch Ponds for 11.5 miles. Either way you are going to be doing 60 miles in the forest.

Car entry fees are $10.00 per car in 2003 and $12.00 per car in 2004 for non-Maine vehicles. Baxter Park is highly regulated and a lean-to will cost you $16.00 per two in the lean-to per night. Firearms are to be in locked cases in the trunck of the car. You may rent a canoe if you would like to paddle about South Branch Ponds They are about 1.5 miles long.

Camping is permitted only by reservation in authorized campgrounds and campsites. If you are wishing to camp within the park , the best advice I can give is to request it EARLY. The park starts taking applications the first business day after New Years and people literally camp out on the steps of Park HQ to get reservations. Maine residents get preference too. During the summer the park is usually filled to capacity.

There are 10 campgrounds within the park, however, only 1 is usually used for The Traveler - South Branch Pond. Russell Pond and McCarty Field are a bit South but could also be used.

Depending on what accomodations you want, fees can be from $3 to $50. Click here for more information about camping and for detailed information on the various campgrounds.