The first ascent on Triglav is an important mountaineering milestone. As a lot was already published about it, here I'm presenting just basic facts* and a few obvious comments. So thousands of those who nowadays climb the highest mountain of Julian Alps, could be aware and proud of the brave achievements of those pioneers.

* Even if the story looks consistent, all details are still not 100% proven. But this is now the formally accepted version.

Belsazar de la Motte Hacquet (also Balthasar or Balthazar Hacquet, 1739 – 1815) was a Carniolan physician of French descent in the Enlightenment Era. He was a war surgeon, a surgeon in the mining town of Idrija, and a professor of anatomy and surgery in Ljubljana. Among many other things, he was exploring also the Julian Alps and his fine descriptions show that to the pure scientific purpose of his trips he was already adding experiental enthusiasm.

In 1777 Hacquet made the first attempt to reach the summit of Triglav. With a strong team of local people he reached the alpine pasture of Velo polje, but next day weather was bad and the guides did not recommend the final climb. Still, Hacquet went on at 4 a.m. alone, accomplished the difficult climb to Mali Triglav, 2725 m, but in a fierce wind he couldn't attack the knife-sharp summit ridge. He hardly descended to the group and also the next day weather was not allowing the second attempt from the other side of mountain.

The first ascent on Triglav, 2864 m, was accomplished on August 26th, 1778, so 8 years before the ascent on Mont Blanc (Paccard & Balmat). The ascent was led by Lovrenc Willomitzer (1747-1801), the surgeon from Stara Fužina in Bohinj, who had accompanied Hacquet a year ago. He was accompanied by a hunter, called Štefan Rožič, and two miners, Matevž Kos from Jereka and Luka Korošec from Gorjuše.

August 24: The team reached the alpine pasture of Velo polje.

August 25: The team found the passage from the southern side on the north-eastern side, on Zeleni sneg glacier.

August 26: The team went from Velo polje first westwards, then crossed below the Mali Triglav and in 5 hours reached the saddle of Kredarica. By the glacier and rocks above it they reached in good 1 hour the summit ridge just below the highest point of Triglav*. After some hesitation the team continued, succeeded to climb the steepest section and soon reached the summit. They realised that nobody was on top before them. After 2 hours they left the summit and happily descended the mountain.

* So, the first climbers did not ascend on top by any of today normal routes. Not from Ledine, where today the Planika hut stands, and not from Kredarica over Mali Triglav. Instead, they climbed from Kredarica over the glacier (Zeleni sneg), through the Mueller chimney (as it was named later) and the rocks above it, just to the last head in the summit ridge. In old times (beginning of the 20th century), until the glacier has almost completely melted, that route was used for winter climbs.

The professor soon repeated expeditions in Julian Alps, accomplishing the 2nd and 3rd ascent (not 100% proven, but very likely). In 1779 he was accompanied by Willomitzer and Kos. He had to correct his judgement from 1777 that from Mali Triglav one would need only 30 minutes to the summit of Veliki Triglav. Three hours were needed only for that part of the summit ridge! On the other visits Hacquet explored Triglav again, adding scientific data to his measurements.

The first ascent on Triglav has its historical importance for two reasons. First, it was done very early - even before the day, when with the ascent on Mont Blanc modern alpinism was born. One could argue that a rock ascent can't be compared with a glacier ascent. But here lies the second reason of Triglav's first ascent importance. That rock climb was difficult. In the last years of the 18th century other ascents followed, but let's skip them and listen to the words of Valentin Stanič, the famous climber who reached the summit of Triglav on September 24th, 1808: 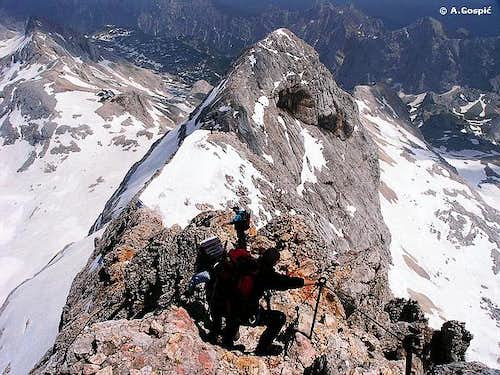 "We reached that sharp ridge which connects Mali and Veliki Triglav. If I had with me a novice climber, I would for sure be worried for him; so my advice to every novice climber is that it is better to refrain from the joy of Triglav ascent than to risk such a danger. The ridge we must overcome is very narrow and sharp. On many places we must balance by it with extended hands; the very sharp ridge is decayed, when putting a foot on it, you see on the left and right almost vertical, horrible abysses. During our ascent they were mostly obscured by fog, but even more horrible was the view into them, when wind suddenly cleared the clouds and your eyes were measuring the depth just to the feet of the mountain and your head got dizzy. I had climbed so many Salzburg mountains, I was on Hochstaufen from various sides, on Hoeher Goell, on the last, before me still unclimbed highest summit of Watzmann, on Grossglockner, which I had measured, - but here on Triglav I had to do, what I did nowhere else. I had to obscure my view with both hands, in order to not see the abysses on both sides, but just the path ahead. The southern wind was with strong gusts putting in jeopardy my balance. So it went some time, until we again started to climb over the almost vertical wall up. Slowly we were reaching the goal, as the ridge became almost flat and broad...". And then they reached the summit ciarn.

Let's have in mind that Stanič was a brave climber. He soloed the first ascent on Watzmann and did many other, for those times difficult climbs.

The summit ridge on Triglav remained difficult almost 100 years (many climbers were riding sections of it), but with time it was more and more hammered and later also secured with iron devices.

Very interesting article, Vid. Historically the summits climbed up before 1786, the year of the first ascent of the Monte Bianco are very few...in fact at this date the story dates back the born of mountaineering, but it is a completely conventional date, because obviously other first climbs by unknown hunters or explorers do exist, of which there is no historical memory.

Thanks, Alberto! Well, the birth date of modern mountaineering should stay on the year 1786. It's OK, because, as you said, there were other ascents too. Mont Aiguille was climbed even much before...

I agree. Also Rocciamelone in Piemont, climbed in the year 1358!