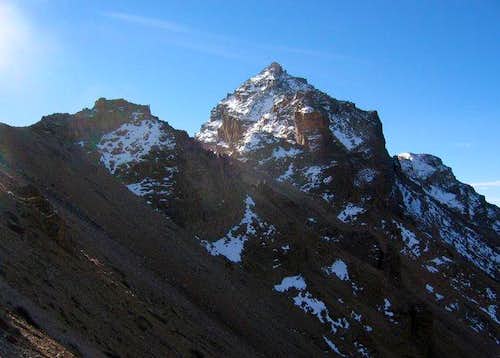 Introduction to Hiking and Climbing in Each Section of the Uintas

Since the Uinta Mountains is a large range, and is so different from one part of the range to another, the range has been divided into four sub-sections as well. Here is a brief overview, but see the individual subsections as well:

Most of these peaks are day climbs, and the highest peak is Bald Mountain at 11,947 feet. Despite being lower than the other sections of the Uinta Mountains, this area receives some of the highest snowfalls in the range. Timberline is lower here than it is farther east, and is anywhere from 10,600 to 10,900 feet. Most peaks are class 2-3, and only Bald Mountain and Hoyt Peak have trails to their summits. Trails are well used along the Mirror Lake Highway (Highway 150), but many trails that are accessed from various roads besides this highway are not well used.

Bald Mountain is a very popular climb, and along with Kings Peak is the most popular climb in the Uinta Mountains. The other summits along the Mirror Lake Highway see a moderate number of ascents, but the other peaks are seldom climbed. 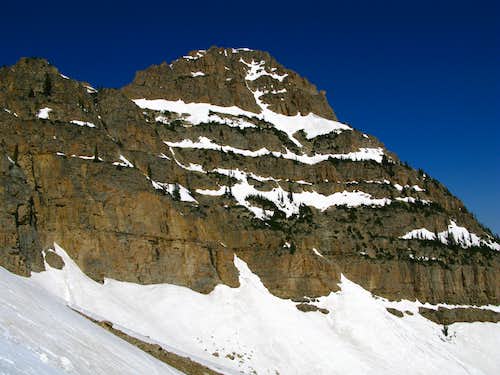 This is where the highest peaks in the range are all located, and where you can find some really rugged peaks.

Usage is a mixed bag as many areas are crowded and receive heavy use (such as Naturalist Basin, Henrys Fork, Smith Fork, etc), but some other areas are seldom visited and trails are fading away. Some entire basins are usually empty even on summer holiday weekends, while other areas may have full parking lots, and a line of hikers.

Interestingly, no mountains in the wilderness area have a trail to the summit, though a beaten path is slowly appearing on Kings Peak. 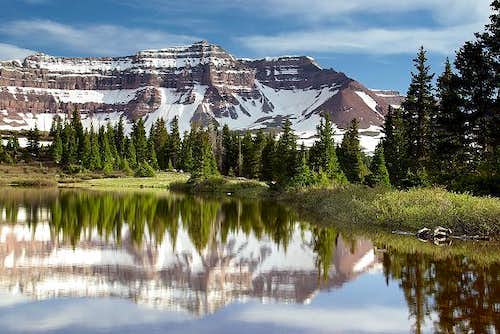 Despite the ease of ascending the peaks, most of these peaks are seldom climbed. The only exception seems to be Eccentric Peak because it is a county highpoint. Most of the trails in this eastern section of the Uintas are not used much, and many are fading away because of very light or no foot traffic. 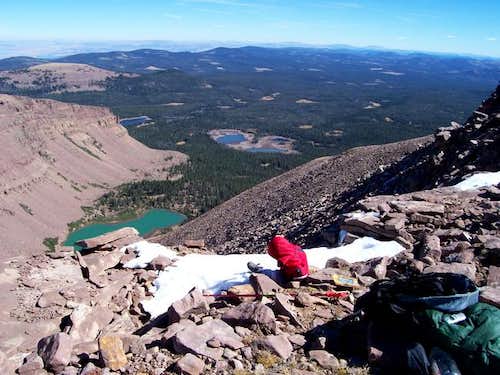 The summit of Marsh Peak in the High Bollies/Eastern Uintas.

This area of Colorado and Utah, without question, has the most remote peaks in Colorado, and a few of the more remote ones in Utah. They are incredibly spectacular and almost completely ignored, despite the fact that it offers some of the best scenery in the lower 48 states. Over a dozen very inaccessible peaks invite exploration. Only a few of the more accessible peaks are on Summitpost, but there is enough exploring here to keep one busy for years.

Dinosaur National Monument and Vicinity is a very rugged region full of upturned beds of rock, dinosaur bones, rivers, canyons, and mountains. The area is rich in wildlife and scenic beauty. 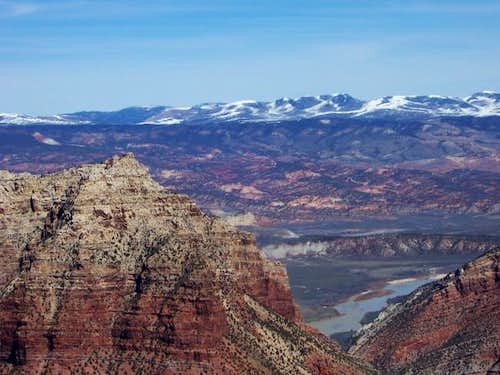 Technical rock climbing is not usually done in the Uinta Mountains because of the fractured nature of the rock. There are a few places with some good rock though, and I have done some nice technical rock climbs around Anchor Lake in the Western Uintas, Notch Lake, also in the Western Uintas, and Lightning Lake in Upper Rock Creek Basin in the High Uintas Wilderness Area. 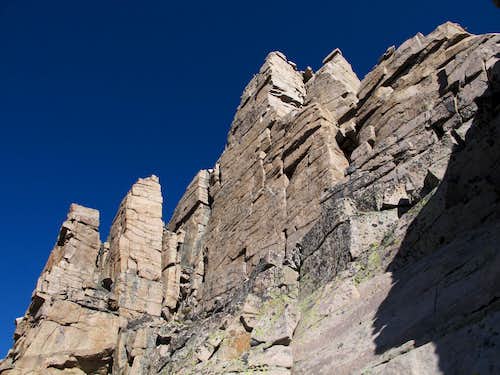 Mid-July through Mid-September is the normal hiking season in most of these mountains, though in the far west and add low elevations, the snow melts out faster. Mosquitoes tend to be very thick in July. The roads in the area are usually open in late June or early July. They usually close when ever the first big snowstorm of the season hits, usually between mid-September and mid-October.

Late March through early June is a good time to climb in the Uinta Mountains, but the problem is that most trailheads still aren’t open to the summer parking areas. Late March through early June almost always still has a lot of snow, but travel is much easier then than it is in the real winter. The snow is more consolidated, making trail breaking much easier. The days are longer and it isn’t as cold as it is in the real winter. Note that big snowstorms can and do come at this time, so be prepared for that, and have a good weather forecast.

In winter, most peaks are pretty tough and all are usually multi-day trips. Climbing the Uintas is rather unique in winter because the most difficult part of the trip is actually covering the relatively flat ground to get to the mountain's base. This is because of typically very powdery snow below treeline. Usually, once you reach the steeper parts of the mountains; the parts above timberline, the going actually gets easier because the snow is blown rock-hard.

None of the peaks in the High Uintas are that easy in winter, but pretty good winter access can be had to the peaks around Henrys Fork, Swift Creek, and East Fork Bear River. Even so, these are all multi day trips in winter. Some of the peaks are over 70 miles round trip(!) from the winter road closures and many peaks still don’t have any documented winter ascents!

None of the High Bollies are easy trip in winter, because the road closures are so far from the mountains. Marsh Peak has been climbed in winter. See details on the mountain page. Eccentric Peak is a reasonable three day winter trip from the north. See the mountain page for more info. 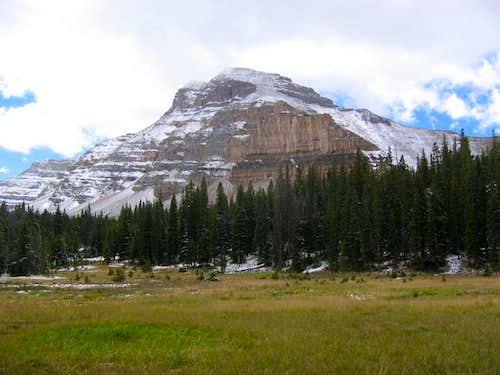 The main bulk of the Uinta Mountains is the orange- red, thickly bedded quartzite and sandstone of the Pre-Cambrian Uinta formation. These rocks are over one billion years old. Away from the core of the range, the rocks are all progressively younger in origin, and mostly sedimentary. The bones of dinosaurs are abundant in the Jurassic Morrison formation at Dinosaur National Monument, at the extreme east end of the Uinta Mountains.
The area was heavily glaciated 17,000 to 13,000 years ago, which resulted in many lakes and glacier carved valleys. Only fairly recently did the last of the glaciers disappear. Some sources indicate that a “real” glacier existed above Red Castle Lake until the 1930’s. 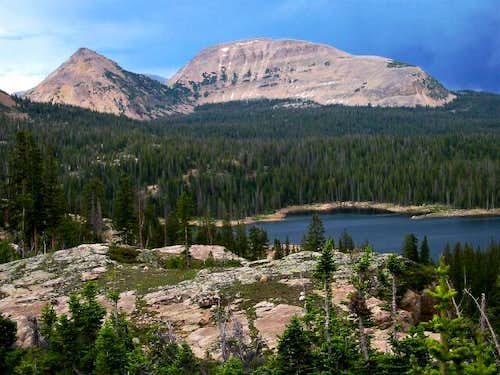 High Uintas Backcountry--Access trails only; no peak climbs. Covers Trails in the High Uintas Wilderness Area, as well as a few in the Western Uintas/Lakes Roadless Area.