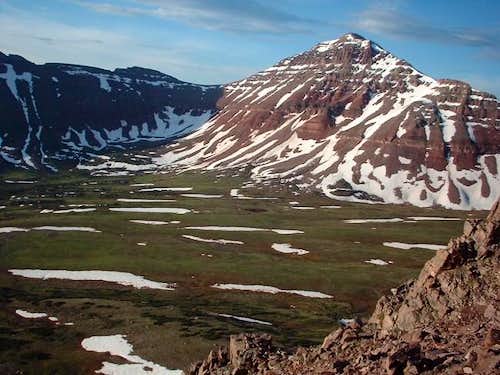 Introduction to Climbing and Hiking

The Uinta Mountains are very rugged in the northeast section of the High Uintas Wilderness Area. Beginning at Hayden Peak and east to Mount Lovenia, the Uintas are not unlike the Tetons or other ranges. East of Lovenia, the peaks are more gentle, with a few rugged peaks (ie Red Castle and Henrys Fork Peak) scattered about until you are as far east as the Henrys Fork/Kings Peak area. East of Kings Peak, the Uintas become very gentle and the peaks are very rounded with only a few scattered cliffs about.

As mentioned, many of the peaks in the Wilderness Area are rounded and gentle and the most rugged peaks are in the northwest section of the Wilderness Area. Peaks such as Hayden Peak, East Hayden, Mount Beulah, The Cathedral, and the officially un-named peaks surrounding Deadhorse and Allsop Lakes are among the most rugged alpine peaks in Utah. Even so, these peaks have 3rd or 4th class routes to the summits if you do some searching and careful route-finding. *I haven’t climbed East Hayden, so I can’t confirm this particular peak, but have climbed the rest mentioned (Yard is the only other peak I haven’t summitted in the area).

Another very rugged peak is located in the north central portion of the High Uintas Wilderness Area. This is the famous Red Castle. The true Red Castle (northern peaks of the massif) is or was reportedly unclimbed according to several sources dating at least as late at 1991. I can’t confirm this for sure, but was told so by several rangers and climbers when working as a backpacking guide/instructor in the High Uintas Wilderness in 1990 and 1991. If anyone knows if this is or isn’t the case, please post and addition/correction here. If this really is the case, it would certainly make Red Castle one of the last unclimbed peaks in the Rockies. In any case, it looks horribly loose and dangerous, but not completely vertical.

Technical climbing is seldom done in the Uinta Mountains due to the fractured nature of the rock. Never-the-less, there are some areas where technical climbing can be done. Around Lightning Lake in the Upper Rock Creek Basin, we did several find rock climbs on some of the nearby crags.

There are some nice snow couloirs as well. The best may be on The Cathedral and I have added a route page for them. Another good one is above Lightning Lake headed towards Ostler Peak. There are other good ones scattered throughout the wilderness area if you take the time to look for them.

Kings Peak is a very popular summit. Other peaks that are fairly popular are Agassiz, Hayden, and Gilbert Peak.

Many Peaks are seldom visited. To show how unvisited some of these peaks are, consider two interesting messages I received last year from climbers using the Summitpost information.

One was from SP member Joseph Bullough. He had climbed The Cathedral, a rugged and unknown peak, using the Sumitpost route description, and I had asked him if my route description was accurate since I wrote it long after climbing it. Luckily it was. On the page, I stated that in 1990, we saw no signs of ascent, no summit cairns, markers, etc, though it is probable that several people had preceded us. Interestingly the summit was still the exact same as we left it 15 years prior.

The other message was from Joec whom had sent me a message asking for my recommendations on some remote peaks. One suggestion I gave him was what I call Priord Peak, a beautiful, but pretty remote peak. I climbed the peak in 1990 and 1991 and placed a summit register on the peak on my second ascent. Joec climbed it and wrote back. Not only was the summit register still there, but mine was still the only signature after 14 years, and with a perfect pencil.

The moral of the story is that many peaks are popular, but if you look for solitude, you will find it. 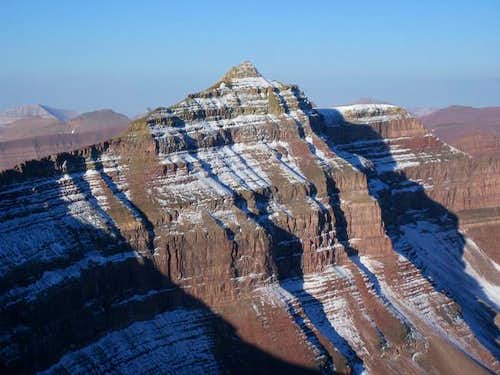 The normal summer season is July through September. Mosquitos are very thick in July.

Late March through early June is a good time to climb in the High Uintas Wilderness, though early in the season, most trailheads still aren’t open to the summer parking areas. Late March through early June almost always still has a lot of snow, but travel is much easier then than it is in the real winter. The snow is more consolidated, making trail breaking much easier. The days are longer and it isn’t as cold as it is in the real winter. Note that big snowstorms can and do come at this time, so be prepared for that, and have a good weather forecast.

In winter, most peaks are pretty tough and all are usually multi-day trips. Climbing the Uintas are rather unique in winter because the most difficult part of the trip is actually covering the realitively flat ground to get to the mountain's base. This is because of typically very powdery snow below treeline. Usually, once you reach the steeper parts of the mountains; the parts above timberline, the going actually gets easier because the snow is blown rock-hard. Here is a mid-winter trip report of an experience in the Henrys Fork Basin, and it will give you an idea of what type of conditions to expect. 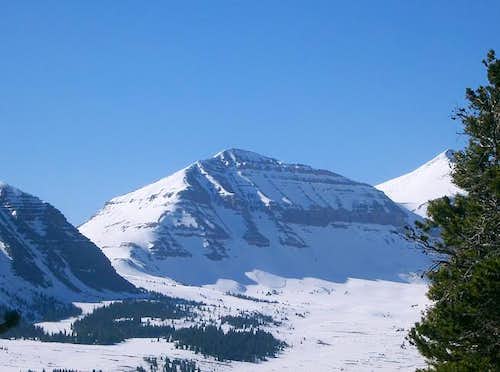 Under construction-I am doing more reasearch

I know the High Uintas Wilderness Area very well, and have to admit that I have a few favorites. These are mine, and are all places I would highly recommend:

2. East Fork Blacks Fork to Red Castle Lake, over the pass to the South and return via Little East Fork. Approximately -- miles 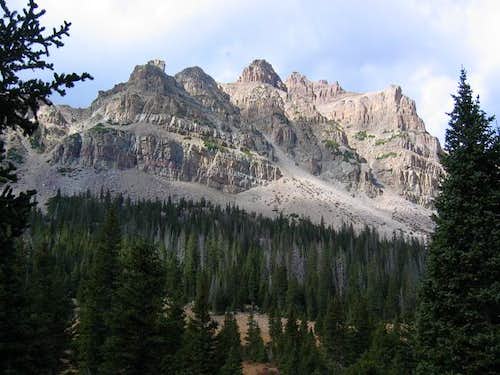 The main bulk of the Uinta Mountains is the orange- red, thickly bedded quartzite and sandstone of the Pre-Cambrian Uinta formation. These rocks are over one billion years old. Away from the core of the range, the rocks are all progressively younger in origin, and mostly sedimentary. The bones of dinosaurs are abundant in the Jurassic Morrison formation at Dinosaur National Monument, at the extreme east end of the Uinta Mountains.
The area was heavily glaciated 17,000 to 13,000 years ago, which resulted in many lakes and glacier carved valleys. Only fairly recently did the last of the glaciers disappear. Some sources indicate that a “real” glacier existed above Red Castle Lake until the 1930’s.

High Uintas Backcountry--Access trails only; no peak climbs. Covers Trails in the High Uintas Wilderness Area, as well as a few in the Western Uintas/Lakes Roadless Area.