Vantage is probably the most popular rock climbing destination in the state of Washington boasting over 700 routes. This area has plenty of challenges for the veteran climber as well as many beginner routes. Vantage also has a good combination of sport and trad routes, and over 200 routes in the popular 5.10 range. Traditional climbing has come back into popularity recently, with many of the new routes at Green Wall and Middle East Wall being bolt free. The basalt pillars are perfectly vertical making Vantage a pumpy place to climb as there are fewer resting ledges however just about every climb is single pitch routes where a 60 meter rope is more than sufficient. These vertical pillars boast alternating traditional crack routes and bolted arete sport routes. This area was carved out by erosion during the last ice age and subsequent carving of the pillars occurred during the Lake Missoula floods that followed the retreat of the ice some 12,000 years ago.

The history of rock climbing in Vantage dates back to the early fifties. The first climbs were done in the Feathers area and at Zig Zag Wall. Traditional climbing was readily developed in the fifties, sixties, seventies, and eighties. In the late eighties and especially the nineties, the vast majority of new routes here were bolted sport climbs. Many face climbs, which fill in the large gaps between the good crack routes, were added at popular areas such as Sunshine Wall. On a map and in older guides, you will notice the area referred to by its proper name, Frenchman Coulee. However, the majority of climbers call this place as Vantage, due to its proximity to the small town with the same name.

There are three major areas in Vantage which are known as the Feathers, Sunshine Wall, and the Middle East Wall all of which have their advantages and perks. The sunshine wall is probably the winter cragging wall in the state of Washington as it is located east of the Cascade Range where it is warmer and has less precipitation and is also south facing which means the sun still hits the wall and warms the rock nicely even in winter. The wall is also protected from the wind so with all these taken into account, the sunshine wall is a great place to climb in late fall through early spring. During the summer this wall gets too hot and fewer people climb here. The King Pins section of this wall boasts the most classic crack climbs such as Air Guitar, George and Martha, and Pony Keg. The approach hike to the Sunshine Wall takes about 15 minutes and described in more detail below.

The Feathers area is a good beginners area which boasts many shorter and easier routes great for kids, families and beginners on lead. There are a bunch of short rock towers here with dozens of routes. This area also has the shortest approach and located within spitting distance to the camping area. The Middle East Wall is located to the north of the Sunshine Wall on the opposite side of the mesa right above the Vantage Road just west of the camping area. This wall is north facing and a popular wall in the summer where it is more shaded and cooler on those 100 degree summer days.

Vantage has a good combination of sport and trad routes, and over 200 routes in the popular 5.10 range. Traditional climbing has come back into popularity recently, with many of the new routes at Green Wall and Middle East Wall being bolt free. When you visit Vantage, you will notice trail signs posted by the Frenchman Coulee Climber's Association or the FCCC. This group has been maintaining climber's trails built in 1998, erasing (and possibly re-vegetating) old social trails, & gathering litter. Please respect the area as it shows signs of overuse.

Vantage is located in central Washington just two miles from Interstate 90. When driving from the east or west, get off on exit #143 with signs for the Gorge Amphitheater. Turn north unto Silica Road and go approximately 3/4 of a mile until Vantage Road. Turn left here and go just over a mile to the main parking area. This place is where the vast majority of climbers set up camp for a weekend or extended stay. As a frame of reference, Vantage is 145 miles east of Seattle and 140 miles west of Spokane.

The Feathers climbing area near the parking lot

The most popular time to climb here is from September through November and March to early June. Part of the explosion in popularity of climbing here is due to the dry desert-like conditions. When it is raining or snowing in Leavenworth, it may be perfect climbing conditions at Vantage. For those that like the desert heat, a climb here during the summer rarely involves significant precipitation or crowds.

Below is a table showing a good idea as to how much climbing there is here.

Camping is allowed on the south side of the Feathers climbing area. There is currently no charge to camp, if you have your parking pass. Due to the huge surge in climbing popularity, a parking permit is now required here. The permit costs $12.00 and is valid for one year. The closest place to obtain it is at the True Value Hardware Store in Quincy which is about 18 miles away. The Wal-Mart in Ephrata, 35 miles away, also has them. There are now 2 outhouses provided at the parking area to help keep the area clean. Please use them.

Beautiful View from the top of Sunshine Wall

1. Do not chop any routes for any reason without first consulting with the FCCC.

2. Clean all new routes of loose rock before placing the anchor chains. When climbers see shiny new chains, it means the route is now open to climbing.

3. Do not retrobolt any routes without permission from the people who created the route and the FCCC. 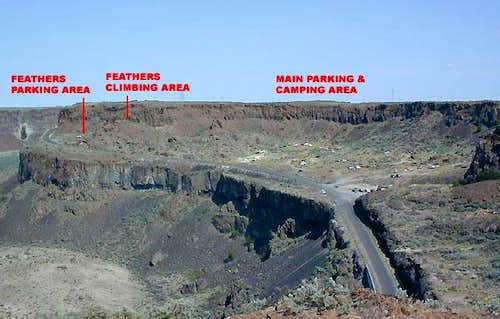 There is one significant downisde to climbing at Vantage, loose rock. Be aware that some routes have not been cleaned and rockfall can happen anytime. I would suggest wearing a helmet in locations such as M&M wall, where you stand right under the climbers.

Excellent Guide with lots of Information