Bumping Bumblies Bump in the night.

It was all set. My girlfriend and I had planned a great summer of cragging and camping. School was out and our plan was well underway. Until she dumped me and flew off to Norway for the summer instead.

Angry and reckless, I met some friends at Vantage WA to do some hard climbing. My frustration quickly phased into exhaustion as I beat myself up against the strenous climbing on the basalt walls and pillars. On the morning of the 3rd day I managed to fall out of the approach chimney to Sunshine Wall. I free fell to the rough path at the base of the wall, bounced over it, and tumbled down through the talus.

Hours later I sat alone in the hospital, reassesing my summer plans. Not only did I no longer have a climbing (and other things) partner, I now had a useless arm in a cast and was woozy from my nasty concussion. Guess leading hard 5.11 by the end of the summer was going to be put on hold.

4 weeks later, and after having hiked the West Coast Trail of Vancouver Island BC, as well as summiting a dozen Colorado 14'rs, all of it solo, I was on my way back home to Oregon. "May as well stop on the way and check out Arches, having never been there" thought I. My arm was out of the cast, but rock climbing was still impossible.

Did the tourist thing all day, including a hike of Devils Garden. I came out of Devil's Garden right at sunset. I was suddenly inspired to check out Landscape Arch in the moonlight, so grabbed a couple batteries for the headlamp and a Nalgene, and headed up the trail once more. 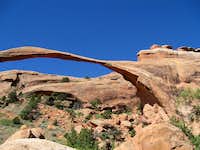 Came back out to the day area only parking lot at 10.30pm to see only my car and a small pickup truck with an overloaded canopy.

Went to fill the water bottle again, noticing about 30 little toads clinging to the water spigot for dear life. Looked up to see a girl lounging on the hood of the pickup. Wasn't sure if either sight was entirely real.

Gentleman that I am, I gently nudged aside the hydrating amphibians to access the water, and enquired the damsel as to her distress. It turned out that her two 'fellow researchers' were from NY, studying fossils for the summer. They had gone hiking together, but she had turned around as she was sick of the heat and, I hopefully detected, their company.

I commited to doing what I could to help this fair maiden, or in the very least, keep her company and protect her from ne'r-do-wells. Plus, one of the guys she had left had the only set of keys to the truck (and the canopy with all the camping goodies and victuals.) The night might get chilly.....

At around 2am we both decided that our tactics were failing in every way. She was bored and frustrated, and our feeble horn honkings and light flashings had not served as a beacon to guide the lost home. Somehow she trusted me not to enter into my vehicle, and all the comforts it provided.

This tale being from the annals of antiquity, it goes without saying that mobile phones were not at our disposal. So I glumly commited to driving out to some kind of pay phone to "contact the authorities."

Back at base camp, she had gratefully made use of my sleeping pad and surpisingly not so smelly sleeping bag. Soon the search and rescue team arrived. It consisted of a porcine aging ranger, and two skinny college girls with tiny shorts and big hiking boots. Surreal. They did have helmets and big lights so that made them seem somewhat proff.

As they were 'gearing up' lo and behold, the missing did appear. At least one of them. He came stumbling out the slots of Devils Garden looking like the only survivor of a 1950's Western movie. He couldn't walk in a straight line, his clothes were in shreds, and he didn't really seem to know what he was doing.

He ignored the S&R team, and headed straight for the truck, unlocked the canopy, and shotgunned two cans of warm pepsi on the spot. The conversation between him and the ranger, to the best of my memory:

Where is your buddy?

I dunno, I left him.

That FAT FUCK wouldn't come back with me so I left his sorry ass to die!

After we got lost, we made a fire 'cause we figured the chopper would see it.

It's illegal to make campfires without a backcountry permit or within a quarter mile of any...

Huh? Anyways, we were like, ya know, so thirsty. So we tried to drink from cactus but didn't have anything to protect our hands but our bandannas. So I tore up parts of my shirt here to protect my hands and peel off the skin of the cactus. But that didn't work.

Andy, that FAT FUCK, he kept whining and saying how thirsty and tired he was, and how he couldn't walk another step and on and fuckin on. I said to him, I said, ANDY, shuttup and listen to me. We'll stay by the fire and see if a rescue comes. And Andy says Ok.  But after awhile I start thinking hey, I can find my way out. But Andy, he won't do it. Stay by the fire, wait for the choppers is all he can say. But I say to him, Andy you lardass, come on and let's get outtahere. But Andy, he like, he just won't do it. So I say, Andy, I'm gonna leave your sorry ass out here if you don't come with me. So then he jumps me, there in the dark, and grabs my leg, and he won't let go. And he starts crying and carrying on, AWww Gawd, don't leave me to die!! Wait for the choppers! But I say fuck that you dumbass, there ain't no choppers, just us, and its not even that far. But he just grabs my leg, so I end up, like, kicking him til he falls off, and then I run. And he runs after me but has to turn around cause it's like seriously dark.  But I could hear him crying and falling down behind me.  He finally gave up and found the fire....I guess.

So then what happened.

So I keep crawling around, bumping into shit and rocks and cactus and shit, until I finally see some lights and hear a car horn, but then it stops, so i bump around for like for like forever until I hear you guys and see the lights from the campground.

At this point, he opens a water bottle and uses it to start washing down a can of pringles he's found.

Dawn begins it's relentless approach, and none of us are as interesting in the light of day after a sleepless night in the sand of Arches. The surprisingly efficient rescue team of 3 finds Andy in less than an hour, and guide him back to the parking area just as the first boatloads of tourists begin to disembark. His condition is unspeakable. Everything the first guy said about Andy is true. I say my goodbye's to the girl and wish her luck on her long drive back to New York. I didn't get her number.