We had been to the top of North Carolina three hours earlier and were in the middle of trying to break the record for the fastest completion of the Southern Six Pack (SSP), the highpoints of TN, GA, SC, NC, VA and KY in
winter. When we arrive at Grayson Highlands State Park ‘twas a little after noon.

For the past 30 hours, we had been hiking, climbing, driving and living on the road and in the mountains. The weather had allowed for us to simply fly through the trails and mountain highways—no matter the greatness of the view or multitude of hairpin turns—we stayed focused. Two summits left: Mt. Rogers and Black Mountain in Kentucky.

Although we were really fatigued from the road and hikes, we were very confident about Mt. Rogers. Again, really nice high 30s weather, only 8 miles of hiking roundtrip and no snow or ice in the parking lot. This would be a simple stroll.

From the lot we took the Rhododendron Trail to the Appalachian Trail. Our pace was slow, uninspired and lethargic. An older man in jeans passed us.

Two miles in and half way there we started looking around for the summit. Finally another hiker said we had another two miles to go. The weather really turned too.

Now it was just above freezing, raining and windy as shit. The worst weather in which to hike. Even the best shells get saturated over time and you sweat from within, adding to the moisture. It soon became a mountain monsoon and my pack cover blew off into oblivion (as shown in the video). 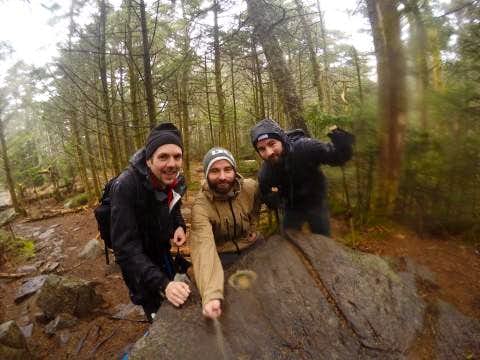 Deciding to turn it up, we completed the last two miles and summited in 45 minutes. On the descent, Travis decided to lead us down the wrong trail for some “new scenery.” Really did enjoy the ponies though. Even though they are relics like the bison at Yellowstone, it is nice, even in this sort of contrived sense, to see wild creatures in the wild. I guess it’s like watching a western. Neat to see a recreation of how things once were.

We got back to the car a little after 3 p.m. and began stripping the layers of soaked from our bodies and backs. The timing for this event was perfect. Because it was a state park, lots of people were around. In the car beside us there were a bunch of high school girls. And on they stared as we shivered down to our boxers.

The end was in sight—just one peak to go.

So awesome to be so far away from chains and big America. The capitalist entities have not penetrated the isolated mountain towns in the U.S. And that was by choice. No money it in. Poor people all around, surviving and living. That’s all. The stuff that happens in Washington and cop killings and fires and all the bullshit we see on the news, doesn’t affect them. Their lives won’t change. Too hard to corrupt them. Freedom in that isolation.

The weather would once again allow us to drive pretty close to the top, this time in Kentucky. So much of the logistics were handled by technology from the twins and the Millennial mindset. Always on the phones for routes, info, temperatures, forecasts, etc. (But when reception fades and batteries die, will understanding a paper map be a foreign concept?)

But nothing can be done to combat fog. Soooo much fog. And the Explorer headlights were pointed too far up, so even with the fog lights, we could only go five to 10 miles an hour. Had to get out and check the other side of a cresting hill, on a single-lane, full-of-potholes mountain road created and then destroyed by mining.

Then the thick fog walk through the mist to the summit marker. It was like Sassafras, but the fog shroud aloud us to believe in great views and glory through the black.

Back to the car—total time taken to complete the SSP in winter: 36 hours, 52 minutes and 30 seconds.