In early November, the Wasatch Mountains of Utah received a series of storms covering the central range in four feet of luscious, powder snow. For two weeks, the skiing was good; but a continuation of warm, dry weather reduced the snowpack to a stout sun crust over sugar. From a skiing perspective this was depressing, but for early season winter climbing it was phenomenal! Lesson learned: If the snow gods give you a lemon...climb it!

The North Ridge of the Pfeifferhorn (middle-left). 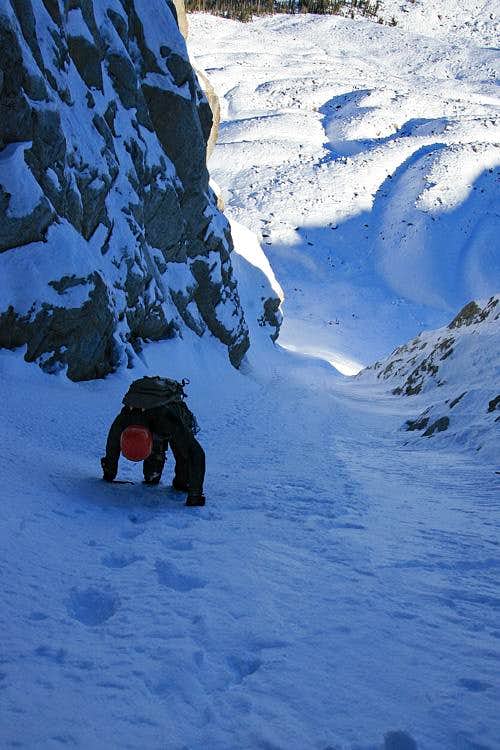 Pfeifferhorn poking above the forest.

Approaching the northeast couloir (Variation B).

The Lower Portion of the North Ridge

The northeast couloir maxed out around 50 degrees with a good mixed section. From this couloir we gained the north ridge. Brenton (fowweezer) began the climb through 4th class terrain. Although powder snow glazed many of the rocks, ample protection opportunities made the climb safe overall. 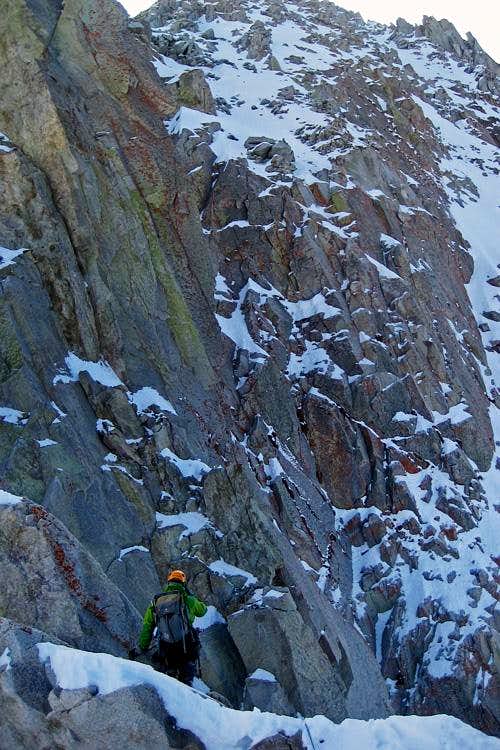 Matt (marauders) considering the options ahead, below the Lightning Bolt Crack.

Nearing the mixed portion of the northeast couloir (Variation B).

Matt (marauders) leading the mixed portion of the northeast couloir.

The snow glazed rock of the lower north ridge.

The first portion of good, bare granite along the lower north ridge.

The Middle Portion of the North Ridge

After some good 4th class granite, the middle portion of the north ridge provides a fun, exposed traverse across a granite slab that ends in a steep couloir down the northwest face of Pfeifferhorn. Initially the slab looks harder than it really is. There is a network of cracks that provides secure footholds. 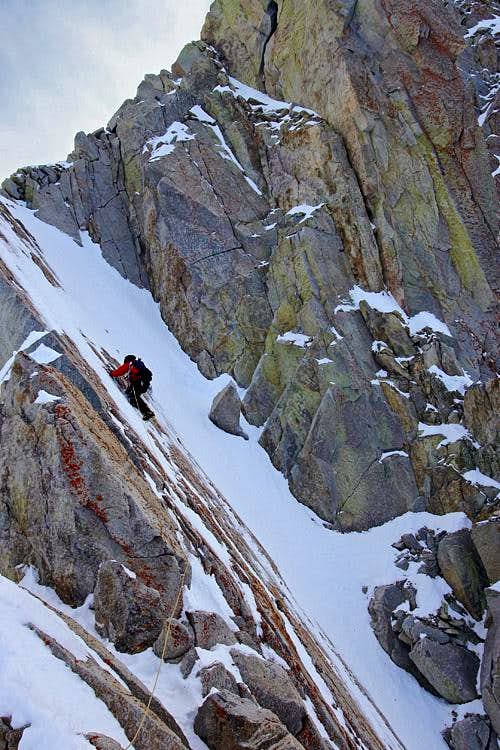 Looking down on the granite slab. Just don't look down while your on it.

Alec (PocketsOfBlue) making his way across the slab.

The Crux & The Summit

After the granite slab, the north ridge narrows substantially and is bisected by the Lightning Bolt Crack. The crack appears slightly overhanging, with minimal features. Can it be climbed? Definitely. But that's not my cup of tea. Instead we took the standard route to the east of the crack. This circumvention places you on the northeast face where the crux moves exist. The 5.3 moves are simple, but the steep terrain, snow, crampons and gloves give it some added spice. Why climb this in the snow? Well, the ridge is normally a loose pile of granite. So the snow and ice help hold the rocks together. Don't dwell on that too much as you look between your legs! 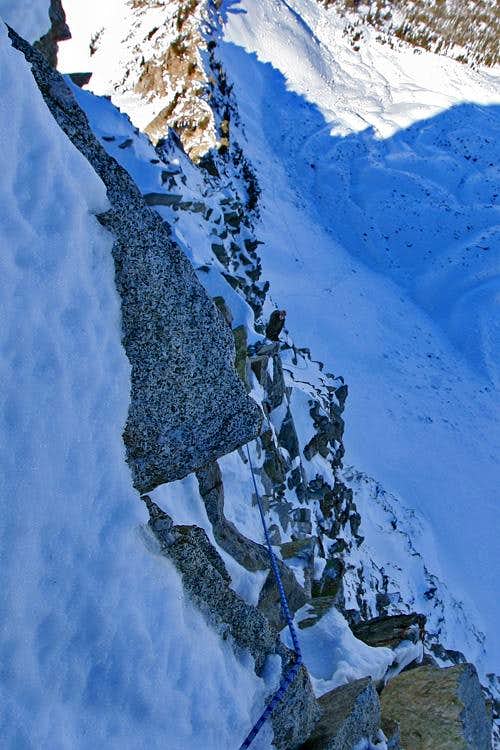 Brenton leading toward the crux.

Looking straight down the northeast face. So exactly which rocks are solid?

The last snow ridge to the summit.

Descending the east ridge of the Pfeifferhorn.

Few climbs have provided the full adventure and satisfaction of the North Ridge of the Pfeifferhorn.
Great weather, great conditions, and superb partners. Life is rarely this perfect. 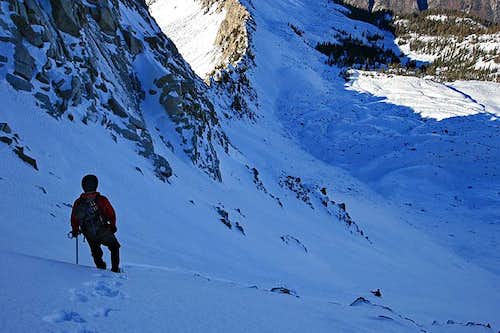 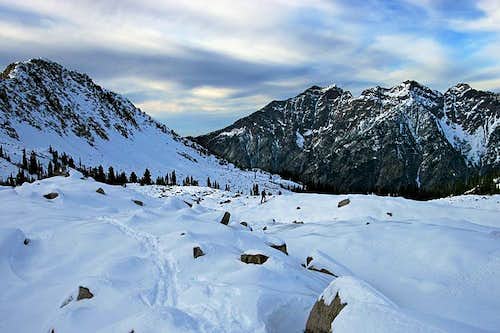 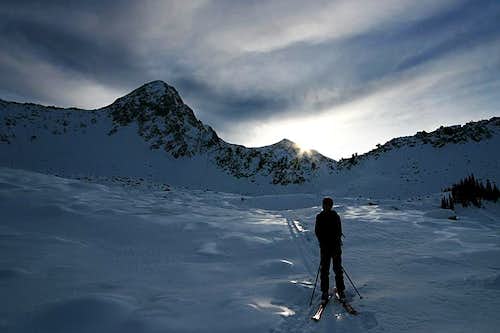 Alec and the sunset. 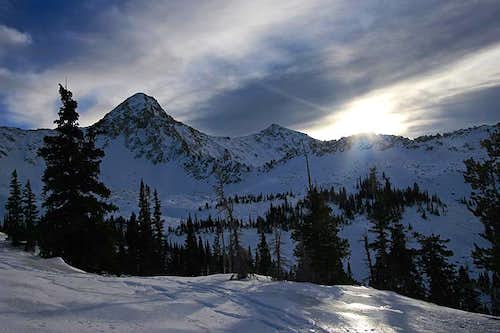 The North Ridge of the Pfeifferhorn.

That's all I can say: Wow. Nice going, you guys. A good example for all of us. Thanks.

I just love picturebooks stories! thank you for sharing these!

...everyone for the kind words.

Really great, the photos are amazing, you did such a good job.
Thanks for sharing!

awesome photos made me feel like I was on the route with you. Awesome job, well done!

We are all so lucky to have climbs like this in our backyard.

Kudos on an excellent climb!Plus you did a wonderful job documenting it with those excellent photos.

I loved your beta shots on this route, and I was mistakenly waiting for the sun to hit the east side of the ridge to get some cool lighting. Unfortunately, the November sunlight is far too low in the south sky. I'd like to hit the route again in March/April when the sun is a bit higher. I bet the photos would be even better.

Great photos, looks like a wonderful place to be. Well done!

Thanks! While the Wasatch is not a major alpine destination, there are definitely a few gems.

This is why I love SLC and the Wasatch. Great job, guys! I hope to climb the Pheifferhorn next Summer.

Excellent photo's
looks like a trip that will be hard to forget!

Wish I had come! I think you guys invited me on this one? I really missed out. Looked like the weather was really good!

Yeah, we'll get out again soon.