My partner Brian and I parked at the ranger station at Manzanita Lake. We were planning on climbing the Northwest Ridge of Lassen Peak with our friends Floyd and Roy who were coming in from another location. Those guys ended up having car trouble and made a separate summit bid. We left the trailhead at noon, snowshoeing up the closed road, past the gate. We snowshoed about 30 minutes up the road before cutting off towards Chaos Crags, more or less drawing a direct line towards the bowl mentioned in the route description. We reached the bowl in another 30 minutes.

From the bowl, we worked along the base of Chaos Crags towards Lassen Peak, trying to stay in the trees and out of any avalanche danger. Following the curve of the Crags, the terrain undulated up and down and we found the snow to be more or less ankle/calf deep. We stopped in the large flat area mentioned in the route description as the high camp area. We decided to go a little higher and aimed towards a small patch of trees just below the first rocky ridge of the route. We reached this patch just as the sunset at 5p and found a nice flat spot for camp. 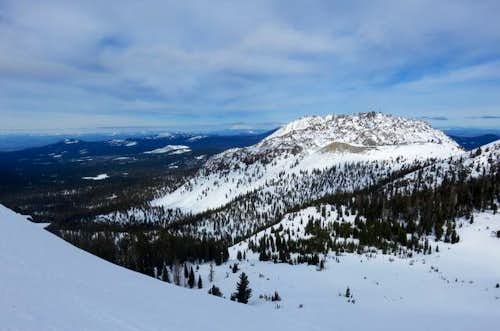 This photo, taken from the Northwest Ridge, shows the route along the base of Chaos Crags (along left side in this photo) into basecamp.
The hike in to high camp took us 5 hours. We weren’t trying to go super-fast, but the portion after we passed the Chaos Crags and up to camp, really cooked us pretty good. 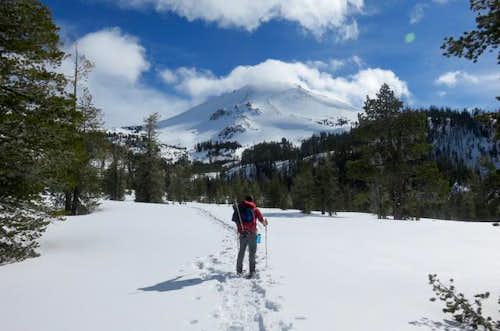 Here Brian is in the forested flat area just past Chaos Crags. In this image you can see our future camp location in the small patch of trees just below the ridge and the route proper.
After setting up camp, we cooked dinner, brewed up some tea, and melted snow for water the next day. We were lights out by 830ish.

The first climb up to the first rocky ridge was pretty steep and we found the snow to be a little soft.

We hit the top of the first rocky outcrop in about 30 minutes and then reached the pinnacles on the ridge after about an hour of climbing from camp.

We split the large pinnacles, following a steep snow ramp up. That part was pretty steep and icy and I was glad to do it in the dark and not see the runout below! 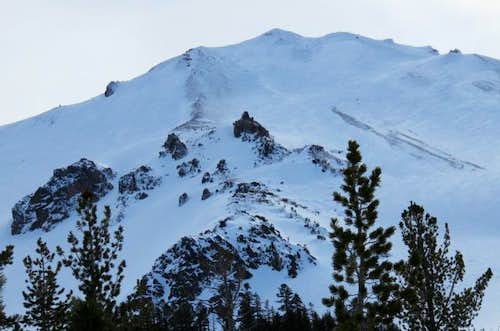 Northwest Ridge route. The route stays just to the left of the lower rock band. Splits the large rock pinnacles at mid height. Follows the indistinct ridge to the sky line ridge. Traverses up along ridge line to false summit. Down climbs a bit to access small crater which provides access to summit plateau and summit proper.
We came through that gap and then huffed it up the indistinct ridgeline, splitting time between the slopes on either side and the ridge itself, all depending on what snow conditions were like. The snow varied from knee deep snow to ice.

We hit the north ridge on the sky line at 730a, about 3 hours after we started. It was light at that point, still clear, and the wind up there was really cranking hard.

We walked up the north ridge to the high point and were stopped by the steep and rocky nature of the mountain. We hemmed and hawed at that point not sure what to do. We couldn’t see the actual summit from there so we weren’t sure how far we had to go.

From that high point, we looked down into the crater below and figured that must be the way to go. So we down climbed the rocky pinnacle on the northwest side accessing the crater on that northwest side. We then went through the crater and up the gap on the southeast side, between two prominent pinnacles. This part looked steep from far away, but once on it, the angle was fairly moderate. 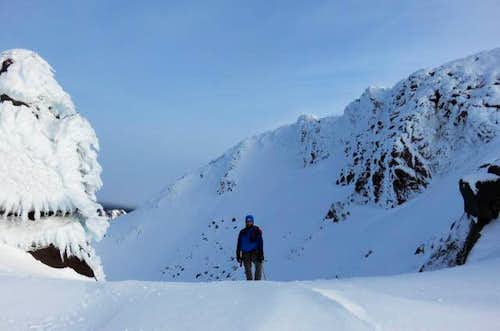 Brian coming up through the small crater and accessing the summit plateau. The peak on the right is the high point of the north ridge.
At that point the clouds started coming in fast, and we luckily got a glimpse of the actual summit to the south, before it became a total white-out. From this initial crater, we went along a second crater and then to the summit pinnacle from the north side, up a moderately angled wide slope. From the high point on the north ridge to here took about an hour. We summited at 830a.

The summit was FREEZING and hyper windy. It was ~20 deg and blowing ~20-30 mph. Brian’s beard froze; my trekking poles and ice axe became fully encrusted in ice. It was awesome up there. All the summit pinnacles were encrusted in rime ice. 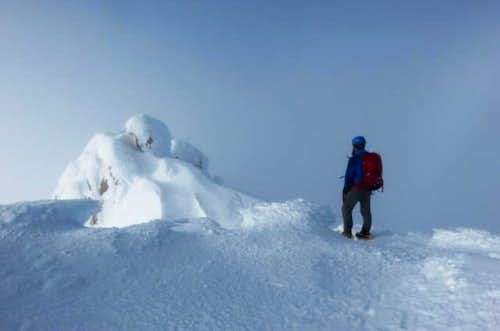 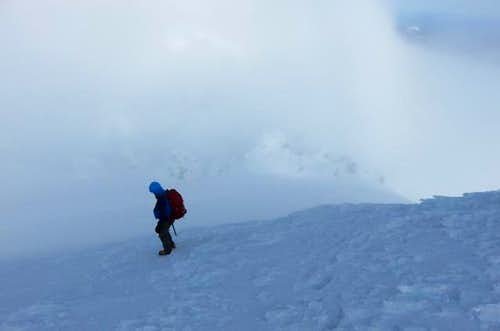 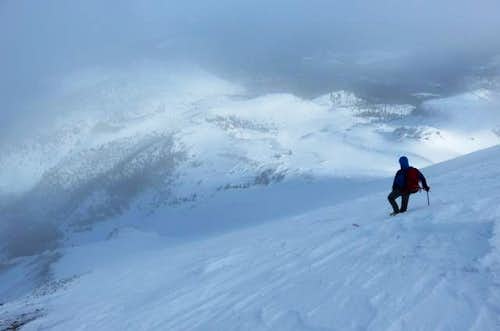 Brian plunge stepping down the snow slope adjacent to the indistinct portion of the Northwest Ridge route
We split the pinnacles again and then plunge stepped our way down the final steep snow slopes into camp, which we reached at 1115a.

Camp was broke by noon and we followed our tracks out back to the car, which we reached at 230p.

Overall, we felt the route a great one for a winter ascent. It has just the right amount of beauty, exposure, and isolation.