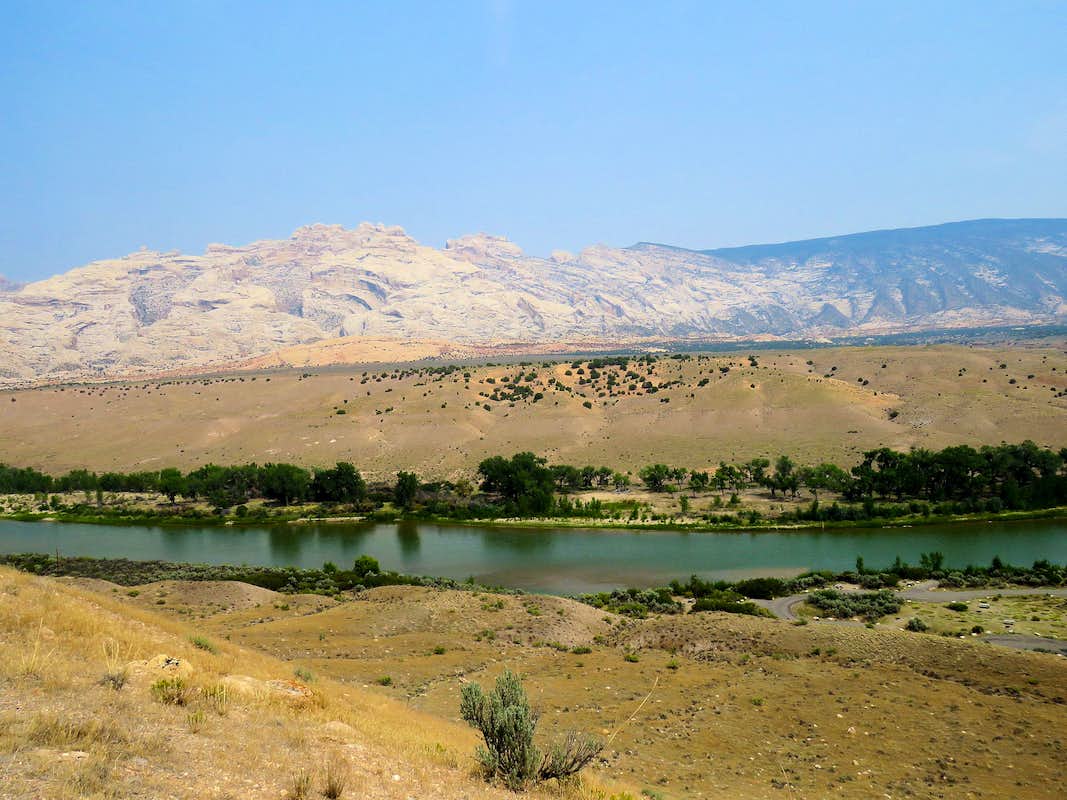 
Green River carves a 2500 ft deep canyon in Utah’s Dinosaur National Monument near the border with Colorado. The northern wall of the plateau is known as Split Mountain (North). I had read about and seen photos of the spectacular views from the top of Split Mountain (North).Looking at Google Earth, it had occurred to me that equally spectacular views could also be had from the top of the southern wall of the canyon at the northwestern corner of Yampa Plateau where the plateau tapers to a white rock peninsula which create jagged peaks. By looking at satellite photos, I had come up with a path to take me from Josie Morris Cabin in Dinosaur National Monument, 2 miles on the desert floor and then 2000 vertical ft up the slopes of Yampa Plateau to my desired view point. A month before my trip, I traced the path on the map and entered it into my GPS.

A couple of weeks later I noted that Summitpost member Scott had already made a page for this area under the name “Split Mountain South” (referring to the white rock jagged peaks). While his suggested starting point was different than mine, it was interesting that his path to the top of the Yampa Plateau was the same as what I had come up with on my own.

After a 40 minute drive from Dry Fork, Utah, I was in Dinosaur National Monument just around sunrise at about 7 a.m. It was very hazy/smoky. The full moon appeared as a bright orange disk in the western sky. The jagged pinnacles of South Split Mountain came to view in the haze. Drove to the end of the road at Josie Morris Cabin parking area (elevation 5360 ft). No one was there. I did not see any other people until the end of the day when I returned to the same parking area.

Started my hike at 7:30 following the path that I had entered into my GPS. Backtracked on the road 0.3 miles to where satellite photos had shown a beaten path that did not appear on any map. There was no sign of a trail from the road but once I left the road and went 20 feet or so, a well beaten path appeared. The white rock pinnacles of South Split Mountain came to view. I was mesmerized by those spectacular peaks and kept looking at them all day long. In my mind, I kept referring to them as The Grand Tetons. The pinnacles of South Split Mountain

For the next two miles, I followed the path northwest on the desert floor at the base of the slopes of Yampa Plateau to reach where I wanted to climb the slopes. The path faded away at times but it always appeared again. Desert shrubs and colorful hills created a beautiful environment. Hog Canyon and Elder Spring Canyon created rocky trenches in the slopes of Yampa Plateau. The canyons were in the shade at that hour. Left the picture taking for the return trip. Two sandstone hills near my path. Getting closer to the peaks of South Split Mountain. The path went up some red hills to around 5480 ft then began to quickly descend. Going down the red hills

Once I was down to 5320 ft at around 8:20 a.m., my GPS indicated that I had reached the base of the slope that I wanted to climb. The slope was not particularly steep but it was a relentless 2000 ft vertical uphill. I was already feeling hot. Forecast called for a high temperature in the low 90s degrees Fahrenheit. I was getting concerned that climbing that slope in those temperatures would probably not be a smart thing to do but I assured myself that at that moment, it was probably no hotter than 70 degrees and that I had 3 liters of water.

Made a 90 degree turn and began to hike directly up the slopes which had a sparse forest of Juniper trees. While I became drenched in sweat, I was encouraged by my fast pace of ascent when I noted that in only 30 minutes, I had already climbed 1000 ft up. Since I was heading northeast and the sun was still in the eastern sky, many places on the slope were still in the shade. The two sandstone hills I had earlier seen were now visible way below on the desert floor.

As I made it to 7000 ft, the slope eased up and the juniper forest became much denser but I could still for the most part, hike easily among the trees following the path that I had drawn in my GPS. Finding my way in the juniper forest

I knew that I was approaching the edge of the plateau and a spectacular view would soon appear. I was still blown away when I finally reached the edge at 9:50 a.m. and 7280 ft elevation. Below me, walls and steep slopes dropped down 2400 vertical feet to where Green River ran. The colorful walls of North Split Mountain rose on the other side. The haze and smoke made things blurred. After enjoying the view and having my sandwich in the then cool shade of the trees, I headed west in the forest going toward another view point that I had chosen. The tips of the pinnacles of South Split Mountain rose above the trees. The pinnacles of South Split Mountain

Views from the second view point.

Zoomed views of the pinnacles. Left at 10:30 and began to hike back in the juniper forest. blurred in smoke and haze

I was then hiking down the slope I had climbed. While it was warm, did not feel crazy hot. Could not get my eyes off of those pinnacles. (Took many more pictures than what I have posted here).

Down the slopes and onto the path in the red hills.

Hiking back toward the parking area on the red hills. Looking back at the slope I had climbed and descended. A short area of bushwhacking at the outlet of Elder Spring Canyon.

Got back on the road and reached my car at 1:00 p.m. A few cars and people were then in the parking area. Hog Canyon from near the road.