In Zalipnik valley
This is a very different page. A page about humble, rounded mountains. But also about the area of mesmerizing, archaic flair and exuberant flora. Every mid May we for sure do a trip there to pay a tribute to mother Nature. Because then this unique patch of prairie, the only one in Slovenia, is the one representing Heaven on Earth.

Several streaks are forming the mountains of Čičarija, belonging to the Maritime Belt of Dinaric Alps. As all others, they are predominantly running in the NW-SE direction. Our area starts on the NW, where two streaks of hills are rising out of the Podgorski Kras plateau. These two streaks are surrounding a shallow, relatively high valley of Zalipnik (the area 'behind Lipnik hill'). More towards the SE the streaks join and in continuation only one ridge goes to the summit of Žbevnica, the highest point of the area. Further to the SE a bit lower, hilly plateau of Čičarija continues, only later resuming altitudes above 1000 m.

Istria is quite a big peninsula, so these hills, being in its center, have a character more of an inland than of maritime mountains. In contrast to the more distant past, today this area is quite depopulated. In the small villages surrounding the hills, the number of inhabitants is constant, rather than increasing. Also roads are just good enough to serve the local needs, tourists can use on the mountains only weak cart roads. These are a challenge for some intrudor motor bikers, for mountain bikers and very convenient for hikers.

Now let's list some key summits. Their description is not needed, as they are all alike: Rounded and mostly grassy, rocks are appearing only rarely. The northern slopes of the massif are covered with nice woods. Let's go from the SE towards the NE: 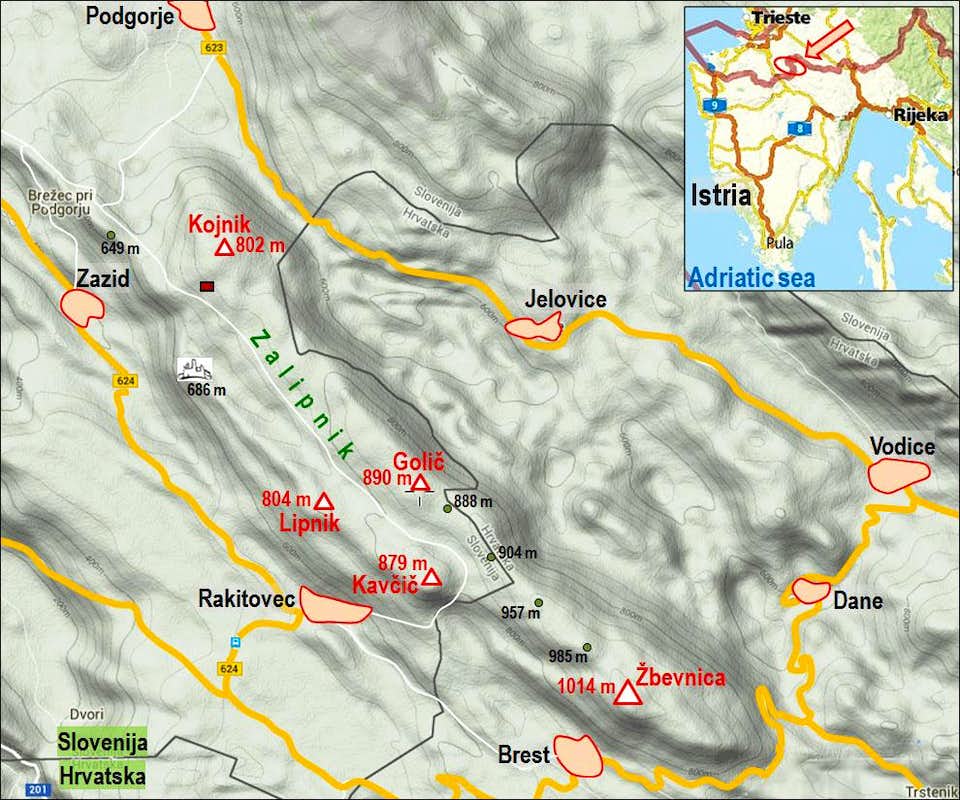 From the road, connecting Croatian villages of Brest and Vodice, the ridge soon reaches Žbevnica, with 1014 m the highest point of the area. Then it continues on Point 985 m and on Point 957 m (Špičasti vrh), near the border with Slovenia. Further to the NW this ridge continues to the ridge of Golič (the northern branch) and towards the west it branches on Kavčič (the southern branch). North of Žbevnica ridge there is a broad, hilly area, which is overgrown with woods and less attractive for hikers.

The next elevation NW of Špičasti vrh is Point 904 m, then comes Point 888 m and then the very popular summit of Golič, 890 m. In the same direction the ridge then lowers on Point 865 m and then on a broad saddle below Kojnik, 802 m. This broad hill is the last one in the streak and is already quite overgrown with gnarled trees. But it still offers some nice scenes and views around.

Just west of Point 904 there is the saddle towards Kavčič, 879 m. This saddle is the highest point of Zalipnik valley. Towards the SE and S Kavčič has some short rocky walls, all other sides are grassy and gentle. Towards the NW its ridge goes on the summit of Lipnik, 804 m, then it lowers considerably and also gets overgrown with woods. Next elevation is 686 m high Majbrma. With its rocky wreath it appears unusual from the distance, but when you get on its top, you realize that those rocks must be remains of ancient walls. As on so many hills in Istria, it looks that also on this one in times of Antiquity there was a fortified castello. I guess the place is archeologically still unexplored. In continuation this mountain streak gets less and less attractive, but on many places it is sending towards the SW short, rather steep rocky walls. Far away, above Podpeč and Črni Kal they become quite impressive and also very attractive for harder climbing. But that's already another, more remote area.

It may well be that the valley of Zalipnik is the most attractive part of the whole described area. It is karstic, dry, but in many shallow small basins there is some more fertile soil, so there you will find many wild flowers growing. It all looks like nice gardens. And in the past there were indeed some man-made gardens, you recognise them being surrounded by dry stone walls. Today the whole area is not exploited any more, the land is returning to wilderness. No sheep, no people, not a single hut. From below Kojnik a cart road is coming into the valley (from Podgorje), and then, rugged, but only gently rising, it is crossing the saddle between Point 904 (or Golič, 890 m) and Kavčič, 879 m. 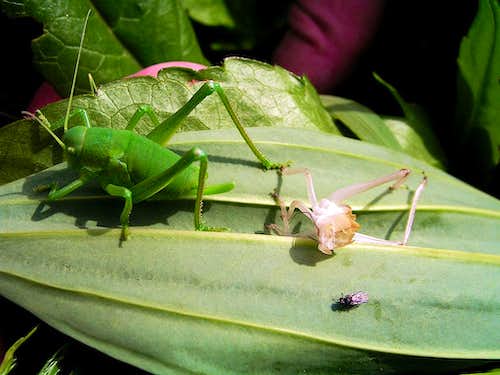 On the hills you will encounter many birds. Larks (alaudidae) are abundant and very noisy, time to time you will see also birds of prey. But in the graslands also many species of bugs and butterflies are living. Bigger animals are more rare. You can see a deer, feeling uncomfortable, as it can't get hidden. And in some overgrown basins you'd find traces of wild boars. But only traces. Unless you're lucky as Jasmina was once, meeting a nicely aligned troop of mother wild boar and some eighy piglets in 'pyjamas'. Luckilly, Jasmina was in a car.

Now here I'm feeling incompetent even before starting to write something. Yes, flowers of Zalipnik valley and the hills around! It's them impressing you the most when you visit the place. They all grow wild and through seasons their portfolio is changing very much. I feel here that it's best if words leave their place to pictures... 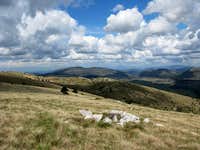 SE views
From Žbevnica and other summits, nice are the views towards SE on the rest of Čičarija mountains and on Učka. Towards the NW the summits of Slavnik and its neighbours are rising. In a clear day the coast around Koper can be seen and nice are also the nearby valleys and villages. Towards the south interesting are the closest karstic plateaus, like Raven Kras and others.

Coming from Slovenia, you exit the Ljubljana - Koper Highway either near Kozina or near Črni kal. The two approach roads are:

1. Kozina - Prešnica - Podgorje. Passing through Podgorje village, you can take a macadam mountain road which deters right at football place (the sign allows it only for local traffic). On main branchings keep left and you will come high on the southern slopes of Kojnik, where you park - before the road turns into a cart-road.

2. Črni kal - Podpeč - Zazid, 387 m - Rakitovec, 533 m. This asphalted road goes by the lower terrace. You best starts hiking in the last two villages. From Rakitovec you can drive also across the state border to Croatia.

Coming from Croatia, the most convenient is the road: Buzet - Brest - Dane - Vodice. You best start hiking in Brest, 693 m, or higher on Žbevnica slopes (on 760 m). Coming from the east, so across the plateaus of Čičarija, is less convenient.

Hiking those mountains you can go anywhere. Combining marked paths, cart-roads and going simply across grassy slopes you can do different itineraries. Below are just a few suggestions. 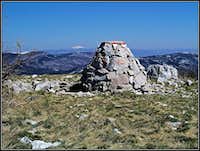 On Žbevnica
1. Žbevnica from Brest. That's a short and easy round tour, following two sections of the marked Istrian Mountaineering Path (IPP). We ascend by IPP-105 and descend by IPP-106. 1 hour for ascent. From Brest, 693 m, we go towards the (closed) mountain hut Žbevnica, 851 m, and further on top. We descend by the marked trail towards the NE and then E down on the main road between Brest and Dane.

2. Sakoman's Trail. This marked path follows all the time the ridge Kojnik - Golič - Žbevnica. We start on the cart-road below Kojnik (some 660 m), then ascend Kojnik and follow the whole ridge towards Žbevnica. Some good 2 hours till there. We can return by the ridge back to Špičasti vrh (Point 957 m), then cross on the saddle below Kojnik and by Zalipnik valley back. Oficially crossing the border is not allowed without the permit of both (Croatian, Slovenian) policies. But there's only a little chance that somebody will check you.

Hiking by the ridge of Golič 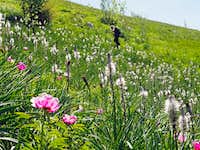 Below Golič
3. Around Zalipnik valley. This is the route we do almost every year in May, revealing all the beauties of Zalipnik valley. Many variants are possible. From below Kojnik (some 660 m) we follow the cart-road into Zalipnik valley. In the middle of it we deter right (pathless terrain) and ascend directly southwards on Lipnik, 804 m. The alternative till here is to catch more in the beginning a weak cart-road towards Majbrma, 686 m, and continue on Lipnik by the main ridge. From Lipnik we usually go on Kavčič (pathless, crossing the saddle, 45 min). From Kavčič, 879 m, we go by the marked path northwards and from the valley continue in the same direction on Golič, 890 m. Then we return by the main ridge towards Kojnik, or across the slopes (many flowers there) to the parking place.

4. On Lipnik from Zazid, 387 m, or from Rakitovec, 533 m. That's even a shorter access to Lipnik, but we must do more altitude difference.

5. Zalipnik valley by bike. This is very nice, by mountain bikers quite popular round tour. It does not cross the state border and is quite steep in some sections. The most convenient summit to add is Kavčič. We start the tour in Zazid (or elsewhere if we plan a longer circle). A narrow mountain road goes steeply northwards, crosses the railway near Brezec pri Podgorju and ascends on the ridge. In the woods we deter right and follow a rugged road till below Kojnik (from the left the road from Podgorje joins). Then we continue up into Zalipnik valley, where the road turns into a weak cart-road. In the SE direction we ride up the shallow valley on the saddle below Kavčić. There the cart-road starts descending and turning southwards. Around Kavčič we descend steeply to Rakitovec and continue by the asphalted road to Zazid.

Even if the terrain is grassy and looks easy, don't come only in sport shoes. For crossing grassy slopes good hiking shoes are needed and poles are very recommended. Mind having enough to drink as there are no water sources.

The whole area is part of Natura 2000, a network of nature protection areas in the territory of the European Union. Some 10 years ago there was an initiative to build on the ridges wind power plants. Deceiving studies were justifying those intentions, but luckilly the area remained protected. But we all know such decisions are lasting only till another strong liar comes with the idea to earn some money through destroying nature.

Below Žbevnica there is a mountain hut which is recently closed.

The area can be visited any time of season, but by far the best time is around mid May. Regarding flora also in early summer you will not be disappointed. Autumn can be also nice there and in winter you can visit the place, having in mind that snow can fall on those hills.