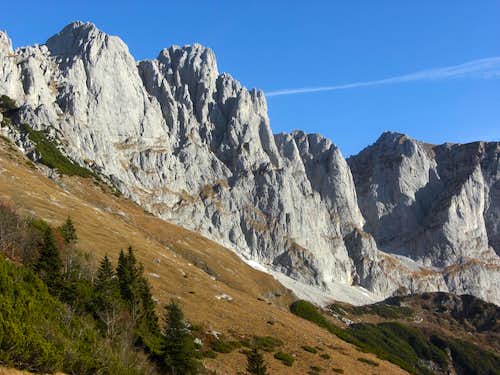 The most prominent summit of eastern Wilder Kaiser is by far Ackerlspitze. It is a compact rock mass peaking clearly its surroundings. It is therefore, next to Ellmauer Halt, which is the highest peak of Wilder Kaiser, the most popular summit of Wilder Kaiser. So do expect people on that massive peak.

Ackerlspitze stands within the main ridge of Wilder Kaiser outstripping all surrounding peaks, spires and summits. To the west are standing Hochgrubachspitzen, to the east huge Maukspitze, the very dominating but over 100 meters lower east end of Wilder Kaiser. Hochgrubachkar and the steep slopes down to Regalm and Going define Ackerlspitze to the south, to the north the huge and beautiful Griesener cirque with Fritz-Pflaum-Hütte is attached to the main ridge with Ackerlspitze.

I do have some favourite mountains within Wilder Kaiser range: Ackerlspitze is number one. The unbeatable views from this high lookout, the varied southern normal route with its interesting and not so easy rock scrambling parts, the possibility to add Maukspitze or to do a south - north summit traverse, the warm sun in the south faces even late in the year and a sort of “out of touch with the real world” - feeling when traversing isolated Hochsessel cirque up to high Ackerlschneid and climbing the summit block - that is what makes Ackerlspitze unique.

The first ascent of Ackerlspitze was on October 1st, 1826 by Peter Karl Thurwieser, J. Carl and the guide Stephan Unterrainer. 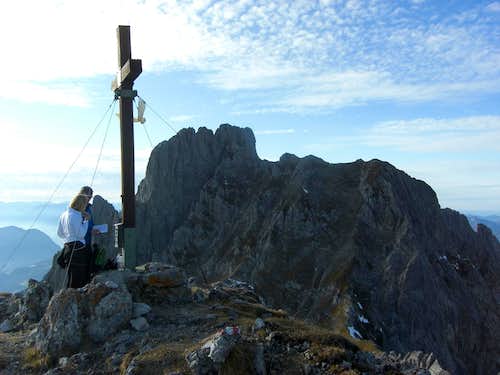 The nearest railway stations are Kufstein, Wörgl or Kitzbühel.
Look for the ÖBB scheduels here. The bus connections can be checked here.

From Wochenbrunner Alm take the supply road (trail number 812) up to Gaudeamushütte. Follow the trail via Baumgartenalm, Freiberghaus and Ackerlhütte. After Freiberghaus you reach “Brennender Palfen” (or Pölven), a meadow col with a cross on your right (and with a fantastic view to the Kitzbüheler Alps). Turn left and ascend to Wildererkanzel on the Gildesteig. Above Wildererkanzel take the right hand trail at a trail junction and traverse the steep south slopes (with some fixed iron ropes) to Westliches and Östliches Hochgrubachkar an to the site of "Alte Ackerlhütte".

Follow the forest road (trail number 813) until you reach a road junction. Take the forest road on your right up to Regalm. Take the right hand trail up to Ackerlhütte and to Östliches Hochgrubachkar, where you meet the Wochenbrunner Alm ascent route.

Follow the trail E4 in the direction to Stripsenjochhaus to a trail junction. Take the left hand trail which zigzags up to Großes Griesener Tor and Fritz Pflaum Hütte.

East of the hut follow the summit trail to Ackerlspitze through the northwest face of the mountain (rock scramble, easier than the southern route but longer /earlier snow and ice).

I took the following routes and the UIAA grades from Klettern im Kaisergebirge of Markus Stadler, which gives, in my opinion, a very good overview of the many climbing routes of Wilder Kaiser. For more information go and buy the still available mountain guide Kaisergebirge extrem, which is mentioned in the Map & Guide Book - section of this page.

Ackerlhüttenturm and Waxensteinturm, two rock spires west and southeast of the Ackerlspitze south face do have more climbing routes.

The summit and all routes are lying within the nature protection reserve “Kaisergebirge”. There is no entrance fee for the area. All plants and animals are strictly protected. There may be more restrictions, e.g. of camping, fire, firearms, noise, littering.

Please respect the protected area and stay on the trails - as long as it is possible (off-trail ascents to climbing routes).

All kind of accommodation can be found at 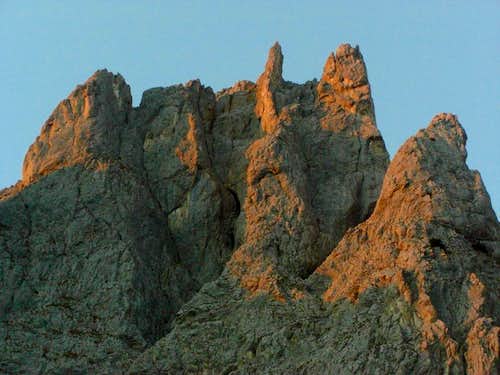 Ackerlspitze is a late spring, summer and autumn tour. Due to the extreme southern exposition of the normal route, an early spring or late autumn ascent can be possible.

Ackerlspitze need full hiking equipment and good shoes. A helmet is recommended. For the less experienced a rope for some belay can be useful.
Ackerlspitze needs climbing abilities up to UIAA grade I and II / II+. There is one difficult rock face between Niedersessel and Hochsessel; a steep and exposed south face of about 30 m which can be rated II / II +. There are some fixed iron grips at the most difficult parts of the ascent but you need to manage this terrain. With wet, snow or icy conditions this rock face can be really difficult.

Furthermore you have to deal with exposure in steep terrain (Ackerlschneid, Ackerlspitze summit block: UIAA grade I).

As the traverse of Ackerlschneid and the summit block ascent is on the northeast side of the mountain watch out for snow and ice conditions in spring or late autumn. 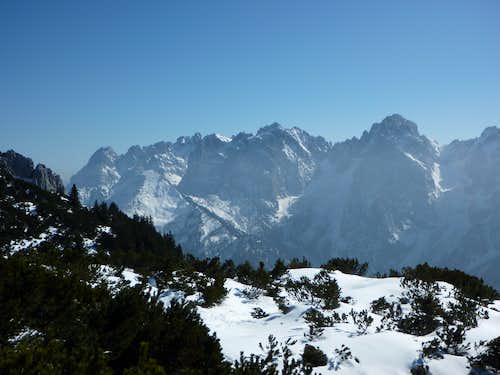