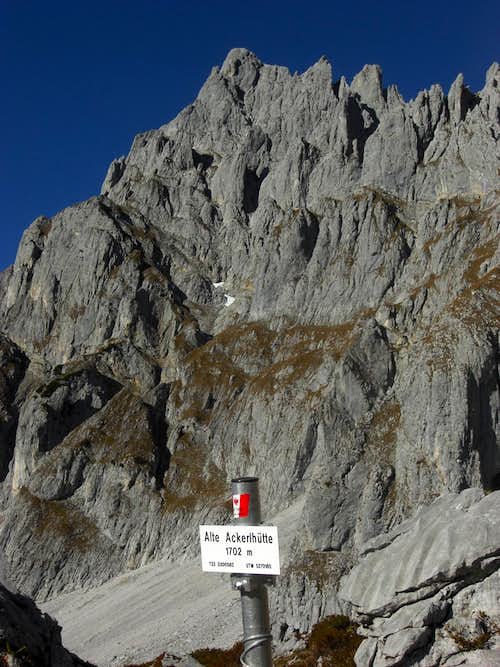 The many towers, turrets and spires between Ackerlspitze to the east and Kopftörlgrat to the west give Wilder Kaiser an aspect of the Dolomite mountains. Among these numerous peaks Regalmwand and the neighbouring, slightly higher Regalmspitze are the easiest accessible summits for “normal” mountaineers and “non-climbers”. Regalmwand, also called Regalpwand and Regalmspitze, likewise called Regalpspitze, do have their similarities and their contrasts.

Regalmwand and Regalmspitze are two summits within the main ridge of eastern Wilder Kaiser. To the north there is the huge Griesener cirque with Fritz-Pflaum-Hütte, to the south steep slopes drop down to “Brennender Pölven” (or Palfen) and to the valley ground. To the east the higher Hochgrubachspitzen and Ackerlspitze are dominating the scene, to the west there are Törlwand and Törl, an impressive notch between two perpendicular rock walls which looks a bit like a little brother of the famous Brèche de Roland in the Central Pyrenées.

Despite of being by far not among the highest peaks of eastern Wilder Kaiser - Ackerlspitze, the most prominent peak in this part of the mountain range is more than 100 meters higher - both summits are nevertheless an interesting and satisfying undertaking. The normal route to Regalmwand involves some nice rock scramble up to UIAA grade I / II in quite exposed terrain. Regalmspitze is more demanding, the traverse from Regalmwand requires climbing abilities up to UIAA grade II+ in sometimes bad rock.

The south slopes of Regalmwand can be snow free very early in the year or quickly after some autumn snow. In addition the southern routes are direct ones which are not very time consuming. So Regalmwand can be an ideal mountain for late autumn or late spring. Besides that the views from the summit are just breathtaking.

There is only one minus point: Regalmwand summit ridge is so narrow you will hardly find a comfortable place for a summit rest ................ 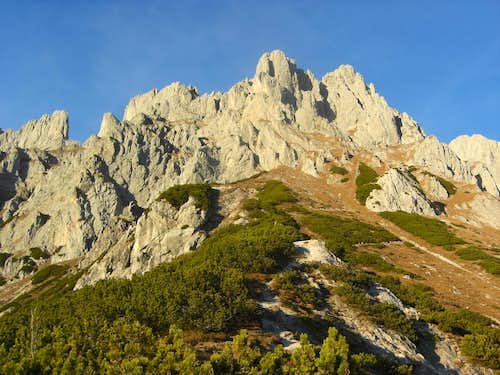 You reach the trailheads

The nearest railway stations are Kufstein, Wörgl or Kitzbühel.

Look for the ÖBB scheduels here. The bus connections can be checked here. 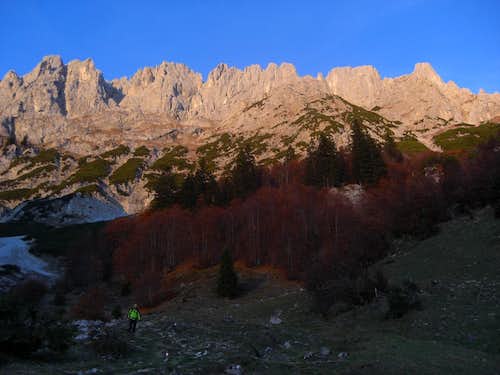 Alpenglow on Wilder Kaiser, Regalmwand and Spitze on the right

From Wochenbrunner Alm take the supply road (trail number 812) up to Gaudeamushütte. Follow the trail via Baumgartenalm and Freiberghaus and Ackerlhütte. After Freiberghaus you reach “Brennender Palfen” (or Pölven), a meadow col with a cross to your right (and with a fantastic view to the Kitzbüheler Aps). Turn left and ascent on Gildensteig to Wildererkanzel. Above Wildererkanzel take the left trail (Gildensteig) at a trail junction and ascend steeply in the direction to Törl, until you arrive at a memorial plaque some 100 meters below Törl. Turn right on the route to Regalmwand (signpost, description see below).

Follow the trail E4 in the direction to Stripsenjochhaus to a trail junction. Take the left hand trail which zigzags up to Großes Griesener Tor and Fritz Pflaum Hütte.
Alternatively take trail number 815 between the parking areas of Fischbachalm and Griesener Alm to Kleines Griesener Tor and Fritz Pflaum Hütte.
After the hut follow trail number 815 up to Törl. At Törl descent some 50 m to 100 m to a memorial plaque and turn left on the route to Regalmwand (signpost, description see below).

Some 50 to 100 m below Törl, there is a memorial plaque and a signposts to “Regalmwand”. The routes from all trailheads meet there. Follow the marked but not secured route up to a first chute, through that chute to some rock meadows, through a second chute (UIAA grade I) to a steep ascent to the summit notch and up the north face of the summit block (UIAA grade I+, some say II, about 5 meters) to the exposed summit.

For Regalmspitze follow the narrow ridge of Regalpwand, descend on bad rock on the north and then on the east side to the notch between Regalpwand and Regalpspitze (UIAA grade II) and climb Regalpspitze first on the west side then on the north side (UIAA grade II+, rather complicated route, not marked, only some cairns). This description I have found in the internet (see the German version below); I was only on Regalpwand. The traverse should take about half an hour and is only for experienced mountaineers.

I took the following routes and the UIAA grades from Klettern im Kaisergebirge of Markus Stadler, a page which gives, in my opinion, a very good overview of the many climbing routes of Wilder Kaiser. For more information go and buy the two volume guide book of climbs within Wilder Kaiser of Markus Stadler or the still available mountain guide Kaisergebirge extrem, both books are mentioned in the Map & Guide Book - section of this page. 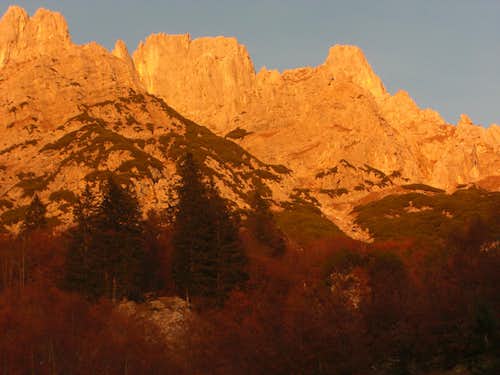 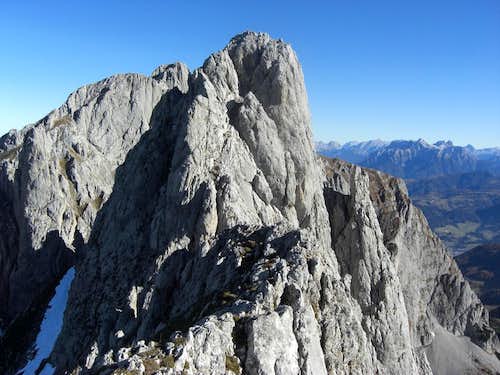 The summit and all routes are lying within the nature protection reserve “Kaisergebirge”. There is no entrance fee for the area. All plants and animals are strictly protected. There may be more restrictions, e.g. of camping, fire, firearms, noise, littering. Please respect the protected area and stay on the trails - as long as it is possible (off-trail ascents to climbing routes).

All kind of accommodation can be found at: 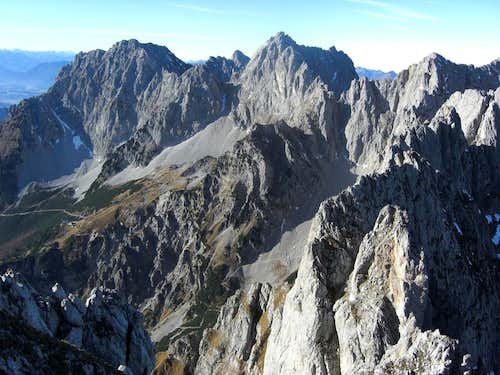 Regalmwand / Regalmspitze is a late spring, summer and autumn tour. Due to the extrem southern exposition of the normal route an early spring or late autumn ascent can be possible, depending on snow conditions.

Regalmwand / Regalmspitze needs full hiking equipment and good shoes. A helmet is recommended. For the less experienced a rope for some belay can be useful.

Regalmwand needs climbing abilities up to UIAA grade I+ , Regalmspitze up to grade II in bad rock. The most difficult parts to Regalmwand (with good conditions I+, with snow or ice II- to II) are very short (about 3 to 5 m each). You have to deal with some exposure in steep terrain. The summit block scramble, the summit of Regalmwand and the traverse to Regalmspitze is very exposed. As the summit block ascent is on the north side of Regalmwand watch out for snow and ice conditions in spring or late autumn. 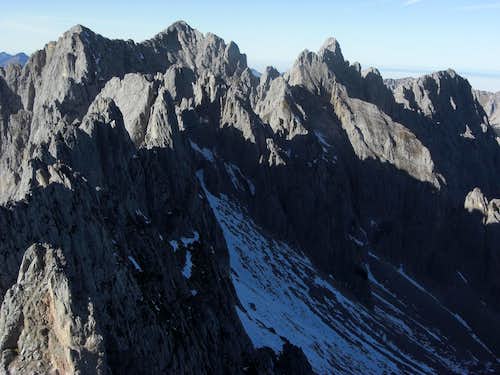