An Unspeakable Day in the Wasatch Mountains: Photo Trip Report.

Considered a Wasatch classic climb, the south ridge of Mt. Superior lies directly north of the Snowbird Ski Resort. In the summer, the south ridge is a spectacular climb, which is mostly 4th class and a few sections of low 5th class rated at 5.3. Under snow cover, the route becomes more challenging as you climb 55-60 degree snow, negotiate cornices that swallow the ridge proper, and search diligently for good protection. Overall the ridge is a magnificent climb in superb surroundings. This one comes highly recommended! 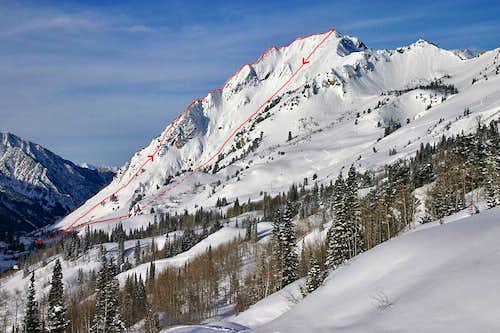 Our ascent up the south ridge and descent down the south face of Mount Superior. 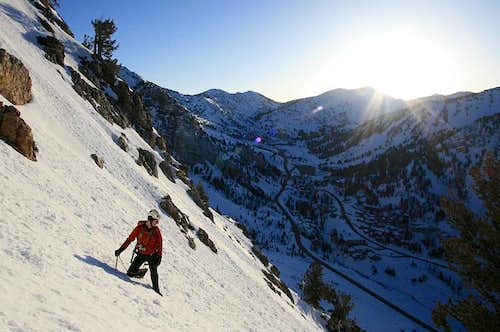 Glenn enjoying the sunrise on the lower slopes of the south ridge. The majority of the initial slope is between 30-40 degrees. As the slopes funnels to create the first narrow section of ridge, the slope max is roughly 50-55 degrees. 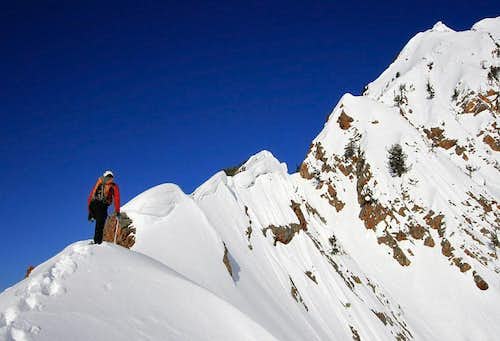 Atop the initial slope, we gained our first view of the majority of our route. 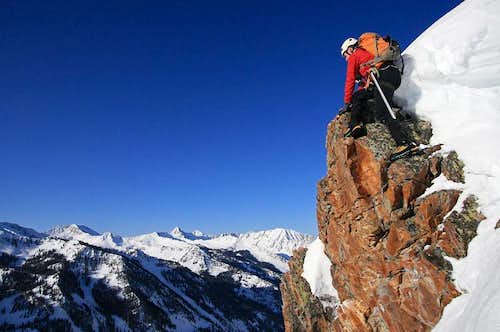 Exposed sections of the ridge, which are quite comfortable in the summer, become more unnerving as cornices swallow up the real estate. We attempted to chop a hole in this cornice, but the snow and ice was rock solid. 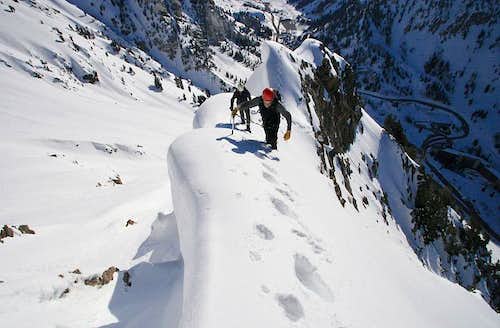 Looking down the first narrow section of ridge, with a beautiful cornice peeling over the east side. 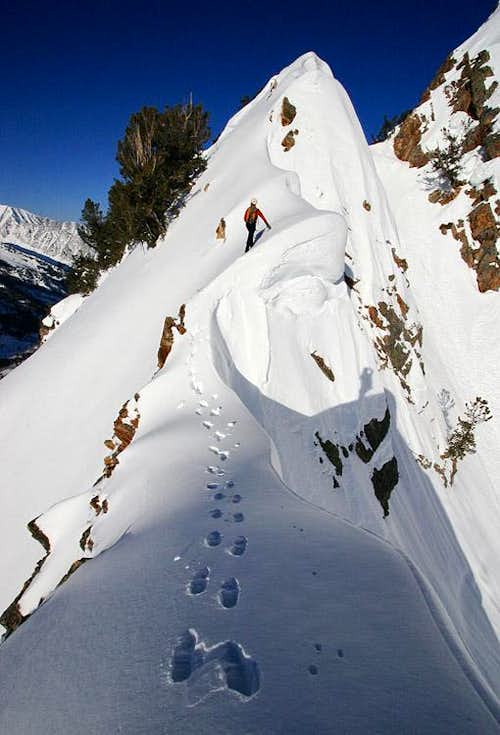 The final section of the first narrow ridge on the south ridge route. This section of ridge ends at the top of the Suicide Chute. With some exposed rocks and horns we could have used a running belay, but with all this snow, the rope would only assure that we all died together in a fall, so we kept the rope coiled away. 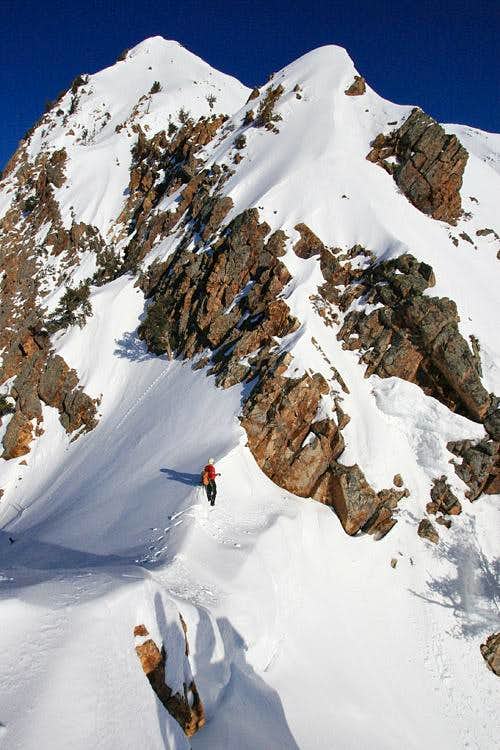 The view up the middle section of the south ridge as seen from the top of the Suicide Chute. This was a great spot for a rest. 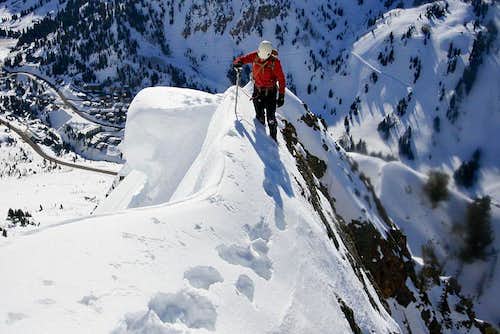 Above the Suicide Chute was a 60-degree slope that I didn't bother to take a photo of. I just wanted to climb up it fast. After that fun, we got back to narrow ridge lines. 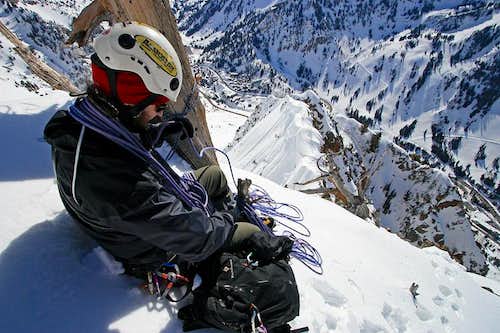 Along the entire route there was so much snow that protection was few and far between. This was the best belay all day. 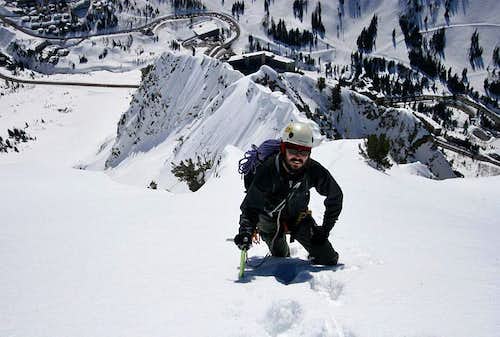 A nice mild section of climbing just over midway up the route. On these broad sections of the ridge the snow was a bit soft, but still powdery so trailbreaking wasn't too hard. 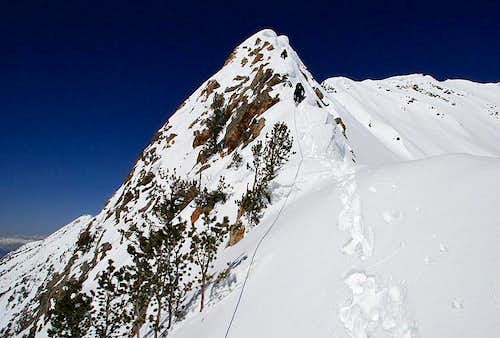 This was the first really exposed move on the route. Although the camera doesn't show it too well, the rocky areas in the middle of the photo required some of those full-commitment moves. Glenn found some good protection by wrapping a sling around an ice column under the overhanging rock. 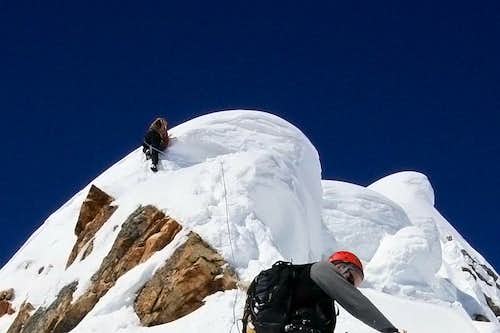 A close up of some of the huge cornices. 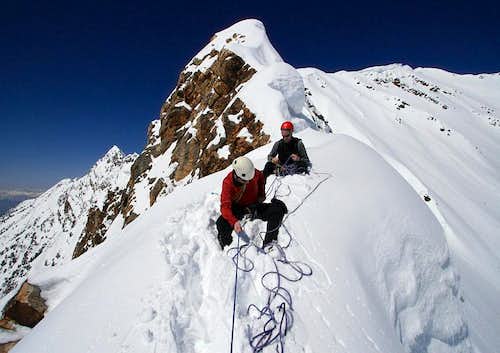 Other than the tree belay shown earlier, the rest of the climb was boot/axe belays and the like. 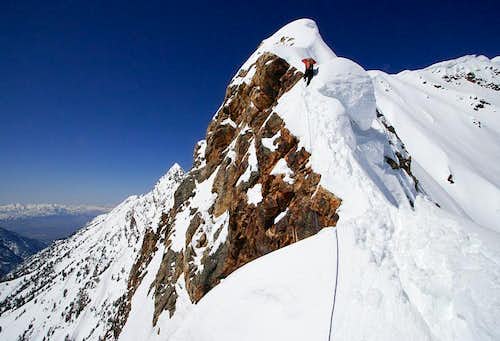 The last section of exposed climbing on the south ridge. Again, the camera doesn't do this justice. Before Glenn placed his steps, this was a thin fin of sugary snow and it was very hard to tell where the rock ended and the cornice began. Although we all pulled our share of leading, Glenn took the two most difficult sections, which earned him the "balls of steel" award. It was some fine climbing. 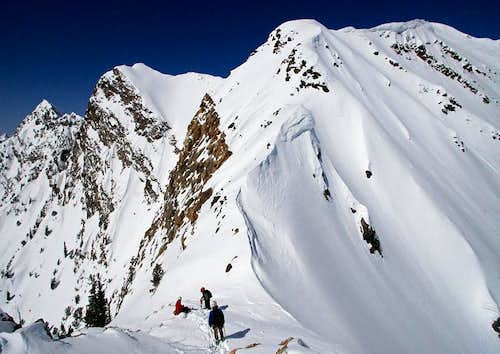 After the last exposed section of ridge, it was time to relax and coil the rope. What a climb this was turning out to be! 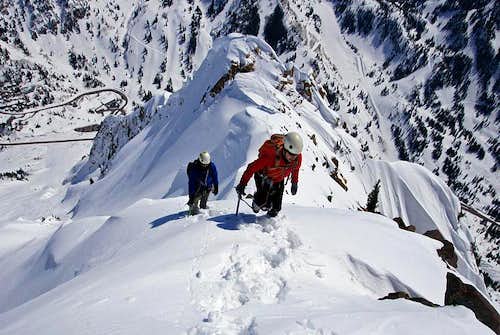 Taking the last section of the ridge to the summit. Most of the south ridge is visible below. 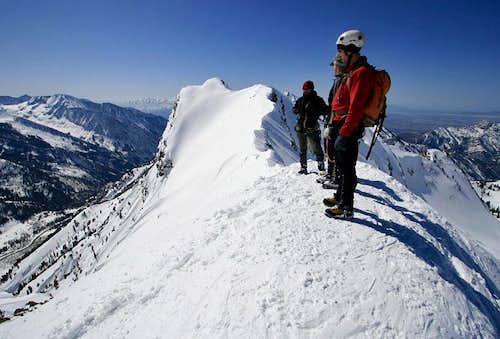 The summit of Mt. Superior with Monte Cristo in the background. Days like this make you pinch yourself to assure it's real. 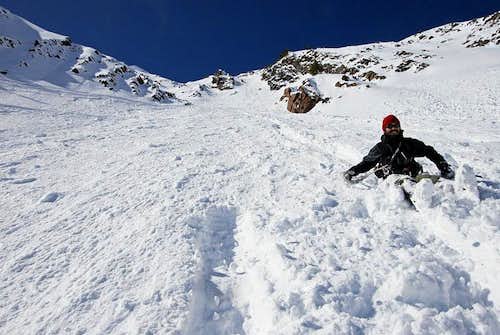 Traditionally we would walk down the east ridge route, but with the stable snow, how can you resist a glissade down the south face of Superior? During our climb, we watched three groups of skiers put lines down the south face, so we decided to join 'em. 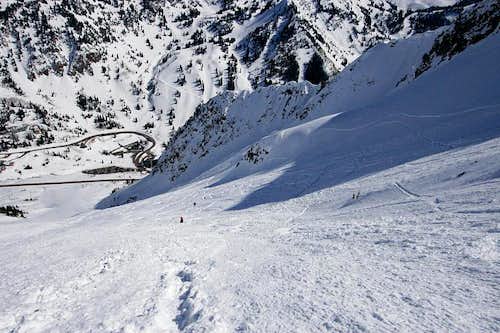 In the soft snow we could only glissade so far, the rest was postholing...fun. I swear my hips and thighs nearing exploded by the time we reached the road below.

How would we sum up the day? Unspeakable! Great partners, stable snow, perfect weather and spectacular surroundings. Ah, the mountains, it doesn't get any better.

Proof that it takes more than a camera and a good eye to get a great shot.

Awesome pictures, of what one can tell was an awesome climb. I was skiing over at Alta why you guys where climbing, and several times I took at my binoculars to spot you, but wasn't lucky enough to see you.

Just reading this report gives me butterflies in my stomach! What an experience! From your pictures and description it looks and sounds like it was an incredible climb. Glad you could enjoy the perfections of the day and one killer route!

By the way marauders, your pictures are amazing!

I can't believe I slept through my alarm...

It looks like you guys had a great time. Nice pictures, and nice job on a beautiful route.

Love the great pics and trip report. Congrat's on a great day in the mountains.

Matt, your photos confirm again why Utah is such an awesome place to live. Good job guys.

What a day out!

I've never seen so much snow on the South Ridge. The crux rock move appears to even be snowed over! (Photo 12) It looks like a completely different climb than any time I've been up it.

...for all the great comments. We'll have to get another SP climb together soon.

A jolly good outing I must say.

Nice job on the climb and the TR, but especially the photos!

This was a fantastic trip report! Thank you for sharing.

A quick question: As a climber who cares about taking great pictures, what photography equipment do you carry on a typical mountaineering adventure? (camera, lens etc.)

Thanks for the compliments. I use a digital SLR camera, specifically the Canon 30D. I carry it in a Promaster bag (I mention the brand because it's the only one I've ever found that keeps the snow out without having to zip the top. I just use the clip, so that I can pull out the camera fast.) I clip it to the side of my pack. At first it was heavy and a bit awkward, but you get used to it. I compensate by putting water, etc. on the other side of the pack to balance it out.

As far as lenses you have to have an ultra wide angle lens to get any descent ridge photos. I use the Canon 10mm-22mm lens. I also carry a Canon 24mm-105mm lens for closer photos, flowers, animals, depth of field, etc. I carry that in a Lowe Pro lens holder on my other side so that I can change the lenses back and forth quickly. Other than that, a circular polarizer filter, lens cloth, extra batteries and memory cards.

The trick is to take tons of photos without interrupting the rhythm of the climb. Sometimes I don't succeed with that goal, but my partners are cool and appreciate the end result. I've become a lot faster over time so hopefully the camera doesn't get in the way too much.

This was SUCH a helpful reply! Exactly the information I was looking for :)

Ya know...it might be worth it, one day, to post an article about photography and climbing, like some tips of the trade you have found helpful! That would probably be super helpful for a lot of people.

I appreciate the comments. My website is fun hobby.

As I realized in the 1950s, you have to climb the peaks in the Wasatch during the winter to dulplicate conditions you would find in the Alps the year around. Great pictures. If it weren't for the trees, I could be fooled that you were actually in the French Alps.

Killer photos on your profile page! You were climbing the Wasatch 25 years before I was even thought about!

In 1950 when I climbed the Grand Teton, one could not find an ice ax in Utah. I never saw crampons until I went to Mexico to climb Popocatepetl in 1951 and bought some crude Mexican "spiks" along with an ice ax.
Back then mountain climbing was limited to eccentric individuals who belonged to the Wasatch Mountain Club and practiced rock climbing on Pete's Rock under Mt. Olympus. Compare those conditions with today's broad popularity of the sport which attracts millions and people no longer question what idiocy makes people want to climb mountains.