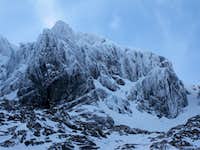 No.3 Gully Buttress
Aphrodite is one of the best mixed climbs on No.3 Gully Buttress in Ben Nevis’s Coire Na Ciste. It’s rated Scottish IV,4 but is generally considered to be a hard IV. It’s a bit of a wondering route. The lower pitches largely involve a traverse from right to left in order to gain an icy groove which is then climbed to the right of Green Gully. This icy groove leads to an arête which is climbed to the top of the route. The route totals 200m.

Next, walk for around 90 minutes (give or take depending on snow conditions) to the CIC hut beneath the North side of Ben Nevis. The trail initially climbs though a lovely pine forest, reaching an upper car park in around 20-30 minutes. A number of years ago, the upper car park was reached by way of a steep and terribly eroded, often muddy, path but fortunately things have improved.

From the upper car park, climb over the style and follow the trail along the Allt a’Mhuilinn stream south-west to the CIC hut. The CIC hut is largely invisible until within close proximity of it. From the hut take in the wonderful views of Coire Na Ciste.

To reach No.3 Buttress head in the direction of No.3 Gully located at top of Coire Na Ciste. Aphrodite climbs to the right of Green Gully however the route begins higher further right of this and traverses in right to left.

Unfortunately I didn’t take many photos as was concentrating on trying to complete the route. The route is shown below: 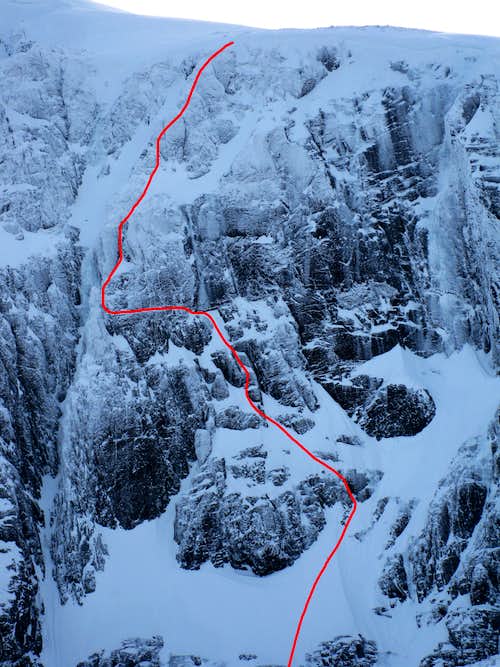 Aphrodite (IV,4) on No.3 Gully Guttress

Looking up the route from its base
The route begins at a point approximately midway along the No.3 Gully Buttress. Climb the snow slopes at the point where the slopes penetrate to the highest point on the buttress. Bearing right would take you towards the No. 3 Gully Buttress Original route (Scottish III). Instead climb a short icy gully (approximately 3m in length) directly ahead that cuts through a short band of rock and then aim for the second snow ledge halfway up the face and at the top of the slopes.

Climb the groove which is beside a rib immediately right of Green Gully. The groove offers the best climbing on the route with the upper half marking the crux with sustained delicate footholds and hooks but good protection if you can find it.

Belay at the top of the groove from where there are good views into neighboring Green Gully. Continue to climb arête to the right of Green Gully. Alternatively you can always break off the Aphrodite route and enter Green Gully (IV,4) although the top pitches are straightforward for the grade. 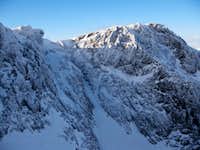 No.4 Gully & Trident Buttress
No.4 Gully is the obvious decent route. This easy snow gully offers a straight-forward descent to the CIC hut to the north in good visibility. The top of the gully has a metal marker post with the number 4 drilled into it (GR 158717 – GPS NN15821 71733). Sometimes the cornice can be a problem necessitating an initial snow bollard abseil but usually there is a section of cornice dug out from below. Also, it is possible at times to move a few metres to the north, along the rim and gain access to the gully down steeper ground. Avalanches have occurred in this gully and the initial entry can be steep, but it soon eases.

Bring plenty of nuts and some hexes as you will place these most.

An angled peg or two is also very handy. It’s quite likely that that the peg I smashed in at the crux is still there! Bear in mind that smashing pegs into Scottish rock is generally considered unethical by local Scottish rules so don’t use them unless you absolutely have to.