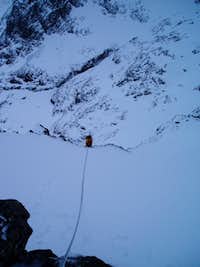 The route is located on the Carn Dearg Buttress on the Northern side of Ben Nevis and is accessed via Gully No. 5. The lower half of the route constitutes easy ice climbing whilst the upper half opens out onto a ridge with fantastic vistas that leads to the summit of Carn Dearg Buttress.

The route offers plenty of rock and ice protection and can easily be soloed for people adept at climbing higher grades. The route can even be used as a more interesting descent than down Gully No.5

The route was first climbed by an SMC party during Easter 1897 (two years after Gully No.5 was climbed). 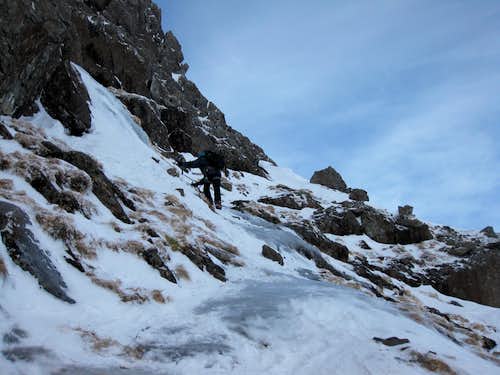 Near the start of Ledge Route

Next, walk for around 90 minutes (give or take depending on snow conditions) to the CIC hut beneath the North side of Ben Nevis. The trail initially climbs though a lovely pine forest, reaching an upper car park in around 20-30 minutes. A number of years ago, the upper car park was reached by way of a steep and terribly eroded, often muddy, path but fortunately things have improved.

From the upper car park, climb over the style and follow the trail along the Allt a’Mhuilinn stream south-west to the CIC hut. The CIC hut is largely invisible until within close proximity of it. From here take in the wonderful views of Coire Na Ciste. The start of the Ledge Route is invisible from the hut. Look for the Curtain (a famous and prominent ice route) of Carn Dearg Buttress and the climb ascends from left to right along a ramp above this. It then climbs the ridge immediately right of Gully No. 5

By Ben Nevis standards, the Ledge route is easy to reach from the CIC hut. Climb West towards Gully No. 5, located left of Carn Dearg Buttress and right of Trident Buttress. Climb Gully No. 5 a short distance (around 100m) to the base of the route of the right hand side.

There are two starting points for the Ledge Route. A more interesting ice ramp ascends from a lower point out above the top of the Curtain onto a broad, flat ledge which fades out right. Before the ledge narrows, leave it by a left slanting gully, which leads out onto a broad sloping snow shelf. Be careful here as there can be avalanche risk if significant fresh snow has accumulated.

A second starting point begins 20m higher and follows an easier but less interesting shelf to the snow shelf described above.

The route now follows the ridge to the summit of Carn Dearg. For the large part, the ridge is a winter scramble although there is a moderately tricky move immediately above the snow shelf that is fairly exposed. On a Clear day the vistas from the ridge are awesome with Tower Ridge and North-East Buttress to the South-East and Castle Ridge to the North. There are also lovely views to the peaks to the West beyond Fort William

The quickest descent is down Gully No.5 provided it is same to do so (check avalanche conditions). Another easy option is to descend down the gental North-Western slopes of Ben Nevis in a bee-line towards the upper car park. Once you're off Ben Nevis's slopes follow a broken metal fence and it'll lead you directly to the car park (although you'll need to cross the Allt a’Mhuilinn stream immediately before.

The amount of hardware you bring for the climb largely depends on how confident you are on Scottish II terrain. There are plenty of cracks for good rock protection and likely enough ice build-up to sink some screws. Slings are also very useful for any route on Ben Nevis.