Too many people in the backwoods community, whether it be backpacking, climbing, hiking, snow sports, etc, think of the Adirondacks and think of the High Peaks, Lake Placid, Whiteface, and the likes of those grand images.  However, there is so much to this region beyond the impressive views from atop Mt. Marcy, "the cloudsplitter;" Afterall, it is the largest park in the Lower 48.  Whether you are north of 9N, or just in the foothills from the south, there are millions of views that are just as impressive and magnificent as the last.

At a mere 2350 feet above sea level, Bald Mountain, topped by the Rondaxe Fire Tower, is one such mountain with an incredible view over the Fulton Chain of Lakes in Old Forge.  The trail is a wonderful hike through the woods, that gets a lot of foot traffic by families visiting Old Forge in the summer, but in the winter the trail is nearly deserted and full of character and solitude.  With only 500 feet of evelvation gain over a mile, this trail is perfect for a family outing of young and old with a wonderful vista perfect for a picnic on the sun-warmed "bald" peak.  Younger children will love the muddy trail, with steeper sections of "scrambling", i know I certainly did as a youth.

Despite being the most common name, it was named Bald Mountain in 1912, when a firetower was erected on its summit.  The firetower was named Rondaxe after Rondaxe Lake nearby.  Firetowers were very popular for spotting forest fires in the lands below.  They were usually paired with a cabin nearby, in which the caretakers resided in allowing them to keep a constant vigil over the surrounding lands.  They are no longer in use today due to advances in technology, however several of the states fire towers have been restored and can be visited by the masses.  There is a Firetower Challenge which is described in much more detail here: https://www.summitpost.org/adirondack-fire-tower-challenge/653067

Bald Mountain trail head is located off of Rondaxe Road which is off NYS 28 just outside of Old Forge.  There is no fee for parking or day use.

The Route is extremely simple to follow as the trail climbs 500 feet in elevation in a little over a mile.  Just follow the red markers through the trees, (or the badly eroded trail), and stay on the yellow paint along the bald face.  As mentioned above, it is a great trail for a family outing due to the easy grade up the majority of the trail.  There a few sections that start to get a little steeper, but nothing too strenuous. 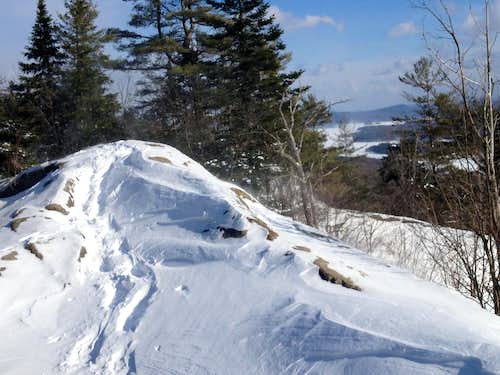 DO NOT DEFACE THE FIRETOWER

Several people have gone through great lengths to restore this part of Adirondack history, please respect it.

Pack it in, Pack it out!!! Nobody likes the solace nature provides being littered with someone elses trash.

Anytime of year is a good time to hike or climb.  The fall foliage of the Fulton Chain is incredible by late September from the summit.  The summer, makes for a beautiful day hike followed up by ice cream in any of Old Forge's great ice cream parlors.  Summer sunrises are beautiful and this is a fairly easy hike by headlamp in the pre-dawn hours.  Forth of July or New Years Eve fireworks over the lake are also awesome to see.  Winter snowshoeing up the trail is ideal, as Old Forge gets an incredible amount of snowfall; no bugs and less traffic, makes for a perfect hike in solitude.  Spring time makes for a muddy trail, which has its own element of ejoyment (provided you don't mind getting dirty). 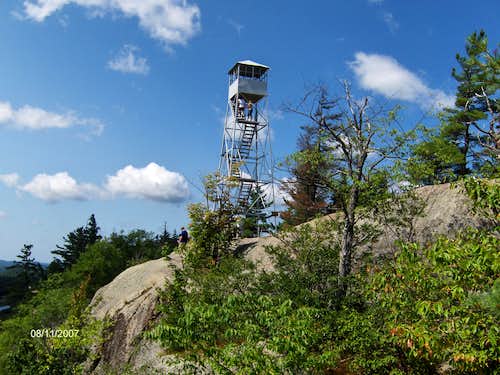 There are lots of campgrounds in and around Old Forge, Nicks Lake was always my favorite as a child.  There is a new camping "resort" less than a mile down the road right next to Water Safari.