Standing alone in the St. Huberts area as the twelfth highest in the Adirondack range and is one of the more dramatic peaks in the park. The peak has two dominate ridges that meet at the summit to form a large basin or washbowl on its western side. The peak is also crisscrossed by slides that give is a most dramatic appearance. Even though it looks to be quite a hard peak to get up it is actually one of the more most pleasant mountains to climb in the area.

The normal route up the Ridge Trail is long but not overly steep, it has great sections of exposed rock with some minor scrambling, there are a number of good lookouts along the trail and the summit is mostly bald and offers the best view of the entire great range as well as Whiteface, Easter and the Dix range.

Giant is also famous for its many slides most of witch were formed in one night back in 1963, qhen a great storm cut huge swaths downs its slope. So far there are at least 8 slide routes up its differing faces offering a challenge from class 2 all the way up to true class 5 climbing in some places.

The normal route is up the Rige Trail is an ideal day route for young kids they love the scrambiling and open sections but beware of the look out over the washbowl as it is a sheer 100m drop that can be hard to see at night or in bad weather.

This peak makes a great day trip but in summer bring plenty of warter are there are no safe water sources along the way.

If one takes the Roaring Brook trail trail back down from the summit (you can link up with the normal route lower down on a cross-over trail at the Washbowl) one will get some impression of what it was like in the dacks before the loggers moved in. In one section there is a vast hemlock forest with truly outstanding trees some 1 or 2 meters in diameter.

There is a free parking area on rt 73 about 3.3 miles from Keen valley. 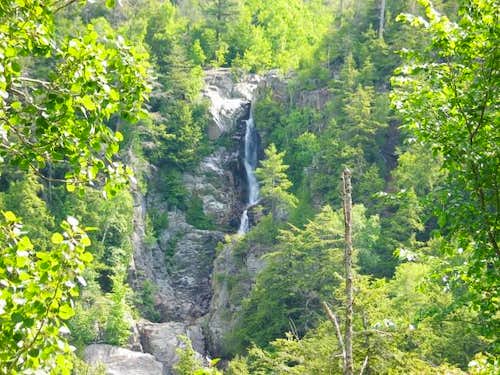 This peak is not in the High peaks area so a day permit is not required to climb it.

The trails can be very wet in spring but are dry for the summer. In winter there tends to me more snow than ice on the trail as it is basiclaly facing north west so snow shoes are a must.

1) No Camping above 4,000 feet
2) No camping withing 150 feet of a stream or other water source except at a designated campsite.
3) No soap or washing withing 150 feet of water
4) Pack it in Pack it out is the rule for garbage
5) Only dead and down wood can be used for fires and set in a proper fire pit. ( local etiquette is to use a stove and not a fire)

What's in a Name

The old local name of the Peak was "Giant of the Valley" and when views from further up the valley it does appear to have a large number of summits and it totally dominates the east side of the valley. The simple name Giant is the one that has stuck over time even though it doesn't look like a giant when one is actully in the valley.

The first non-native ascent and first ascent of any 4000ft peak in the Adirondacks was by Charles Brodhead during the 1797 military survey. His party cut its way up the East slope and then down the West and according to most climbers, locals and the guidebook no-one has done it since.