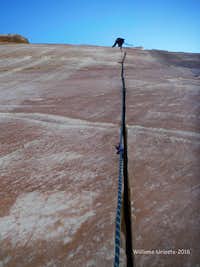 The best collection of splitters in Capitol Reef National Park is without question Basketball Wall. You will not find this many perfect splitters in close proximity anywhere else in the park. Capitol Gorge, for example, is much more spread out. Four have been published and several others have fixed anchors. The four published routes are all outstanding true splitters, each almost 100’ in height. All four are published in the Falcon Guide and Desert Rock. The best of these outstanding four is Phi Slamma Jamma, 5.11d. Phi is listed as 5.11d in the Falcon Guide and 5.11+ in Desert Rock. Ruckman and Cornacchione established all four routes in 1993. 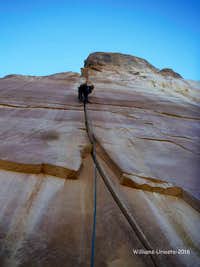 In order of difficulty, White Boys Can’t Jump (5.10a) could easily be 5.9 in Zion. I thought Bench Warmer (5.10a), even though it used a corner for sections, was more technical than White Boys. Followed by Foul Line (5.11c) and Phi Slamma Jamma (5.11d). There was at least one more mixed with these four that I spied an anchor on, but did not climb, that looked 5.9 from below.

Basketball Wall is the high butte located approximately five miles from the visitor center towering over the scenic drive road. You will notice that heading straight for the wall looks precarious at best. There is no established trail of any consequence but we found a fairly mellow ascent and made short work of it. Park below the very north end. Look to gain a red ridge line coming in from the north. When it hits the lower rock band which is the main impediment to accessing the main wall, traverse right to any number of short 5th class break-throughs (albeit chossy). Once through this crux on the approach, continue to angle up and right using an obvious semi-detached tower located in the beta photo above as your target. Most of the routes are to the left of this tower, Phi Slamma Jamma is to the right. Basketball Wall's independence from the cliff becomes more apparent when you are walking along its base. It provides great shade (west facing) in May/June until early afternoon. It is a great position in terms of views and easy to traverse back and forth along the wall. 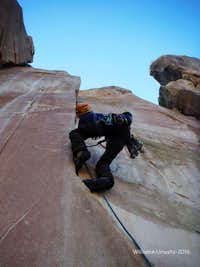