The Superstitions may be one of the most rugged ranges in Arizona. With deep canyons and rock spires, the range is a playground for hikers and climbers. One of the best scrambling routes in the Superstitions can be found on Battleship Mountain, a mile long fin of volcanic rock with deep canyons on both sides. With surprisingly solid volcanic rock, plenty of exposure, tricky route finding, and a beautiful desert approach, Battleship Mountain has something for everyone looking for a solid outing in the Superstitions.
While the climbing is no harder than steep class III, there are sections with 1000' drop offs on both side, reminiscent of Angel's Landing in Zion, minus the cables. This probably isn't the best summit for someone not used to some spicy climbing, but is a summit not to be missed by experienced Phoenix hikers.

The best approach is via Boulder Canyon, which can be reached by a number of trailheads including Peralta and Tortilla Flat. However, the shortest is via First Water Trailhead, which makes for an 11 mile outing. To get to the First Water trailhead, head east from Phoenix along route 60. Exit at Idaho Road/ AZ-88 (exit 196) and turn left (north). Continue north for 2.3 miles and turn right onto AZ-88 Apache Trail. Continue on this for 5.2 miles, past Lost Dutchman State Park, to the signed turn off for First Water Trailhead. Turn onto this dirt road and follow it to the hikers trailhead 2.3 miles in. 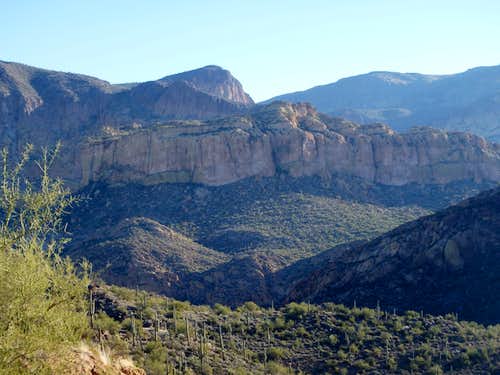 Battleship above Boulder
Approach via First Water Trailhead: Head out on the First Water Canyon Trail and take a left at the first junction with the Second Water canyon trail. Stay on this trail for about 3 miles, passing an intersection with the Black Mesa Trail, all the way to Boulder Canyon. En route you'll pass several springs near the bottom of Second Water Canyon which typically has reliable water. Once at the signed intersection with the Boulder Canyon trail, head right, upstream, with Battleship Mountain looming above. The goal at this point is to obtain the narrow mesa just south of the summit ridge. To do this requires about a mile of hiking upstream to meet a ridgeline coming off the mesa to the southwest. This ridgeline is well cairned with minimal bushwacking. The grade isn't terrible, so if you're getting into class III, you're way off course. The cliffs of the southern mesa are in view the entire time from the time you leave the wash, so if the you can't see them from the streambed, you're not yet there. Take the ridgeline to the tan, mesa cliffs and pick up a good use trail which traverses the highest cliffs to the west. 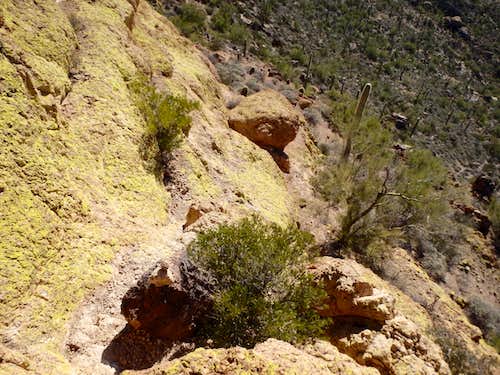 Start of the Climb
The climb: Traversing along the west side of the cliffs, you'll encounter a large, moss-covered boulder with a large Palo Verde tree just past it. Here you leave the trail and start climbing. The easiest route seemed to be using the boulder to get onto a shelf and traverse to the left to find an easier line. This will bring you to the top of the mesa, make a mental note of where to drop off for the return. Follow a use trail along the mesa to the north. Shortly before a narrow notch, you'll need to drop of the mesa via an easy ramp off the west side. Cross the narrow section to get you to the summit scramble. From this point on there's a lot of scrambling, and anyone with reasonable route-finding skills can make their own way, assuming there might be one or two places that require some backtracking. 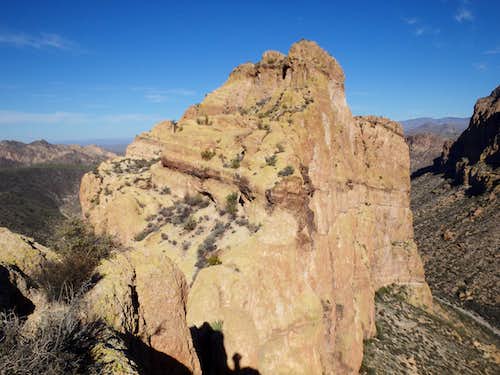 Second Narrow Section
For those that want the gory details: Cross the gap and climb around the rocks up and to the left, where you'll find a quick crack to climb up. From atop, you'll find you're faced with a series of parallel rock fins, where you'll need to climb from one to the next where ever convenient. The goal here is to aim for a shallow drainage with a large saguaro in it, the only large saguaro along the ridgeline. Once in the drainage, follow a use trail along the ridge. Look for a cairn to the left, which leads to a crack to drop off the ridge to get to an even narrower section. Delicately cross the gap and follow the use trail to the left. Look at the rocks on the right and take a 20' class III crack head-on, the crux of the day. The holds are solid, and the exposure isn't horrible. Once at the top of this, you'll find yourself just below the summit, with cliffs above. The key is to follow a faint trail to the left, losing about 50' of elevation on "ball-bearing slope." Thankfully there's not much exposure here, but it is quite loose. Once down the slope, climb an obvious ramp and rock crack about 20' up to the northern mesa just below the summit. From here you can either climb the class III slabs straight up towards the summit, or hike to the left on the mesa to pick up an easy use trail which will bring you to the summit.
The summit views are impressive, with La Barge Canyon (good swimming holes) and Geronimo Head to the East, Apache Lake to the north, Weaver's Needle to the south, and the Flatiron and Phoenix to the west.

None. The Tonto Pass is not required for this trailhead, nor is a permit needed for backpacking. Just use common sense and follow Leave No Trace ethics.

A hike this long would be dangerous in the summer, and a few poor souls die every year trying for a long excursion in the Superstitions during 110+ degree summer heat. Additionally, a large portion of the approach follows several canyons including Boulder Canyon, which is prone to flash floods during monsoon season. Fall through spring are best. The springs in Second Water Canyon are reliable year round for water, although certainly need to be treated.

There are multiple camping options nearby, including developed campgrounds in Lost Dutchman State Park, and numerous backpacking opportunities. The best backcountry site would probably be off the Second Water Canyon Trail near the springs, which are fairly reliable year round.

A link to my trip report: The Mountains Are Calling

12 miles round trip and Boulder Canyon

We found this to be just about 12 miles round trip from First Water. You note the "best approach" is from Boulder Canyon, but don't give any further information. Some more information might be useful.