The Biancograt is one of the most popular and sought-after routes in the Eastern Alps. Strictly speaking it leads to the summit of the Pizzo Bianco aka Piz Alv (3995 m) and it is therefore also known with the name of Crast'Alva, meaning "white ridge". Generally speaking the route is not referred to this name as the Piz Alv is seen by most as just a fore-summit along the ridge leading up to the summit of the Easternmost 4000m peak in the Alps, Piz Bernina 4048 m.

The Biancograt is a stunning, knife-edge snow crest about 800 meters in length located on the Swiss side of Piz Bernina. The summit of Piz Morteratsch that lies just to the North of the Biancograt offers a stunning view of the ridge which really wets the appetite. Setting foot on the Bianco's brilliantly white and exposed crest makes you appreciate why it is sometimes referred to be as a "Himmelsleiter", a stairway to heaven! On a clear day the crest just seems to curve upwards towards the sky which has a deep blue color at this altitude, truly a sight to behold.

The route is graded at AD III and IV UIAA. However, difficulties are also dependent on the mountain conditions; if the snow is well settled and if a track has already been made by the parties that went before, difficulties on the ridge itself will be decrease. Fresh snow or hard ice will significantly increase the difficulties. Make sure to check the weather forecast and phone the Tschierva hut to see how things are locally. The guides' agency in Pontresina sometimes has useful information as well.

The route is usually climbed as a traverse, starting at the Tschierva hut and traversing the Piz Bernina to spend the night in the Rifugio Marco e Rosa,  which is just below the summit of Bernina on the Italian side of the mountain. Guidebook times vary but the traverse costs most parties about 6-8 hours. Keep in mind that this route is very popular and will therefore attract very large crowds. As a consequence, delays and traffic jams are almost inevitable. This is especially the case for the rocky intersection between the Piz Alv and the Piz Bernina, which contains the trickiest rock climbing and an abseil that can really cause queues to form.

The Bianco Grat is a serious alpine undertaking. The approach is quite long and the terrain varies from moraines to glaciers, a rock climb, the exposed Bianco Grat itself and a tricky, exposed descent along the Bernina South ridge, which is the Normal route on the Italian side. Due to the mixed nature of the route (the rock sections contain snow and ice) be prepared to climb the rock sections with crampons. Although the first rock climbing sections hosts a couple of bolts, deadly accidents still occur here far too frequently.

In short: the route requires a fair amount of alpine experience, but with good weather it is a very rewarding climb! 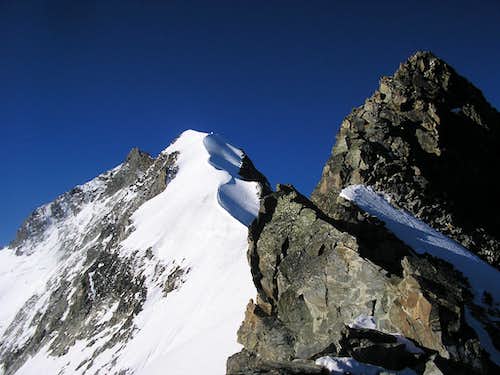 The Bianco Grat is climbed from the Tschierva hut,  which is run by the Swiss Alpine Club (SAC). It is a wide hut, but frequently fully booked due to the popularity of the route,  so make sure to phone ahead. The hut can be reached by footpath from Pontresina (where you can also park your car) in about 3 hours.

Alternatively many parties choose to combine the Bianco Grat with an ascent of the nearby Piz Morteratsch (3751m) on the day preceding the Bianco. Although the Tschierva hut is also well located for an ascent of this peak, it is perhaps more interesting to traverse it from East to West from the Boval hut. The Boval hut is easily reached on foot from the parking at the Diavolezza cable car station in about 1.5 hours. From the Boval hut it is then possible to climb the Piz Morteratsch and descend towards the Tschierva hut, see the Morteratsch page for details.
Good for acclimatisation as well!

From the Tschierva hut follow the footpath eastwards along the glacier. The path contains lots of scrambling and easy climbing so make sure your headlight has sufficient battery power. Going eastwards and steadily gaining altitude the path eventually becomes less distinct as you enter a rubble field. As you round the shoulder coming down from the Piz Morteratsch you reach the small glacier that leads you underneath the Fuorcla Prievlusa which is the col from which the ridge is gained.

There are two ways to reach the Fuorcla; the first one is by crossing the glacier to the broad rocky ledge on your left-hand side and climbing the klettersteig (via ferrata) from there to the col. Alternatively you can continue upwards via the steep icefield (50 - 55 degrees). Note that the notice board in the Tschierva hut discourages this approach because of the danger of rockfall (at least in 2007 it did!). We chose to take the via ferrata which is found by walking leftwards across the broad rock band. Make your way up to the col, being careful not to dislodge any stones on the parties below.

From the col the ridge is still rock at first and about 4 or 5 rope lengths of II/III degree climbing lead to a broad plateau on top of the ridge. There are some bolts in place and although the climbing is not difficult, the rocks can be quite loose in places.
From the top of the rocky section carefully make your way past the left-hand side of the last rocks. Climbing up a steep (45 degrees) but very short section of snow/ice puts you, finally, onto the 'real' Bianco ridge!
How to proceed is somewhat dependent on conditions. We found the ridge in excellent shape and climbed it unroped. Enjoy!

From the Piz Alv the snow makes way for a longer section of rock climbing with the greatest difficulty being formed by a gendarme (tower) which is climbed directly. Firstly proceed along the top of the ridge towards the obvious abseil point. Once the queue has gone and you have abseiled towards the foot of the tower, climb it directly and downclimb/abseil on the other side. You are now at the foot of the last steep section of the ridge leading up to the Piz Bernina. We found it to contain more snow than the rest of the route but it was also quite easy. Some may choose to unrope here. Climb upwards and make your way to the Bernina's summit without exceptional difficulties.

To reach the Rifugio Marco e Rosa climb down the Bernina's south ridge. This is an exposed rock/snow/ice ridge which is technically not difficult but requires sure footing. A slip can have grave consequences in this part of the route!
After a while the ridge becomes less exposed and a short section of downclimbing over rock leads to 3 abseils down the glacier above the hut. Watch out for crevasses and make sure to check out the interesting combination of posters of naked female climbers and catholic imagery in this truly Italian hut!

Rope (single or 1 half of a double rope is sufficient), helmet, ice screw(s), vary numbers according to conditions, small rock rack (1 or 2 friends, slings), crampons and an ice axe, Clothing for high alpine tour. 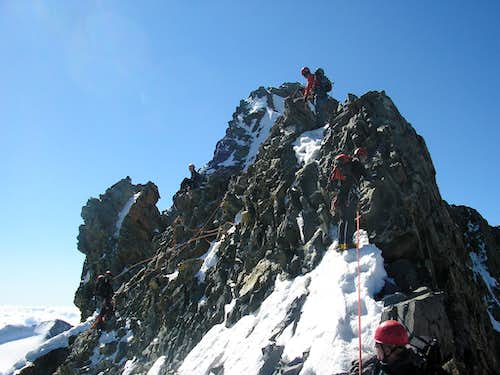 Chaos on the rock section between Piz Alv and Piz Bernina.

Switzerland is still out of Schengen, so you need passport or Identity card. No particular restrictions in climbing and hiking.