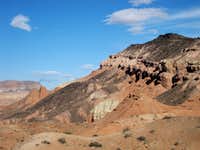 From a distance, Black Mountain seems to get its name from the trees that cover it and lend it its dark appearance in contrast to the bentonite badlands and desert flats all around it; it is easy to make this mistaken assumption because of the trees visible along its summit ridge, which can make one think they cover the rest of the mountain.

In reality, there are not nearly so many trees as there appear to be, and the mountain’s dark color comes from all the black volcanic rocks of all sizes that are strewn about its slopes and ridges. Lower down, the mountain consists of colorful sandstone cliffs similar to those found in nearby Cathedral Valley, but there is an abrupt transition to the black rocks that dominate the peak’s upper body.

Not a lot of people are going to be interested in a peak like this, for it is remote, the driving approach can be long and dusty, and there are no trails. But views are superb, and lovers of solitude and desert peaks will not regret having made the trip out here. If you like feeling as though you are in the middle of nowhere, this peak will give you that.

There are at least 16 peaks named Black Mountain just in Utah. This Black Mountain is the one a few miles west of Factory Butte. It rises near the head of Caineville Wash and is the highest point for miles around. Local ranchers call it Black Hill, but it is Black Mountain on topographic maps. There is another Black Mountain not far to the northwest, so make sure you are not confusing the two. 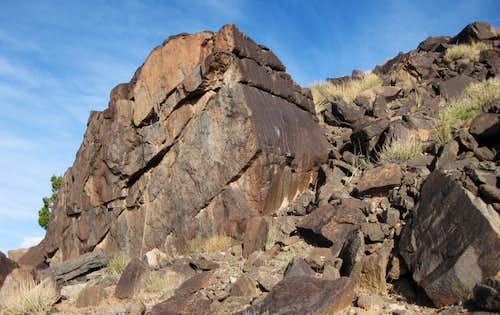 9.5 miles east of the boundary of Capitol Reef National Park, turn north off Utah 24 and onto signed Caineville Road. This road is dirt, sand, and clay. It is passable to most vehicles in dry conditions, but when wet it can become a greasy morass that not even 4wd vehicles can negotiate. Enjoy the very scenic drive through colorful bentonite badlands; at dawn, the scenery hues are amazing.

At about 11 miles, the road makes a pronounced shift to the west and leaves the badlands for the open desert plains as it approaches Lower Cathedral Valley. If this happens, you have gone a little too far. 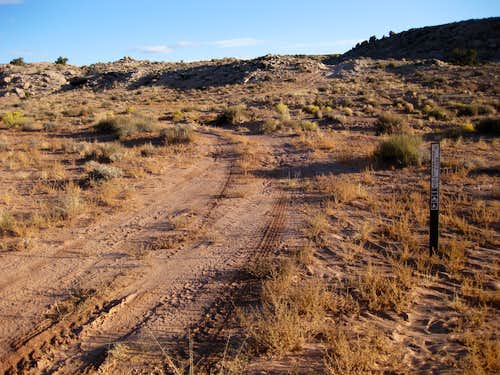 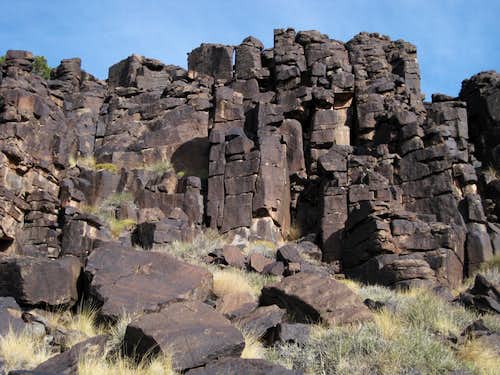 Elevation Gain: Approximately 1000' (a cross-country approach will entail some ups and downs but nothing too significant if you read the land well and choose your route carefully)

Details: The easiest way to approach the peak is probably to head up Caineville Wash, which leads to the base of the peak. It may not be the most direct route, but it will reduce the chances of getting lost and will avoid the ups and downs that a cross-country approach will entail.

I chose a cross-country approach from the 4wd road mentioned in the previous section. There was no particular reason; I think I just liked the idea of finding intead of following a route.

It would be hard to get truly lost out here, for from the higher ridges, one can always see either the main road or where it runs. But it would be easy to miss your exact starting point on the way back, for the area is a maze of badland ridges and small washes, and anyone not intimately familiar with the landscape here, and there are probably few, if any, who are, is likely to feel that all the ridges and washes look pretty much the same.

It is therefore advisable to do any or all of the following along your approach:

• Build cairns as you go (and dismantle them as you retrace your route).
• Use a GPS device to create a track and waypoints (I did this).
• Use a digital camera to photograph important landmarks and use the pictures to orient yourself on the way back (I did this, too, though I ended up not needing to use the pictures).
• At least make a mental note of important landmarks (did that as well).
• Set your car on fire so you can follow the smoke to its source on the return journey (not really a good idea).

Anyway, my cross-country route followed some washes and went up and down some ridges between drainages until I was close to the peak. There, I noticed a deep drainage between me and the peak, but I also found a "bridge" of sandstone at the head of the drainage, and it provided easy access to the peak itself. I then hiked and clambered up the slopes until reaching the long, plateau-like top. Shortly below the summit, there is a cliff band, but there is a break that allows easy passage near the western end. The cliffs themselves provide some short but fun scrambling if you'd like to spice the route up a bit.

The summit has astonishing views across some of the wildest, emptiest terrain in Utah. The cliffs and domes of the Waterpocket Fold in Capitol Reef National Park are in the western distance; closer but still far away to the west are the monoliths of Lower Cathedral Valley. The labyrinthine badlands and drainages of Wood Bench spread for miles below you. Cedar Mountain and East Cedar Mountain dominate the otherwise-flat expanses to the north, and to the south, the Henry Mountains rise in the distance and the bentonite badlands around Caineville Wash fill the foreground. To the east, you can see Factory Butte, not too far away, and, farther, Little Wild Horse Mesa and Temple Mountain in the San Rafael Swell. It is unlikely that more than a few people behold this view in any given year, so savor it.

For my return route, I selected a course along badland ridges that I hoped would minimize the ups and downs resulting from climbs out of and into the washes. It was a little longer than my approach route in both time and distance but did reduce some of the up-and-down travel. Overall, though, it made little difference. 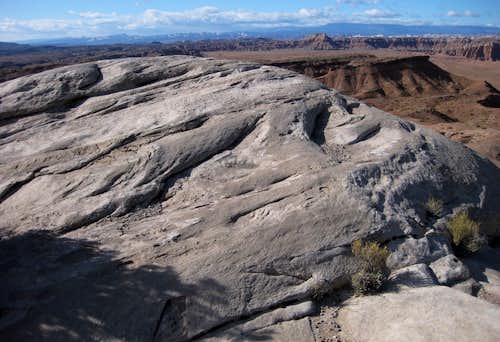 BLM land-- no fees or permits are required.

Avoid walking on the biological crust out here; it is alive and is critical to the desert ecology, and it is fragile. If the soil looks lumpy, dark, or crusty, avoid it. Better yet, try to stay on exposed rock and in sandy washes as much as you can. 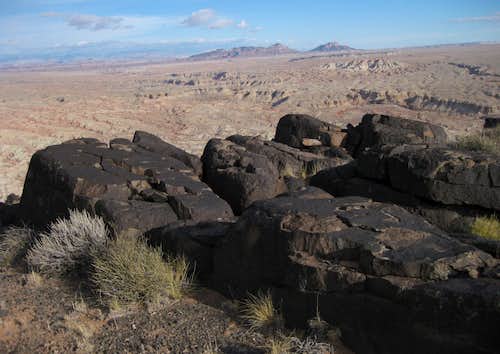 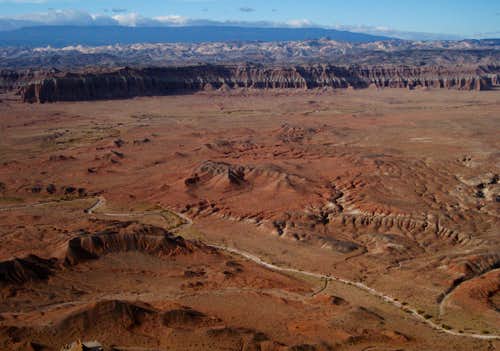 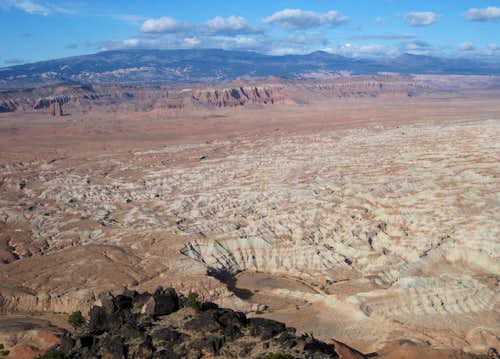